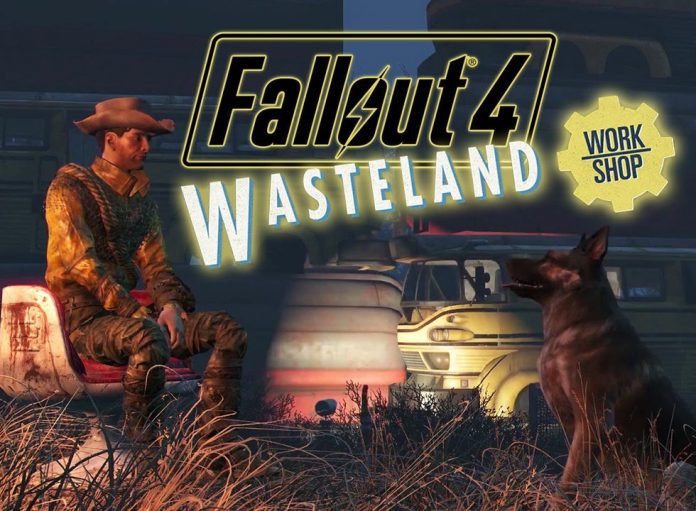 Did you miss any details? We’ll point some out for you.

In the opening shot of the video, we see a Mirelurk Queen, one of the Wasteland’s biggest and baddest enemies. There’s nothing terribly remarkable about this enemy, except where it’s located. The Mirlurk Queen appears to be at the southern border of the Sanctuary Hills settlement, which would be a major development. This likely means Bethesda revamped some of the settlement attack mechanics to vary enemies (they added Rust Devils as part of Automatron, and they will occasionally attack settlements).

The next couple shots are nothing new, until we see the Sole Survivor sitting with Dogmeat. In this shot we’re treated to obvious new additions in the tractor trailers and school busses. It appears players will also be able to stack these structures, making for some impressive walls.

The following shot features the Sole Survivor on a dock, but there are tons of new items present. They include: functional street lamps, new wall options, new stair options, sconce lighting, lanterns, fire pits, and shop lights. You can even see that the new street lights require direct power lines, instead of drawing power by being in the vicinity of power conduits or pylons. This is a nice addition, because it affords players both light and heights for power cables.

The following shot is set at the Jamaica Plains settlement and showcases the addition of gardening plots. These welcome additions will not only help you better organize your crops, but they make the oft-ignored Boston Airport settlement completely workable. Not a bad deal for four wood and one fertilizer resource.

In this shot we’re obviously meant to stare at the decontamination arch, but look at the workshop menu – there are new options for concrete foundations, concrete walls, and even concrete stairs. The introduction of the decontamination arch is interesting. Aside from just being a cool settlement addition, it also appears to have a purpose. The Sole Survivor’s voiceover says, “to hell with all this radiation!” It’s likely this new device removes some radiation, similar to RadAway. This is made more likely by the fact it requires two power resources. You might also have missed the Fusion Core reactor next to it in this shot.

For just a second in this shot, we can see there is an entire subcategory of concrete structures. I love using concrete in settlements, so this is a welcome addition. The following shots show some more options for concrete foundation, including some curved pieces. The next shot showcase a variety of concrete walls with wire windows. For this shot, we finally get our first peek at nixi-tube and neon lighting, which appears as its own category. We can also see that conduits can be placed in window frames, making the running of electrical wires easier for builders.

There’s a lot of stuff for the next shot, which is at an unknown location. Among the new additions are the the nixi-tubes lit up on the desk to the left (can we make our own clocks?), new letters that can be applied to surfaces like stickers, and new corrugated roofing. Also, the Sole Survivor whacks his head on the fan and groans in pain – a prelude to the next shot.

The next series of shots showcases some new base defenses being added, including gnarly spring-loaded impaling traps and slicing sawblade traps. There’s also some multi-colored neon lighting with a warm, welcoming message.

We then see the sawblade trap in action, spinning back and forth, but there are other things to notice in this shot, too. Among them are the new string lights we’ve desired for a long time and more neon lighting in a different color.

As the trailer’s creator continue to build his or her death maze, we get our first look at spike traps. It’s interesting to note that the only trap we’ve seen that requires power is the sawblade trap, meaning you can put the others pretty much anywhere. We also get to see a gunner and raider unwittingly fall prey to these new traps, and it looks painful. It appears that the spike trap resets itself (unlike flamethrower and radiation traps, for example) so this is going to be a new favorite for base defense.

The next section of the trailer focuses on creatures. In the first shot, we can see a variety of creature cages. It’s interesting to see how this mechanic works. If you look closely, the cage description reads “Chance to capture a mirelurk when powered. Shut off power to release captured creature.” It functions this way on all the cages, and there are quite a few in the trailer: mirelurks, deathclaws, dogs, and even cats (yay!). My settlements will soon be overrun with cats. But, just because you can capture these creatures, doesn’t mean they are tame.

Some of the more aggressive animals, like mirelurks and deathclaws will still likely attack on sight, unless you build a Beta Wave Emitter. This emitter is showcased in the trailer, and makes sure captured creatures won’t attack you or your settlers. Some perks are required to build it, however. You’ll need rank 1 of Animal Friend Wasteland Whisperer. There’s another emitter pictured in the menu, but it’s not showcased.

At last we see a functional battle area set up, with plenty of spectators. Someone in a suit of power armor is about to face a presumably massive creature. He’s standing on either a pressure plate or platform, which is a new addition. Also there’s another new lantern type visible in the shot, and again we see a fusion core reactor at the edge of the shot. The next shot reveals the creature in the cage is a deathclaw. We can also see traffic lights, which are a new addition.

In this shot, we can see another new street light design, new ceiling lights, a functional table lamp, and another fusion core reactor. There’s also some curved railing present.

The deathclaw swipes away the unfortunate human’s power armor helmet, revealing Preston Garvey. It appears a deathclaw needs your help, Preston. I’ll mark it on your map.

Lastly, the trailer features some new lighting options. We can see neon “open” signs, traffic lights, and blinking colored light bulbs. It appears Wasteland Workshop will not only gives us more lights to play with, but also the ability to control them.

Wasteland Workshop will be available to the public on April 12th, and is included with the Season Pass. To purchase the DLC separately, it runs a reasonable $5.

If you want to view the entire trailer uninterrupted, check it out below.