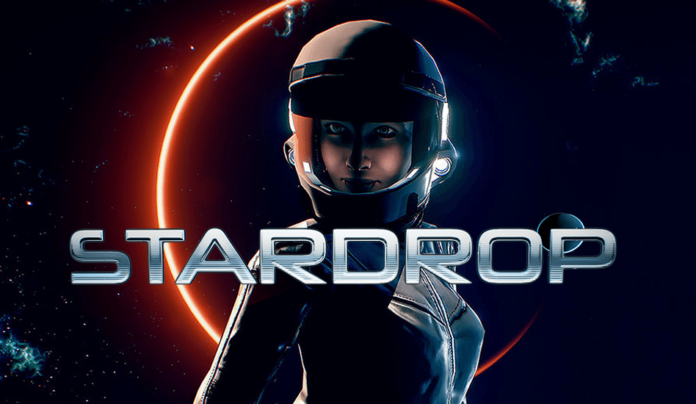 After playing the STARDROP Demo the other day I absolutely had to know more and I absolutely wanted you to know more as well. So I reached out to the crew at TeamV for a chat and was able to ask some questions of the Lead Developer- Joure Visser. If you are interested in finding out more, you can go to the STARDROP Official Website or their KickStarter site, both of which are linked at the end of the interview… as well as some RGM Exclusive Screenshots of the game that are as yet unseen parts of the game!

However first…here is their latest campaign trailer which dropped today:

Toolbox24(T24): Joure, thanks for agreeing to answer some of my questions on your Kickstarter project – STARDROP.

Joure Visser(JV): Hi Richard. You’re very much welcome I’m always happy to answer questions and try to explain some of the stuff behind the scenes.

T24: Can you tell us a little bit about how this all started? I mean, when did this go from being something you were thinking about, to something you are developing as we speak?

JV: Oh boy, how it all started haha. Okay, so, my background is modding, after that I got picked up by Monochrome LLC where I worked on Contagion which ran on the Source engine for around 5 years. Around 9 months ago I was put on a possible new project and I had to learn Unreal Engine 4 with practically no knowledge about it so I ran with it and I studied everything that I could (and I still am). The more I learned the more empowered I became. Suddenly I found I was able to do things that I could never do in Source. I was able to create characters and add in features where I could change the character speed, I could create various doors and doors kept opening. I’ve always wanted to make my own game at one point and without going into any detail I already knew my time with Monochrome was coming to an end. It’s just something I knew based on my entire relationship with the company. During working there I got married and my daughter was born a year after, which we didn’t plan and everything changed. So all these elements where floating around and the final “eureka” moment, so to speak, came when I was playing Alien Isolation. I loved the game and I was so fascinated and inspired that after I finished I said to myself, “How cool would it be to make a game where I could explore all these areas without having this alien hunting me, or these androids going after me?” This tied into the realization that I wanted to create something meaningful that my daughter could play a few years down the road and be proud of her dad. I didn’t want to be the guy who made a zombie game, I want to be the dad that made a game she could get something out of. Something with substance that touched upon some of the things that are important to me as a person while at the same time it being a fun experience.

So I started prototyping a bunch of gameplay elements and started puzzling these elements together while a story started to shape inside my head and I started to create a whole backstory and a main story.

T24: STARDROP is described as a “narrative driven, sci-fi action adventure” and being “semi-open ended world” – will there be a story arc to the game that you can play through to completion? If so, can you tell us a little about it?

JV: Yes, there will be an entire story arc in the finished game. I already have it all laid out and I am incredibly excited about telling it. I can’t say too much about it because the conclusion of it is something when done right, should evoke some heartfelt feelings and hopefully make you grateful to be with the ones you care for. But that’s something I am working towards, most of the game will be light hearted and fun and that’s what I will be aiming for with a few heavier parts and then near the end things will get serious. That’s all I will say about that. T24: So far in the demo – which absolutely hooked me by the way – we have seen the characters Aryn Vance and John Kindley – are there any plans for further crew members to be added as development rolls along?

JV: No further crew members are planned as there’s no need for it. I do have more characters planned at some point but also not wanting to go into that for the sake of spoiling the story.

T24: The game is already very visually pleasing, are you finding that you can do everything you want to with the Unreal Engine 4?

JV: Yes and no. Yes – I can do anything with UE4 but I am still restricted to the assets available to me. I do have two artists working with me, but they are doing it more on a freelance basis, so some of the funds will go into purchasing more asset packs. However we will also create some important set pieces and also some specific assets to create more personalized models. Something that’s personal to Aryn for instance and things like that.

I also don’t know everything that’s possible with the engine, I may know of it but that doesn’t mean I know how to do it. I am not a programmer but thanks to UE4 I can utilize the blueprint system and am able to do much more then I ever thought possible.

T24: Have you taken any inspiration from other games or films for this?

JV: I would be lying if I said no, I haven’t taken any inspiration. I’m 35 years old so I have played a whole lot of games in my time and I take inspiration from all across my experiences up until now. The Metal Gear Solid series and the Half-Life series have been huge inspirations as well as Alien Isolation as I mentioned. Then there are the Portal series which had brilliant writing. Mass Effect, Resident Evil, Life is Strange and so many more. On top of that I love movies and Gravity was another big inspiration.

T24: You have had a couple of live streams already whilst developing the game, are there any plans for further live streams or other media beyond the trailer? JV: I’m planning to do at least one stream this weekend, could be two and we’re thinking of changing to a Podcast in the future so that the community can keep up to date and we can share more insights into the game’s development or whatever it is we could talk about.

T24: Is there anything you’d like to say to anybody contemplating donating to this project?

JV: There are so many things that could keep someone from pledging but to me it’s fairly simple. If the demo doesn’t get you hooked or interested, as much as I believe in the story that will unfold I would rather have a backer that is convinced by the demo and feels passionate about what we’re doing then backing and still be on the fence. I’ve yet to fail any projects I have worked on and this project is the most dearest to me that I have ever worked on so this won’t happen. That said, if you back the project you are backing my future. This is not a one off project this is an investment into my personal future and career. To be able to do what I do best and at the same time be able to provide for my family and the team I’m working with. It’s as much their future I’m concerned about as it is my own. Any pledges go towards that goal and for me to be able to create one heck of an experience and being able to further grow as a developer and be able to make other inspired projects once this one is completed.

T24: Thank you for your time, I understand that you’re very busy and appreciate you taking the time out to answer some of my questions!

JV: Thank you for having me do this interview.

Have you played the STARDROP Demo? Have you donated towards it? Does this look and sound like a game you would want to play? We’d love to see what you’re thinking in the comments or in our forums!