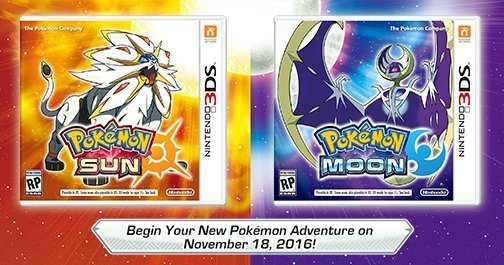 Early yesterday morning, the Official Pokemon Company’s Japan Twitter account gave us an announcement of when we will be getting some more info on Pokemon Sun/Moon. That will be Thursday, June 2nd. Not much more was given in the tweet, which you can read here.

So far we already know the name of the region, names and types of the starters, release date, and have seen the legendary Pokemon. That is thanks to the trailer that released earlier this month. We also know we can transfer our old Pokemon from X/Y – Omega Ruby/Alpha Sapphire and Red/Blue/Yellow/Green to use in Sun/Moon.

What would you like to see from this announcement? Let us know in the comments or in our forums. I personally want to see the names of the new Legendary Pokemon or what happens to the Red/Blue/Yellow/Green version of Pokemon in Sun/Moon, because back in Gen I those Pokemon had Special not Special Attack/Special Defense and didn’t have Abilities either.