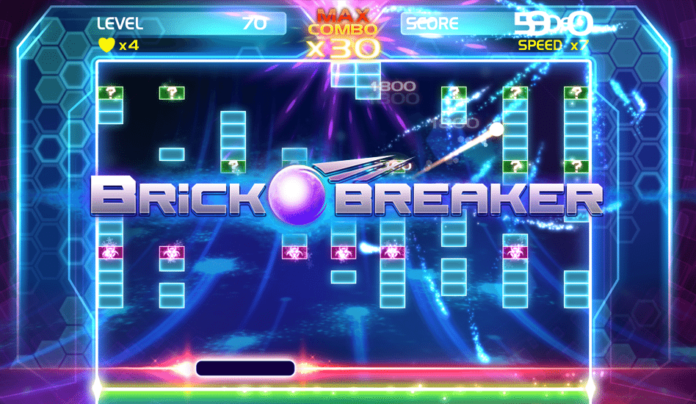 I’m too young to remember Atari’s arcade classic Breakout but over the years there have been countless clones and I have played quite a few of them. Even Brick Breaker’s developer, Sanuk Games admit they won’t win any points for originality, however this revamped classic already has a cult following.

Brick Breaker delivers a hardcore version of the old classic with a mixture of over sensitive controls and fast paced gameplay that should be fun but in reality is just brutal. The best way to gain a high score is to hit combos by hitting several bricks per shot. Beware though as more combos increase the speed of the ball rapidly making the gameplay insane and following the ball seriously tough, its mad but fun. Controlling the scrolling “bar” for lack of a better word is a simple task, move it left or right to bat the ball back towards the bricks in order to destroy them and clear the level. Easy you say? I thought so too, in-fact I believed it would be a breeze to help boost my gamerscore but to my frustration I couldn’t help but feel the bar was over sensitive, the slight touch to move it left and it leaps in that direction while the ball whizzes past and my life count goes down. No problem, just go into the settings and adjust the sensitivity like any game these days… nothing. I can’t decide if this is a deliberate omission to level the playing field for those gamers aiming for the dizzying heights at the top of the leader boards or if it has just been over looked completely. Eventually I found I got slightly more used to the sensitivity of the bar but its an issue that never entirely goes away. Difficulty is a real concern with Brick Breaker given there are only 2 single player game modes, Arcade and survival but no game difficulty selection. Arcade is the easier of the game modes as it provides 5 lives per level where as with survival the player begins the fight to survive with 5 lives but only gains more if they happen to get them from bonus blocks. Casual gamers will want to avoid survival mode as lives are precious but seem to decrease rather quickly. Survival is likely to leave the feeling of injustice and annoyance overwhelming the player so much that Brick Breaker will become just another number in their gaming library gathering dust. Arcade mode is where I spent the majority of my time as you progress through levels gaining 1-3 stars for completion and a score for the leaderboard. It’s fantastic to see a decent competitive leaderboard that breaks down the local scores (offline), favourites (friends scores) and global leaderboards (where my scores prop up everyone elses).

Aesthetically talking, Brick Breaker is dazzling. The vibrant neon lights, the explosions of bright lasers when hitting each brick and the dynamic colourful backgrounds are all truly stunning but more importantly are very, very distracting. It is very easy to lose sight of the ball amongst the chaos. If that’s not bad enough, on the rare occasion when you get an achievement the pop-up notification covers the majority of the bottom of the screen where you are attempting to scroll the bar to block the ball dropping into oblivion. Even achievements are a disappointment with the lack of imagination; Complete 10 levels in Arcade mode, Complete 20 levels in Arcade mode, Complete 30 levels in Arcade mode and so on. Along with the neon bright lights Brick Breaker has a funky techno sound track, it’s a rave in here and I’m nodding my head having a great time until I realise the same track is on repeat and that it is a familiar track at that. I fire up an other title from Sanuk Games (Tetraminos) and find that it’s the exact same song on repeat as well.