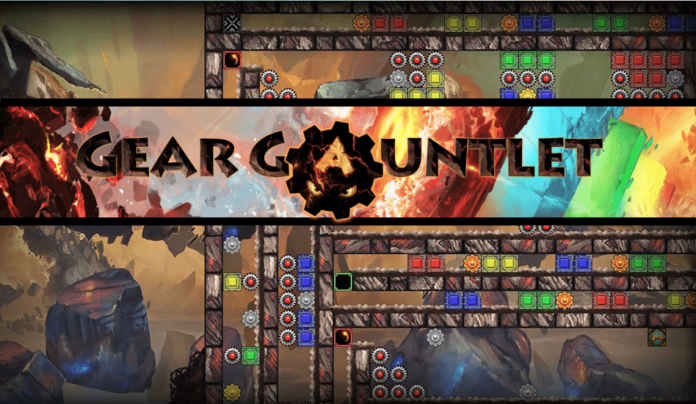 Gear Gauntlet from developer Drop Dead Interactive, is a real test for players reactions but more importantly it is a complete examination of the players patience and if and when they have a rage induced tantrum. This 2D action arcade game has a real retro feel to it with a simple but cruel gameplay that requires lightning reactions and good decision-making.

The aim of the game is in the title, the player controls a gear that must run the gauntlet while collecting bronze, silver and gold coloured cogs along the way for a higher score and survive until the end to move on to the next level. Navigate the gear through the gauntlet by selecting a path which is usually marked in difficulty by the colour of collectible cogs along the route (bronze being easiest, gold being hardest), break through walls by changing the gears colour in accordance to the colour of the wall, avoid crashing into stationary and moving buzz saws or prepare to start over from the beginning. All this sounds reasonably simple but add in the fact the screen is scrolling which the gear has to stay ahead of or you guessed it, start from scratch. There are also special blocks that change the way the screen is scrolling, teleportation blocks that take the player to a different area on the Gauntlet and keys for opening doors to other sections. Thankfully on the longer and tougher levels Drop Dead Interactive have added a checkpoint to save controllers and TV’s around the world being smashed in frustration. Most levels will take several attempts to even finish a single level, I took even more attempts on top of that to learn the level and attempt to gain a higher score. This brings me to the leader boards which add a huge amount of replay-ability to the game as well as a score from ‘A-F’, ‘A’ being the best and ‘F’ being the worst. Safe to say I didn’t see many ‘A’ grades but I’m proud to say I scored some B’s and sit in the top 30 on some levels. Gear Gauntlet is an addictive game that will cause extreme anger but sailing through a level and getting colour combinations correct and avoiding being damaged along the way to then completing a level after having meltdown after meltdown can instantly switch that feeling to euphoria.

The real beauty behind Gear Gauntlet doesn’t just lie in the gameplay but in the alluring hand painted backgrounds and graphics. Each level in the Gauntlet is crafted out of individual blocks of stone, dirt, grass, ice, molten rock etc., that have the paint brush or hand drawn appearance making it apparent the love and care that has been put into the graphics.  Taking in the beauty of the game might result in being sent back to the beginning of the level but appreciating the efforts in Gear Gauntlets stunning visuals and scrolling backgrounds that look more like a painting is more than worth it.

Each level has its own unique sound. While the tracks are good it can be slightly repetitive but I wouldn’t dwell on that too much as I found my concentration being solely on completing levels or bettering my score and the sound track becomes pretty irrelevant at that point.