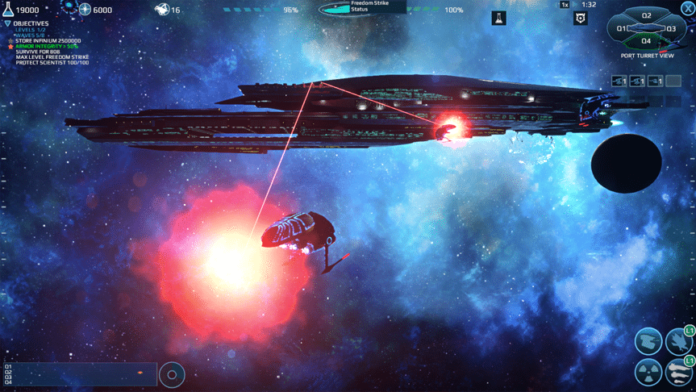 If you are a fan of spaceships and strategy games, I may have some awesome news for you.  Infinium Strike, the strategy action hybrid from Codex Worlds, previous members of Ubisoft, will come to PlayStation 4 in Q3 2016 in addition to the previously announced Xbox One release. The Kickstarter-funded PC version, published by 1C Company, will release on Steam for Windows, Mac and Linux on July 14, 2016.

So what is Infinium Strike?

Set hundreds of years in the future, humans are on the brink of extinction after decades of intergalactic colonization. The Wrog, a race of sentient alien ships, will stop at nothing until mankind is eradicated. All hope appeared lost until the discovery of a liquid metal known as Infinium. Harnessing the power of Infinium, humanity has built Freedom Strike, the strongest battlecarrier in the universe. As chief weapons officer of the Freedom Strike, it is up to the player to maintain the spaceship’s defenses as the Wrog attack from four sides. The player is given a wide selection of weapons systems to utilize on the four battlefronts, including:

Infinium Strike offers two game modes. In campaign mode, players advance through 10 missions in their quest to defeat the Wrog. Deep Space serves as an endless arcade mode in which players test their skills against endless waves of Wrog. Each player receives the same enemy attack patterns in Deep Space, allowing gamers to battle for the top spot on the leaderboards.