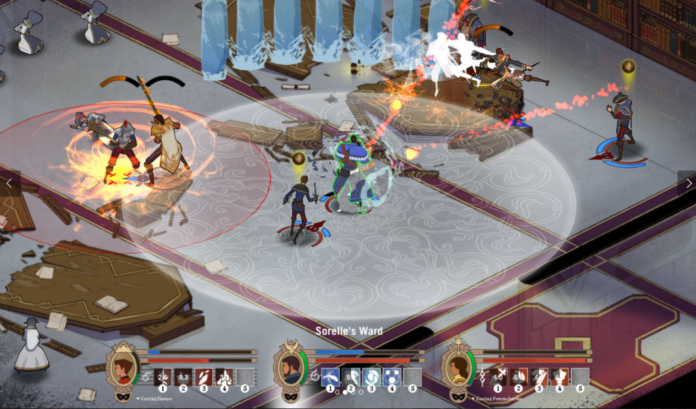 The co-founder of Irrational Games, Ken Levine, openly supported the kickstarter project for Masquerada: Songs And Shadows, back in 2012 on stage at the Spike TV’s 10th annual Video Recreation Awards. The reason for this is Masquerada pays homage to a lot of old school games the Levine grew up on and this title evoked emotion in him. The development studio behind the title is primarily based in an industrial property on the south of a Singaporean island, and they are creating something very unique that will be launching in the near future.

Masquerada: Songs and Shadows is a 2.5D isometric RPG, built in the vein of Baldur’s Gate and Dragon Age where you can pause combat to plan tactics for your party.

Set in the Venetian-inspired fantasy city of Ombre where rare masks are the key to casting magic, Masquerada is dressed in the colours and style of French comic books and vivid games like Bastion.

Players follow the Inspettore, Cicero Gavar as he returns from exile to solve a kidnapping that will shake up the foundations of the city.

Masquerada is intended for release on PC, Mac and consoles (TBC) in early 2016.

Whilst the release date for Masquerada: Songs and Shadows has still not been set in stone, the team are committed to releasing in the first half of 2016 so keep an eye out for this game on your dashboard soon.

“We’re more than an independent team of young game developers who live in Singapore. We’re a family that loves working on both riveting game designs and fantastic world building. Our simple hope is that you enjoy our labours of love. Share our games with the people you care about and you’ll really make our day!

In our games, we want players reading deep and getting all the feels. That takes immersive, believable worlds and a cast of characters with personable narratives. That stuff comes hand in hand with memorable gameplay mechanics that hit the spot, but still feel fresh. It’s difficult, but you know what? This is what we love.”