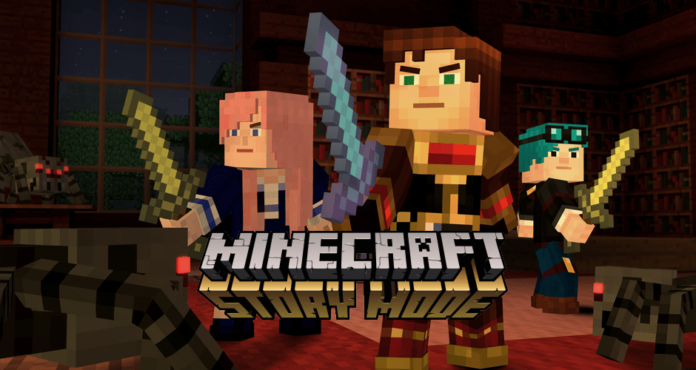 Telltale Games today revealed the first episode in an add-on series of three new adventures for Minecraft: Story Mode, Episode 6: ‘A Portal to Mystery’ will be available digitally worldwide starting Tuesday June 7th on PC, Xbox One, Xbox 360, PlayStation 4, PlayStation 3, iOS devices and Android-based devices.
Episode 6: ‘A Portal to Mystery’ is a continuation of Jesse and crew’s journey through the portal hallway in which they find themselves in another strange world over-run by zombies. The team receive an invitation to take refuge in a spooky mansion where a thrilling mystery arises alongside a cast of well-known members of the Minecraft community including Stampy Cat, Stacy Plays, DanTDM, LDShadowLady and CaptainSparklez.
Episode 6 can be purchased as part as the new Adventure pass for $14.99 which incudles Episodes 6,7 and 8 or purchase the episode indinvidually for $4.99. Players must own at least Episode 1 of the series or the season pass in order to purchase Episodes 6, 7 and 8.