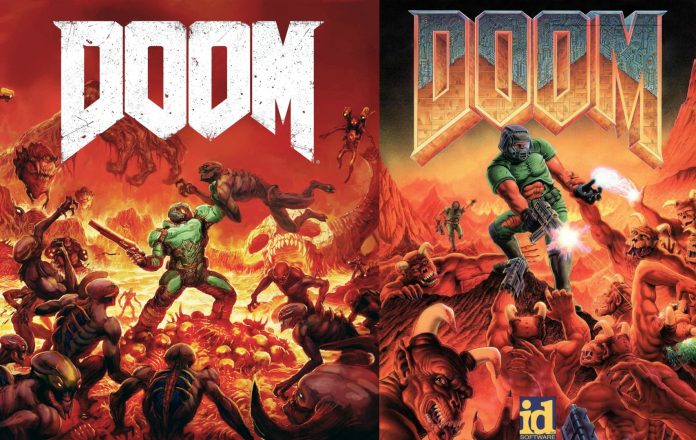 DOOM, it’s a game that many of us older gamers have had the honor of playing and something that the new generation of gamers haven’t experienced unless they’ve otherwise managed to get an old version of DOOM running in windowed mode on what’s considered an overpowered machine for the game.

First I’d like to say this summarized article is inspired by a YouTube clip by Gameranx about 10 DOOM facts that you probably didn’t know.

DOOM changed the gaming industry and helped develop it. Most first person shooters and various other games use the very same conventions that DOOM introduced to us back in 1993. Fact 10 – Wolfenstein and DOOM have a shared lore, for example in the Wolfenstein RPG which actually came out in 2008, the Nazi’s summon the harbinger of DOOM which in the game is sent back to hell by the games main character BJ Blazkowicz less it’s hand and leg, which is sawed off by Blazkowicz. As a result of sending the demon back to hell; the demon states that he will make all of Blazkowicz descendants pay for his actions, some of these descendants are ‘Commander Keen’ & the main protagonist of the original DOOM who is actually BJ Blazkowicz The Third. So in essence they’ve connected the lore of these three games: Wolfenstein, Commander Keen and DOOM.

Fact 9 – The artist who created the Iconic cover for DOOM, Don Ivan Punchatz, was given the option for a percentage of DOOM sales or a straight up fee for creating it. He opted for a straight up fee considering DOOM was being developed by the start-up, id Software. id Software were heavily involved in other games such as Quake and Wolfenstein 3D. The company is now owned by ZeniMax media.

Fact 8 – DOOM was so popular in 1995 that it was installed on more computers than Windows 95. It got Bill Gates so excited that he wanted to purchase id Software. DOOM made gaming so much more popular than the operating systems it used that Bill decided to do an oddball presentation with a DOOM background pledging to make gaming more streamlined on Windows 95 and future operating systems rather than on DOS known as the ‘Disk Operating System’ which was kind of a nightmare. Luckily most of you have never had the pleasure of experiencing the evil, evil, evil DOS system. For those that have, you know what I’m talking about. Microsoft had a team within Microsoft work with id Software to port the game to the  Windows 95 operating system, therefore increasing the popularity of the Microsoft brand. Apparently this project sowed the seeds for a lot of things including the birth of the Xbox. If this hadn’t happened Gabe Newell might not have gotten into gaming. He might not have recognized the organizational failures within Microsoft’s gaming division and consequently left to created Valve which has forever changed the landscape of gaming through its Steam platform. Fact 7 – For a while after DOOM‘s release most first person shooters were known as DOOM clones. The only exception to this though is Wolfenstein 3D which existed prior to DOOM and has been commonly said was the test bed for id Software in creating DOOM.

DOOM is the single biggest thing that has happened in PC Gaming in regards to games that were made for PC and the engines that were developed in creating future games.

Fact 5 – John Carmack the co-founder of id Software is also a rocket scientist, apparently a self taught one at that. He founded an aerospace company called Armadillo Aerospace which competed in the Lunar Lander NASA contest and won first place. The company is currently not operating though it isn’t closed down either.

Fact 3 – There is a custom DOOM map called nuts3.wad which is an arena filled with a sh*tload of monsters (12,263+ give or take) and the aim is to complete a series of secret areas and to beat the map you have to complete certain tasks involving the areas.

Fact 2 – DOOM online multiplayer operated on a TCP/IP port of 666. *giggles* get it, because it involves demons and well yeah… it’s an in-game joke between the programmers and developers. If you call it lame just remember this did happen in the early 90s.

Fact 1 – Most of, but not all of the guns in DOOM were actually modeled after toy guns found in Toys R Us i.e. the Nerf Gun, though it was given the gunmetal dingy ‘pew pew’ colors.

So there you have it. 10 uncommon facts that you might not have known about DOOM.