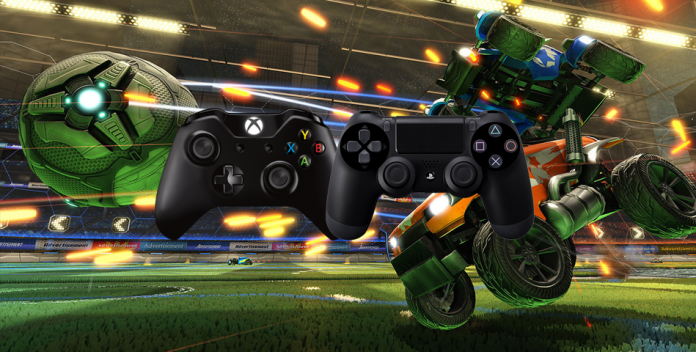 This week Jeremy Dunham, Vice President of Rocket League Developer, Psyonix revealed the potential reality when comes to cross-play between PC, Xbox One and PlayStation 4 during an interview about the companies year 2 plans.

When pressed on the matter of cross-play between Xbox One and PlayStation 4 Dunham said “We think it’s the right direction to move for the industry, but we also understand that there are so many political ramifications in making that happen as quickly as we would like.” Further to that Dunham added: “we’ve built Rocket League with the idea of having cross-network play as a ‘pie in the sky’ feature, and once we got it working with Xbox One and PC, we expanded on that. So now, all we need to do honestly, is flip a switch. It’s a virtual switch – not a big button or anything – but if it ever came to the point where we had permission to do cross-platform on all platforms immediately, we could have it up and running within a business day. It would be very, very quick. We’ve made the game in preparation for that eventuality, so that when it happens, people can come in and experience it immediately. Our engineers are really, really good, and they spent a long time making it, so now we’re just waiting and hoping for that opportunity.”

The question was never really is it possible to make cross-play between consoles work, the biggest questions were would Sony and/or Microsoft allow it, and is it a good idea?

At this moment in time it is still hypothetical but in my personal opinion the answer to is it a good idea, is a big fat YES. Cross-play between consoles has the potential to not only unify gamers but even possibly end an element of fanboyism.

My own history in gaming started with PlayStation but as gaming became more social I made the decision to switch from the platform I knew and preferred at the time for the platform my friends owned, an Xbox 360 in order to enjoy the games I liked with my friends. Introducing cross-play could eliminate that dilemma completely with the ability to choose whatever platform we prefer and play with friends who own a completely different platform. If it can be done then what are we waiting for?

Duplicate Gamertags, party chat problems across networks and as Jeremy Dunham mentioned “political” reasons, are all issues that could step in the way. Political reasons could range from several different things such as compromising security or boosting sales for a competitor. PlayStation 4 has out sold Xbox One substantially thus far in the life cycle of the current generation of consoles and if cross-play could potentially boost Xbox One sales then Sony might refuse, likewise if there was a chance Xbox One owners could switch to PlayStation 4 due to cross-play I believe the whole idea would never take off, not in the way I would love to see anyway.

If we are to ever see cross-play between consoles it is more probable it will only be limited to specific games minus any ability for party chat and that there will never be an open cross-play situation where we could all pick whatever platform we desired and play with friends online, solve international conflict, end famine and achieve world peace.

Michael (Director) – “I’m 100% for cross-play as it puts no constraints on gamers and their friends who want to play with them. Plus one single ecosystem for online games could manifest itself from this in the future which could make it easier for Dev’s to optimize games. Lastly I’m for cross-play because it would have the potential to qual some of the fan boy antics we see today (wouldn’t that be amazing!?) As you can see in my opinion, there’s nothing to lose and everything to gain with cross-play!”

Toolbox24 (Lead PC Writer) – “Personally I think this is great. The more inclusive and open games are the more people will get the chance to connect and play together. I am all for a “union” of Microsoft, Sony and the PC, and Rocket League cross-play could well be the first step to making this a reality. The only potential stumbling block could be username clashes, but it’s a tiny issue in the bigger scheme of things.”

Bella Ryse (Director and Editor in Chief) – “Cross-play in theory is an awesome concept, an idea where it no longer matters which piece of plastic you game on but rather what games you own. There is a reason, which is individual to each of us, that we game on the platform that we do and generally it ends up coming back to the social element, playing where your friends are. If this was no longer a consideration then the the focus would change to the hardware and services provided by said platforms in making our decision on which one we will game. Would this force the wizards behind the curtains to create more powerful consoles and offer better value for money with their services? Yes and no. We already know that both leading companies are developing new consoles and pushing out as much value as they can offer whilst still staying competitive with each other, so I don’t think removing that barrier would change this. What would compel you to buy one platform over the other if you no longer had to worry about not being able to play with your friends? The games. The games is what would keep you coming back, the console exclusives and monthly free offerings. By implementing cross-play across the board for Xbox One, PlayStation 4 and PC an entire shift of focus would be created from a business stand point and this is why I think we are a while away from seeing this broadly implemented. Would I like to see it? Yes. Do I think it’s necessary? No. We already have our friends lists populated on our preferred console/s so cross-play whilst is a great concept, isn’t a necessary one. I would however embrace it if it is made available in the future.”