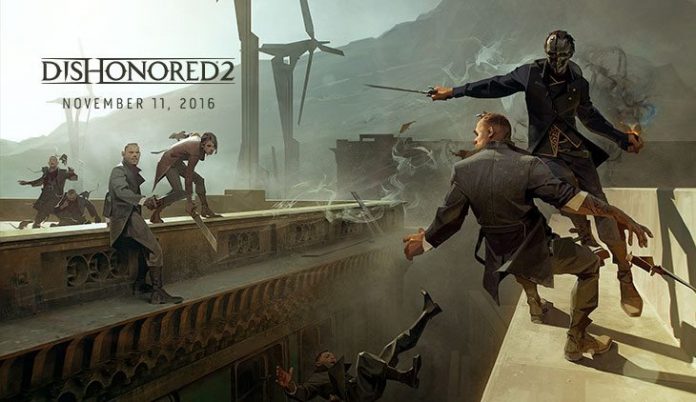 One of the main attractions of the Bethesda Press Conference was Dishonored 2, the game that was announced at last year’s E3, following the first game, which was a huge success and even recently got a definitive edition on current generation consoles.

First, a lengthy video explained the making of the second game in the franchise, stating that it was of the up most importance to have a world with regions fully realized, with each section having its own history, its own culture…frankly put, its own identity. Each part needed to be based on reality, where scenarios of action would be plausible, with a beautifully rendered background, where the world looks like a painting in motion.

One of the most important keywords to describe the game is choice: where each player can experience the missions at its own pace, stealthy or full-on actions, where an extra layer was added compared to the previous game: verticality, giving even more options to the player.

Afterwards, a background of the story was given, saying that we follow Emily, the girl saved from the first game, and the story happens 15 years later, when an attack happens at the anniversary of her mother’s death.

Gameplay demos were then unveiled, where the extent of the new engine was finally showcased. Some brutal close-combat stealth kills were shown, added to the tricks of Mother Nature. Weather instability can happen at any time during the game, influencing both the player’s options during a mission and the A.I. of the enemies.

A couple of the protagonist’s specials skills were also in display. They demonstrated “mesmerize”, which hypnotize enemies and allow Emily to pass next to enemies without them noticing. The “domino” skill was also seen, allowing to link an effect on an enemy to other ones in the same vicinity, which will become useful to clear a room and have a safe passageway. “Shadow walk” was also shown, allowing you to attack enemies full-on or stealthy like with the help of a dark smoke matter, not unfamiliar to those that played The Darkness. The ability to have glimpses into different timelines on a particular location was demonstrated too, which will become useful to solve puzzles and kill enemies.

Just before unveiling a new gameplay trailer, the release date for the game was confirmed: November 11th 2016, for PlayStation 4, Xbox One and PC.

Lastly but not the least, they’ve announced that a very limited collector edition of the game will be available, which will have at its centerpiece a replica of the mask worn by Corvo, one of the 2 playable characters of this game and the protagonist of the first one. They’ve also announced that for a limited time, all pre-orders of the game will include a free copy of the Dishonored Definitive Edition, allowing to experience everything the world has to offer.

That’s a lot of information about this game, which will be playable in only a couple of months. With all the information released, the possibility, the beautifully rendered living world and the intricacies of the gameplay, I can’t wait to go back to Dunwall.  Are you as anxious as me? Let us know in the comments.