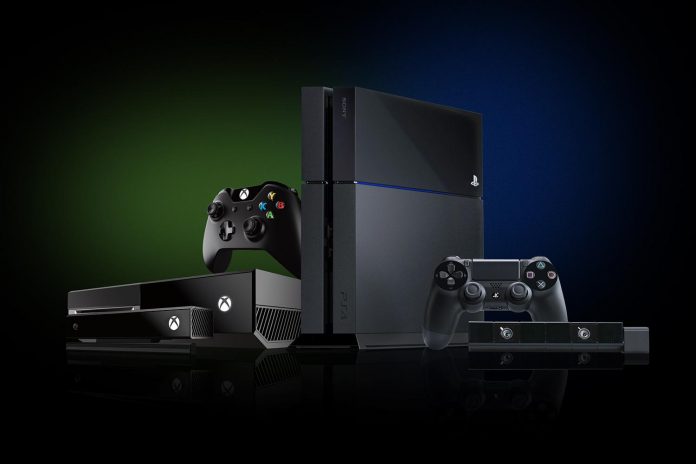 The first thing I can tell you is that the “war” is far from over and it most likely never will be. Until either Microsoft’s Xbox or Sony’s PlayStation are lying powerless on the floor next to the sun bleached exoskeleton of a SEGA Genesis.

Both Team Green and Team Blue are filled with endless amounts of passion for what they love… console gaming. So, with both companies looking to dazzle their respective fan bases E3 is a stage like no other in the gaming community. A place where fans and industry insiders alike gather to witness the showdown.

Microsoft chose Galen Center to showcase all things Xbox…  A modern space they filled with huge production value.  Massive screens, state of the art sound equipment and enough moving lights to make Lady GaGa’s last tour jealous. Sony, on the other hand, booked The Shrine. A classic theater complete with a live orchestra, a staple landmark in the city. The two choices are polar opposites. One is pop music, meant to dazzle and the other classical, raw artistry stripped down to its core to showcase what it really is. Gaming.

Microsoft chose to focus more on hardware. Leading off with its newest iteration of its current generation console the “Xbox One S”.  A “slim” version to simplify the name, which offers smaller packaging than it’s predecessor and a 2TB hard drive out of the box. One thing that stuck out was that it seemed to be lacking a port for the Kinect… but, after some digging I discovered that there will be a USB adapter that allows you to connect your Kinect. A not so subtle nod that the “game changing” Kinect is dead.

They also teased “Project Scorpio”.  A “current Gen” version of Xbox One slated for release in late 2017.  It will allow players to play current games in 1080p at 60fps, a benchmark that the current hardware has struggled to achieve. Microsoft also claims that it will have the capacity to touch 4K native once developers make titles for the platform.

This is bitter sweet… from a business standpoint I feel it sends mixed signals to the user. Imagine if Apple announced the iPhone7 then announced that the more powerful iPhone8 would be available a few months later… you see the problem?  Why would anyone care about the iPhone7, right? Current users would tough out the few months and wait for the 8. New users would more than likely do the same. Me personally…when I saw the “S” at the $299 price point I thought “cool I may finally buy an Xbox.”  Then I saw the “Scorpio” and went “Yup! I’m waiting for that.” If this becomes the viewpoint of the masses, which I feel it will, the “S” will be rendered irrelevant.  That said, pending price point and what Sony announces with the “NEO”, the “Scorpio” could potentially be a turning point for Microsoft, in a big way.

Though the hardware was a bit confusing for my business mind…Microsoft did display some pretty cool looking games, most of which are “Franchise” titles.  Meaning sequels to existing games. That said, the new IP Scalebound looks incredible. A modern age meets mid-evil times action adventure title. Unfortunately this wasn’t the first time I had seen it. I should also give honorable mention to Sea of Thieves, an Xbox One and Windows 10 exclusive that looks very promising though early in development. Beyond that the usual suspects were out in full force. Gears of War 4 hit hard on stage. Dead Rising 4 impressed long time fans and State of Decay 2 added to the post apocalyptic madness. Forza Horizon 3 showcased some of it’s new horse power.  All in all, Xbox players have a lot to look forward too.

Sony opened the show in a simpler, more dramatic fashion. A live orchestra playing a soundtrack as the lights went down and the first images of God of War danced up on the screen. The crowd went wild with excitement as we took in our first look at the re-boot. We see Kratos as a comparatively mild tempered father figure teaching a young man to hunt in a wilderness plagued by monstrous trolls. Though I am still up in the air about the now mild mannered anti-hero… I am SO excited to play this Norse-centric title and see where exactly the story goes.

Sony started on games and kept hitting hard with them. Showing crowd favorites like the above mentioned God of War, Gran Turismo Sport, a Crash Bandicoot remaster and Resident Evil 7. Though the crowd loved them, it was the new kids on the block that really got the crowd excited. Living legend Hideo Kojima showed up to debut his new IP, Death Stranding which stares Norman Reedus. A possible nod to the Silent Hill project that dissolved in the fallout of Kojima and his ex-employer?

Insomniac Games showed a take on Spider Man then revealed what appears to be a Zombie horde game titled Days Gone. Seriously…..do other games even Zombie, Bro? The last time I saw that many Zombies on the screen, Brad Pitt was trying to save the world.

Resident Evil 7 showed up… fully playable in VR and this was just what I can remember… It was GAMES! GAMES! GAMES!

Sony only took a brief break from software to talk about its upcoming VR release.  PlayStation VR will release on October 13th of this year with games like a fully playable Resident Evil 7, a Star Wars Battlefront X-Wing fighter mission, Call of Duty: Infinite Warfare VR Content and 50 titles slated for launch, not a bad start. Santa may be a buyer at the $399 price tag.

My head is still spinning from high rez graphics, whirling frame rates and a blizzard of information, so excuse me as I try to get my feet back on the ground. A lot of people have asked me “Who won”? Initially I said Sony, hands down. Sony won. I had this profound argument about how Sony showed more games, a bunch of which were new IP’s.  VR is coming this year which in my opinion bests a new version of the same console.  The crowd was more electric…and well Kojima was there… It’s kind of a trump card.

However now that I’m coming down from my gaming high I think I will answer the question differently. I’d say that though I prefer Sony. I say GAMERS Won. That’s right, you and me, and anyone who has ever put a controller in their hands. Anyone who immediately smiles when they power up their console no matter how bad their day was – we won.

We won because we have two amazing companies pushing each other to make the best content for us. So whatever console your on out there, happy Gaming. It’s going to be an incredible year.