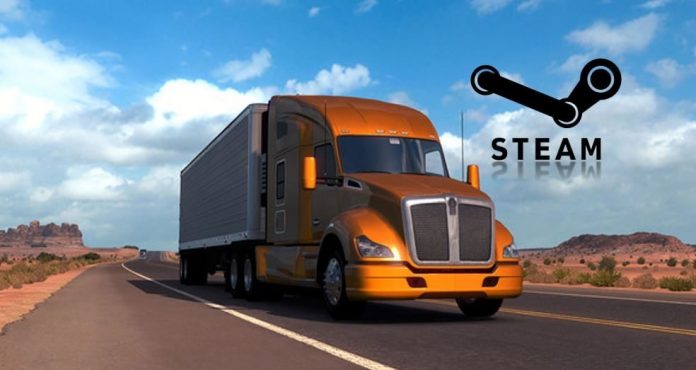 Happy month of June to everyone! Here are my top picks for this week’s Steam Special Offers. Be quick though, my article writing is a little late this week, so some of these games are only on special offer for a few more days.

As I so triumphantly exclaimed, I can get in my cab and take to the really open roads of America in American Truck Simulator, which has 20% off this week. Some of you may remember how I raved about Euro Truck Sim 2 a few weeks ago, so I going to rave about this one. It’s made by the same people, using the same engine, therefore it’s the sim I always wanted. You are free to drive around California, Nevada and Arizona, and are able to experience the sights that go with it. Seemingly endless and terrifying expanse of desert, the Pacific Highway, Vegas, it’s all for the taking, and I cannot wait. Trucks are customization to a truly American extent, as you can see: I can’t decide which one I prefer. There is also an added photo mode to show off your rig, and stylize pictures with blue skies up above, lens flare and palm trees. It’s a total dream come true, but we are all thinking the same thing, I’m sure. The first thing we’re all going to do is recreate Duel.

Next up is brand new release Sherlock Holmes: The Devil’s Daughter. You can pre-purchase this game for a 20% discount up until release day on the 10th. If previous titles are anything to go by, this one will be full of immersion and mystery. Add some creepy feels in there, and you’ve got yourself a great weekend. The art style looks glorious, and the voice acting should be on par with similar titles, and I’m hoping for more impact from your choices in this title. Get this at the offer price, and don’t go to work on Friday. I’m not condoning that, it’s just a prediction.

The biggest title on sale this week is Watch Dogs, which has 60% off the standard edition, and 70% off the complete collection. As the hype was so huge, and the expectation so much for Watch_Dogs, it had mixed reviews on release. Set to rival titles as big as Grand Theft Auto with elements of Splinter Cell and Hitman thrown in, it fell somewhat flat thanks to typical Ubisoft bugs, and the fact that it was a far more serious story. After updates to fix bugs, however, Watch_Dogs became a bit of a cult hit, with fans of the smooth gameplay and interesting concept popping up all over. It seems it was enough to green light a sequel, which we got a first glimpse of yesterday, and will get more on at E3 next week. This title is set in Chicago, which I must say looks stunning and very true to life. Though I’ve never actually been there…

My other recommendations this week are Mount Your Friends, which is half price. This title almost speaks for itself, but not in the immediate way you might think. Though there are some questionable physics which may cause offense. It’s more of a, shall we say, sports game?

Surgeon Simulator 2013 has 80% off this week, if you would like to finally try the popular game which has quickly become a classic, there are plenty of add-ons, including the anniversary edition in which you can “go inside Donald Drumpf”. It’s a topical special offer.

I Am Bread is a title I played at Rezzed gaming festival in 2015, which took the title of ‘most inventive’ and best looking booths of the weekend: It’s a physics game, but with a very distinctive and original theme. It’s frustrating and hilarious, and if you really want to scream profanities at the screen when the controls don’t quite do what you want them to, you can pick up both I Am Bread and Surgeon Sim 2013 for a discounted price together, and that has a third off the total price.

Finally, Retro City Rampage has 67% off this week, if you are into the indie trend of retro graphics, sharp and witty writing, and a cool and likeable anti-hero who seems as though he couldn’t care less about the amount of gore he leaves in his wake. I’m into it.

Until next time, you’ll find me in my truck, cruising the USA highways, and taking pictures from the Golden Gate Bridge.