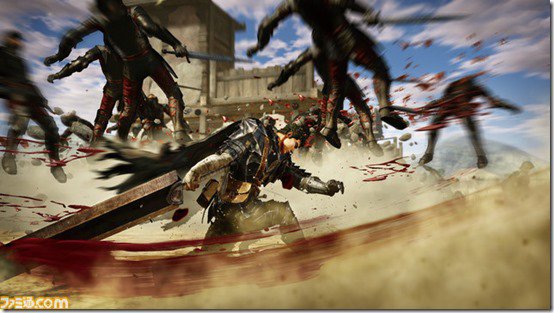 Berserk is a game based on an anime series of the same name. It was announced that it will launch in Japan on September 21st, 2016 but we recently received news that it will also be launching in the the US and Europe sometime this fall. There was a Berserk game once already for the Dreamcast called “Sword of the Berserk: Guts’ Rage”. The title is considered a hidden gem on the much appreciated but short lived Dreamcast console. While the game for Dreamcast focused on the “Hawk of the Millenium Arc”, information from the game’s newly launched english website state it will start from the beginning. The player will be able to play as Guts during the “Golden Age Arc” as well as his revenge in the “Hawk of the Millenium Arc”. Here is an excerpt from the english website:

In this work, the action of cutting through hundreds of enemies, fundamental to the Warriors series, is fused together with the dark and gruesome atmosphere of the world of “Berserk“, making various heretofore unseen acts possible, such as using a giant man-sized sword to cut enemies in half, as well as smash or send them flying with the “Cleaving” and “Smashing” attacks.

Revel in the astounding destructive power capable of cutting through multiple enemies with one blow!

In this game, in addition to the well-known and popular “Golden Age Arc”, you will also be able to join Guts and his newest companions on his journey of revenge through “The Hawk of the Millennium Arc”.

Additionally, the extensive story includes an impressive amount of artwork, including footage from the actual animation movie trilogy and new, original scenes portraying more detailed interactions between the members of the Band of the Hawk and other characters.

In addition to the main hero of the story, Guts, you can choose to play as any of a number of characters from all the different parts of the story. Every one of these characters possesses a distinctive set of skills and characteristics to ensure the variety of gameplay is consistent with the world of “Berserk“.

Furthermore, to deepen immersion into the story, the same familiar cast of voice actors from the movie trilogy and the new animation series were invited to take part in this project.

This story is set in a time of chaos, in a land where the Midland Kingdom and the Chuder Empire have been locked in a widespread war for over one hundred years.

During one battle, a lone mercenary, Guts, attracts the attention of the mercenaries of the Band of the Hawk, and is ambushed by some of them on the road.

After losing in a duel to the leader of the Hawks, Griffith, Guts is forced to join their band, where he acquires many new comrades, including a woman named Casca, a Unit Commander in the band.

With Guts fighting as the Raiders Captain, the Band of the Hawk continues to come off victorious in all of their battles, and finally earns recognition from the King of Midland himself.

Fighting now under the Midland banner, the Band raids a castle occupied by a legendary swordsman and rumored immortal named Nosferatu Zodd. Zodd defeats both Guts and Griffith, but in the last moment he notices the Crimson Behelit that Griffith wears around his neck, and leaves without killing them.

The Band of the Hawk continues to gain fame on the battlefield, and in the end, using only 5000 men fighting with their backs to the river, manages to capture the impregnable Fortress of Doldrey. This victory brings the end to the war between Midland and Chuder.

Though Guts is praised as a hero, he chooses to leave the Band. He believes that only in doing so will he become worthy of being a friend to Griffith. The shock of Guts’ leaving forces Griffith’s hand, and he spends the night in the Princess’s chambers. As a result, the King of Midland, furious, throws Griffith in the dungeon and gives orders to hunt down the Band of the Hawk as traitors of the state.

A year later, Guts, having learned of the troubles of the Band of the Hawk, rushes back to help the outlawed remnants of the Hawks rescue Griffith. However, they are too late. All the torture had left Griffith in a condition that allows for no hope of recovery. And it is this despair that activates the Crimson Behelit…

To fulfil his own ambition, Griffith chooses to be reborn as “Femto”, one of the Five Angels…

and offers in exchange the lives of his devoted comrades and followers, the lives of the entire Band of the Hawk…

The Band of the Hawk, sacrificed for the sake of Griffith ambition, is slaughtered by the monsters called Apostles, with only two of those present there left alive – Guts who has lost his left arm and right eye, and Casca who suffered a mental breakdown and became as helpless as a child.

In order to avenge his companions, Guts decides to wage a war against all of the Apostles and Griffith. He sets out on a solitary road of revenge, dressed in black armor with a giant sword Dragon Slayer on his back…

The leader of the Band of the Hawk, a band of mercenaries feared as the Grim Reapers of the Battlefield. He is a young man of striking handsomeness and possesses a charisma that enchants people around him. His dream is to acquire his own kingdom.”

Berserk will be released on the PS4, PS Vita, and PC. If you enjoy anime than this is a game you will want to be on the look out for.

What are your thoughts on the upcoming Berserk game? Have you watched or read the series? Leave a comment below or in the RGM Forums.