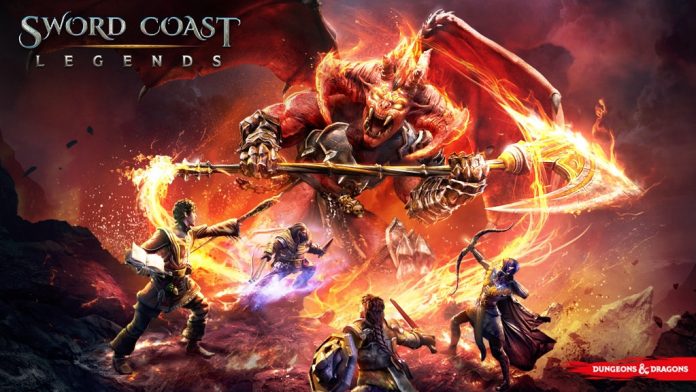 Great games often have a special quality that can’t be easily quantified, but is apparent to all that experience them.  Many developers strive to attain this mystery ingredient in the recipe for gaming greatness but few ever achieve it.  Commonly described as being greater than the sum of their parts, these games go on to achieve cult status and are enjoyed by players for years, sometimes even decades, after they are first published.

Sword Coast Legends has most of the parts but struggles to integrate them into a seamless whole.  Based on the fanatically popular pen-and-paper RPG, Dungeons and Dragons, it attempts to emulate some of the classic isometric titles from the past like Baldur’s Gate and the legendary Planescape: Torment.  In some regards, it certainly succeeds. Unfortunately, the fact that it is set in such a rich fantasy world like the Forgotten Realms ends up hindering its success in the end.  Sword Coast Legends lacks some of the things that made those old games great: a fresh, innovative story and unique, enduring characterization.  Who could forget kooky Minsc and his hamster, Boo from Baldur’s Gate? Memorable stuff!

While I enjoyed the overall story about a guild searching for a foe that is looking to wipe them out, I can’t help but feel like Sword Coast Legends squanders an opportunity to really take advantage of the lore and history that the Forgotten Realms provides.  Narrative gripes aside, the game does tick some of the other boxes when it comes to bringing the D&D license to a digital platform with many of the usual suspects present.  Elves, dwarves, goblins, fireballs and more oozes than you can poke a Broadsword +1 at!!  The character creation process is quite robust allowing you to cycle through a wide range of races and backgrounds as well as many cosmetic options to make your character stand out among the crowd.  While D&D aficionados will likely lament the exclusion of some of the more interesting character classes, such as monks and druids, the choices on offer are varied and fun to play for a while.

Sword Coast Legends is a bit of a mixed bag from a graphical standpoint.  Exterior environments are consistently impressive with some gorgeous vistas and weather effects on display.  In contrast, interiors are almost uniformly ugly and boring.  Nearly 20 hours in, dungeons and keeps all became a brown-grey blur of sameness and for a game based on dungeoneering, that’s not great.  Musically, it’s an entirely different story.  Sweeping, orchestral melodies accompany many of the game’s most important moments and the music appropriately increases tempo when the fighting starts.  I never felt the need to mute certain music or sounds.

Gameplay revolves around controlling a party of four and enables you to pause the proceedings when fighting begins in order to assign each character a certain spell or action. There is also an option for four player co-op and a Dungeon Master mode that, in theory, allows you to create your own adventures for others to enjoy.  Initially, I had a lot of fun trying out the different skills of each class and annihilating foes with lightning bolts and poison arrows.  However, after hundreds of battles, I found myself relying on two or three abilities and then just waiting for cooldowns to expire before starting over.  It became repetitive and boring pretty fast.  The skill trees are quite shallow with many upgrades being newer versions of the same skill but with higher damage or an elemental effect.  The DM mode is an exciting concept on paper but in practice, only offers players bare bones options when constructing their own scenarios.  Due to this basic approach, all the player made content looks almost identical.  This could have been an excellent feature enabling gamers to have that authentic D&D experience.

Sword Coast Legends was released on PC in November 2015 and received a fairly icy reception from critics and players alike.  The developer, N-Space, was shut down in March of this year leaving many to speculate about the fate of the console versions.  For better or worse, the publishers decided to launch the game on console with the only addition being the Rage of Demons DLC campaign.  Although this suffers from the same deficiencies as the main game, it introduces legendary character, Drizzt Do’Urden, and allows players to explore the fabled Underdark region.

On the whole, the game is a passably fun dungeon romp through a fairly generic D&D fantasy setting with a handful of beautiful visuals to appreciate mixed into the drab caves and keeps.  It’s let down by some weak characters, dull combat, and it’s inability to fully realize the potential of the legacy it is based upon.  In the end, Sword Coast Legends, set in the beloved Forgotten Realms turns out to be all but forgettable.