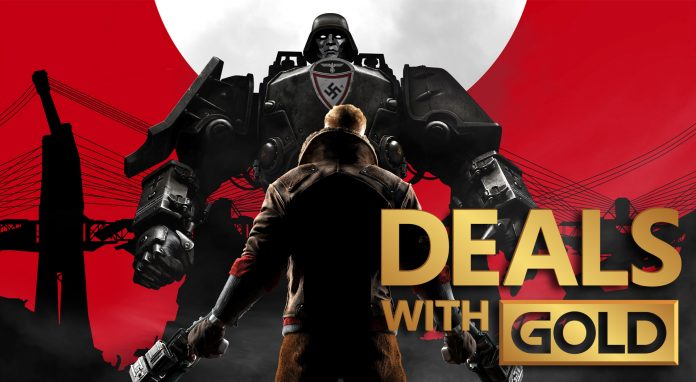 Major Nelson has revealed this week’s Deals with Gold and Spotlight Sale titles for the week of August 2nd, bringing some pretty deep discounts on both Xbox One and Xbox 360.

This is a great week indeed for Xbox Live Gold Subscribers as they can save up to 75% off on some of the best and most popular games on both Xbox platforms. There are some absolute great deals on titles like Fallout 4, DOOM which are both 50% off and absolute steals for $30 each.

This week’s RGM recommendation is Wolfenstein: The New Order which is available for 75% and its stand alone DLC Wolfenstein: The Old Blood which has been discounted by 50%. I can’t stress enough how good both of these games are and at these prices they should definitely be in you collection!

Europe, 1960. The tide of World War II has been turned using a new kind of mysterious, advanced technology. Using unrelenting force and intimidation, a ruthless world power has brought even the most powerful of nations to their knees. The regime now dominates the globe with an iron fist. You are the only man capable of rewriting history. In Wolfenstein: The New Order, assume the role of super soldier B.J. Blazkowicz as he uses elite combat tactics and an arsenal of uber advanced weaponry to take down the most powerful empire the world has ever known. Join forces with a band of dedicated resistance fighters and launch an offensive battle that spans the globe and beyond, as you seek to uncover the truth behind how this regime conquered the world so quickly. Take on massive mechs, super soldiers, and an army of seemingly unstoppable might as you fight to free the planet from a nightmare of unimaginable tyranny.

Wolfenstein: The Old Blood is a standalone prequel to the critically acclaimed first-person action-adventure shooter, Wolfenstein: The New Order. The adventure, which spans eight chapters and two interconnected stories, features the hallmarks of MachineGames – thrilling action, immersive story and intense first-person combat. As war hero B.J. Blazkowicz, arm yourself with new weapons such as the bolt-action rifle and grenade-launching Kampfpistole as you attempt to thwart the advancing Nazi war machine, and take advantage of duel-wielding pipes that can be used for wall climbing – or for vicious take-downs of never-before-seen Nazi adversaries.