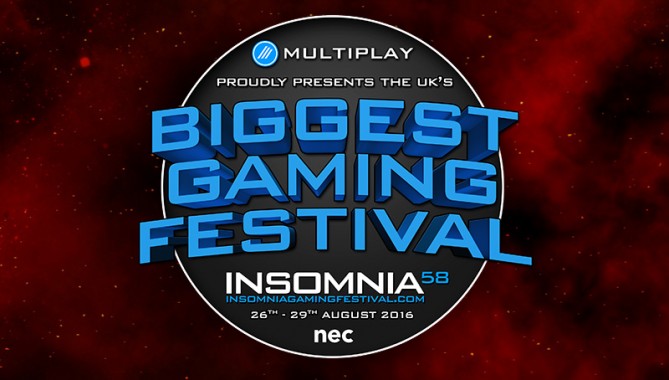 So, as you may have read in my Steam Sales articles of past weeks, I have been very excited about attending Insomnia 58 Gaming Festival as a volunteer, and now that it has passed and is gone, I feel I should tell you what it’s like.

Insomnia takes the title of biggest gaming festival in the UK, thanks to ever-expanding features such as the Twitch stage, League Fest and the pub quiz. EGX is cool, but it lacks the sense of community I felt at i58.

I signed up to be a volunteer, as I have worked at various music festivals in the past, but never a gaming one. It’s something I always loved doing. I figured it would be similar, and far less muddy, so I’d surely enjoy it even more. Plus, it means you get to spend the whole weekend there, early and privilege access to the whole site, free food and free accommodation, all for a few hours work. It’s definitely something I’d recommend doing, especially if you are under 30. Over 30 year-olds are more than welcome, of course, but be prepared to work with people who are at least 10 years younger than you. I myself am 29 years of age, but have the mentality of a 22 year-old. I fit right in.

The Birmingham NEC is a huge complex of convention halls and venues, food outlets, hotels and even an airport. It’s all extortionately overpriced, and of mediocre quality, but it’s the perfect place for things like this. The main exhibition hall housed special guests, hardware companies like Razer, Overclockers and Corsair, the infamous GAME Galleon, Xbox and Playstation, and gaming related outlets like Gametee and Merchandise Monkey.

New games on the expo floor included FIFA 17, MAFIA III and PlayStation VR. I didn’t get a chance to play, but from what I could see, PlayStation VR looks like a real, viable alternative for the gamer with a tighter budget, and FIFA 17 plays like a dream.

At one corner of the hall, the Expo Stage had been set up, offering a platform for punters to sit and enjoy special guests playing together, Q&A sessions, and Cosplay events. The Gang Beasts devs were around all weekend, so loads of competitive games were played, and it’s still a favourite game of mine.

Through the other end of the hall and into the next, the Main Stage offered even more play between YouTube and Twitch stars, such as Syndicate, Netty Plays, Yogscast and Mini Ladd as well as many others. The Main Stage was also the setting for the Insomnia Pub Quiz, which is the biggest pub quiz in the UK. I believe the final count was around 2,000 people in 250 teams. It was utterly insane. Everyone was there for the same reason; to have fun with friends, drink if they wanted to, and sing really badly. Words can’t do it justice, so if you are able to find pictures and the odd cheeky video, I recommend you take a look for yourself.

Further up the atrium was the heart of Insomnia. This is where it began. Bring Your Own Computer tickets were sold, allowing for people to either bring their PCs and consoles, or rent for the weekend. These players plug-in and play, and they don’t stop. Hence the name of the festival. It started as a LAN get together, and has expanded each time.

Monster was a big sponsor this time, and they set up in the BYOC hall, dishing out energy drinks for those who started flagging. The BYOC ticket gets you Monster energy drinks, the ability to place food orders which are brought to you, and early access to the Expo hall. Word of warning however, DO NOT disturb players, and be prepared for some smells.

League Fest was held here for the first time, and it made for some really interesting encounters. I don’t know what it was – especially as I have never even seen LoL really before, – but you could always tell who got a League Fest ticket. Streamers and other tournament players from around the world were there to play, meet and greet, and join in with the fun. Ticket holders could join in with the dedicated cosplay, tournament fighting and they all got a fun and funky goodie bag.

eSports was a big part of the festival too, there were many tournaments to get involved in, such as Hearthstone, Rocket League and Overwatch, all with cash prizes. It was super serious, and everyone had fantastic team t-shirts.

Personally, I worked at the Expo stage, making sure guests were safe from fans who might want to grab them for a picture or an autograph when they should be getting ready to go onstage.  I stood at the top of the steps leading up, to make sure cosplayers didn’t trip over their costumes as they walked out. No one did, they were all so professional. It was a big highlight actually, and drew a bigger crowd than any of the YouTubers!

The rest of the weekend was spent on queue control at the Yogscast booth. It was a great experience, chatting to members of the community/fandom/whatever, and listening to excited children telling me about their love for Martyn Littlewood, teens expressing how much they are looking forward to meeting Hat Films, and parents nodding at me when I said how lovely and sweet Hannah is. It helps to work somewhere like that when you know what you’re talking about. Some members of the public came up and asked me what the massive queue was for, and whether they should be joining it. I answered with more questions as to whether they knew who anyone is. Even if the answer was no, some joined the queue anyway. This confused the VIPs more than anything, which was rather amusing.

The plastic panels which made up the booth were rather fragile, and thanks to the fact it was literally in the middle of a gangway, next to a vape machine – which the kids loved (surely that should be illegal?) – and in front of the Robot Wars arena, there were three accidents over the course of the weekend. Here is a picture of me keeping the dignity: 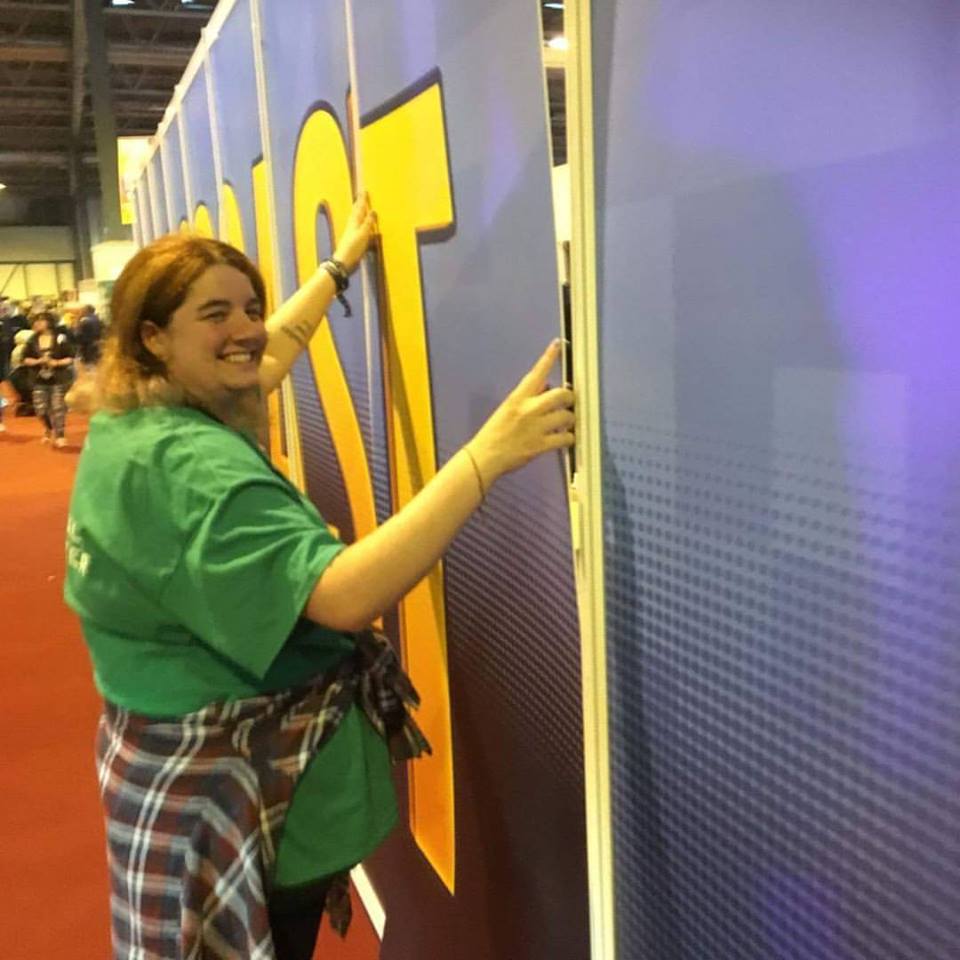 Apart from the fun things to see and do, I made a host of new friends, some of which will last for as long as I come back to the festival. I’d love to visit every time, but that depends on my schedule. However, it’s safe to say I’ll do it again. I can’t say enough about the people who work there, including the other volunteers, the stage and set up crews and the organisers, but they have all become friends, and are keen to welcome and look after anyone they meet. If you ever have the opportunity to visit, take it.