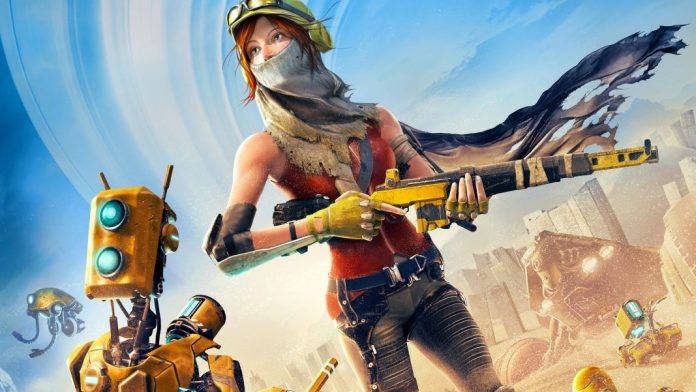 This past week I started playing ReCore which launched on September 13th in the US. When I buy a game that I know I want to play I do everything I can to avoid reading or hearing about reviews and metacritic scores. Unfortunately for me, it was hard to avoid hearing about the negative things that were said in the reviews for ReCore and gamers talking about a score. Despite what I heard I still bought the game because it’s the type of game that I know I would like as a gamer. I’m at the point where I know what genres I like and I don’t need someone else’s opinion to dictate what games I play. I’m happy I went with my gut as always and purchased this game.

ReCore is an Xbox One and PC game which was developed by people who worked on Metroid Prime and Megaman. That alone made me confident in my purchase since those are two of my favorite game series to date. I started the game and went in with an open mind ready to experience the game for myself.

You play as Joule who is aided by robotic companions. The first one you start out with is a robot dog named Mack. My initial impressions were good, I liked how Joule and Mack interacted, they both had distinct personalities. I also like that Joule is a strong female protagonist much like the rebooted Lara Croft in the recent Tomb Raider games. It’s good that the gaming industry is moving away from hyper sexualization and making female leads that are down to earth, strong and realistic to actual women in our society.

As soon as I started playing the game, I knew it was something I was going to like despite what reviews said. This is an old-school style of game and does remind me of the gameplay in Metroid Prime. You use the left trigger to lock onto an enemy and the right trigger to fire. This isn’t a shooter despite a gun being Joule’s main weapon. The lock on mechanic makes it so you can focus on jumping and dashing to avoid incoming fire. To me this was not a negative as I grew up with games that weren’t shooters. The games I grew up with were challenging platform games. The dash mechanic is very reminiscent of the dash in the Megaman games. It’s a straight dash forward, back, or side to side since the game is in 3D space. Double jumping is also available which is an old school staple in games.

ReCore is not an easy game, the difficulty is very much like a Megaman game. You will need all your available concentration and wits to complete the challenging jumping sections and the battles with the various different robots. Combat is kept fresh by using a color system for robots and your gun. An enemy robot that is red is weaker against red ammunition. There are four colors available for your gun they are red, yellow, blue and white. There is also a charge shot much like the charge shot in Megaman.

The combat at first may seem simplistic but it’s actually pretty deep. Enemy health bars are broken up into sections, breaking a section increases your combo and can stun the enemy. When the enemy is stunned they take more damage from charged shots and attacks from your robot companions. In addition to this you have the option to destroy the robots for parts or yank their core out for core resources. Both items are essential as parts and cores are used to upgrade your companions and craft stronger parts for them. It’s a balancing act but once you get used to the combat you’ll be yanking out cores and destroying robots on instinct instead of thought. It’s a very fluid system but it’s not explained in the game so you will have to experiment to understand the mechanics better.

One of the complaints I heard about the game is the load times. I would have to agree with this complaint as I found the load times to be rather long especially if you die in the overworld. In a dungeon it’s much faster but in the overworld I found myself checking twitter during the load times. Hopefully this can be fixed with a patch because both this and Deus Ex: Mankind Divided suffer from much longer load times than I expect in 2016. You will die in this game and not only is it frustrating to die it’s frustrating to know you have to wait through a loading screen. I can see this leading to many gamers rage quitting in annoyance.

Another issue with the game is the framerate. Generally the framerate is ok but there are certain dungeons and section where it stuttered pretty badly. While it didn’t affect how I played the game it was noticeable and something else that should be fixed via patch as soon as possible. This makes me think the game was a bit rushed to launch with some of the technical issues found throughout the game. One of the things I heard about was a falling through the floor glitch but I personally haven’t experienced this.

The visuals are good but they aren’t great. However, my expectations weren’t that high given the $40 price tag of the game. This is a AA game and should be treated as one, this is not a huge AAA franchise. It’s a new IP that Microsoft is obviously testing the market with it to see how gamers respond. While the visuals didn’t bother me or detract from the game experience one thing that did was the way you can only select two robot companions at a time. You will run into obstacles and puzzles that require a specific robot but you won’t have them available to you resulting in finding a fast travel station or traveling back to your base. This is worse than it seems due to the games load times. I may have overlooked this if the game didn’t have loading issues but since it does I simply can’t give it a pass. You should be able to switch out robots from the menu screen as it’s inconvenient for no reason in its current state.

ReCore is strictly aimed at a certain demographic, the gamers like me who grew up with platformers. ReCore is a lot of fun to me and I would recommend it to anyone who grew up gaming in the 80s or 90s. If you are a younger gamer I still think you should give it a shot given the discounted price but it may not necessarily be your cup of tea. A lot of the complaints I heard were from younger gamers while older gamers are seemingly enjoying what is to offer in ReCore.

This game is a perfect example of why you shouldn’t strictly go by review scores to dictate your gaming habits. While it has technical issues it is nowhere near a bad game. It’s very fun and the characters are very likeable. I’m hoping this game sells well enough for a big budget AAA sequel sometime in the future. I leave you with this, reviews are guidelines but if you are a gamer you know what genres you like and you should be comfortable experimenting with new games. Sometimes we get burned but in this case, ReCore is well worth the $40 price and offers great gameplay in a metroidvania style open world.

Review and impressions are from the Xbox One version of the game.