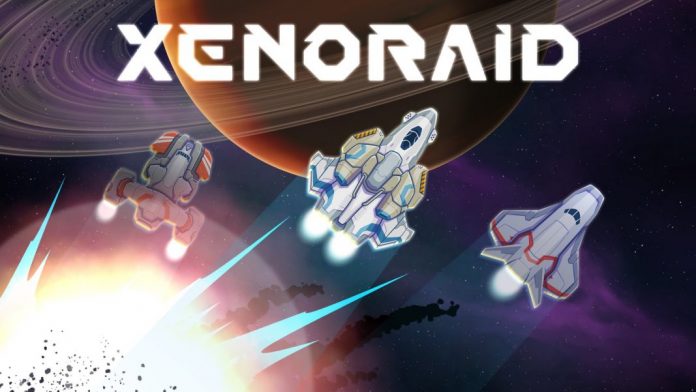 So just lately I’ve been playing a bit of the PC version of the game Xenoraid in order to review it just for you. Not him over there. Not that other person sat at the back. But you. Faithful RGM’er, how I love thee. Anyway, back to Xenoraid.

The initial hook that made me want to review it was the type of game it is. Now a couple of games that stick out for me when I was growing up was Major Stryker and Raptor. Top-down, vertical-scrolling games where you control a little spaceship or fighter jet taking down the bad guys. Great games that when I was a kid, I loved, I loved the simplicity of them, I loved the controls, the graphics – though very of their time now – I just loved everything about them.

So when I found out that I could review a top-down, vertical-scrolling game cut very much from the same cloth as those classic Apogee games, I was in. I was on. I was all over it and couldn’t wait to get stuck in.

That my friends is where my enthusiasm starts to tail off a little. Xenoraid at first glance, (and I literally mean first glance in the main menu), looks pretty good and even in the menu for the first set of missions. I took my time to get to grips with the layout and see the controls. Simple, up, down, left, right, mouse to fire and change ship. Or you could use a controller – I’ll get onto that in a bit though. OK good so far. Let’s delve into the weeds.

The main meat and bones of this game is not what I thought it would be, as I say, a from the old-school Apogee games in the same genre where there was always an interesting background, power-ups within the levels and a good feeling of immersion, Xenoraid falls short. Visually, the game is pretty smooth with background visuals that aren’t bad, but don’t ever look interesting – space and a planet repeat – the graphics aren’t horrible by any stretch of the imagination – they’re just dull. There’s nothing overly distinctive about the graphics within the game that I can share with you.

The sounds within the game are pretty good, very much like you’d expect from a game like this, but the music in the menus can bit a little grating – fortunately you’re not in them for very long! The sound effects used within the main game itself though are pretty good, but considering the lack of substance in Xenoraid, even using voice overs could have improved the game no end – when you’re playing, little text bubbles come up at the side of the screen, however since you’re focusing on what’s going on over the rest of the screen, you never really get a chance to read them making them not only pointless, but a bit of a distraction.

The way the game plays was alright with keyboard and mouse, but felt very clunky this way. I would personally recommend using a controller for this game – it is a completely different experience. Using the kb/m setup is very sluggish, responds slowly and is far too easy to make mistakes. Using a controller (I was using a wired Xbox 360 controller) and it turns the game on its head. The controls are smooth, very easy to grasp (but still required practice to master) and felt more rewarding.

However, the missions – despite introducing new enemies – get very stale after a short while. There’s not a great deal of surprise or requirements to change your gameplay style to adapt – and if there is you can just swap your ship for one of the other 3 you have and just use brute force tactics.

You can upgrade your individual ships in the Fighter Bay such improved weapons and repairs and you can also purchase upgrades in the Tech Lab that will apply to all ships in your squadron like the Blaze of Glory which will detonate a small nuke if one of your fighters are destroyed as well as other upgrades like additional armor or countermeasures.

The story of the game is that in the year 2032 (yes in 16 years) the human race is under attack by an unknown but small alien raiding fleet. Starfighters are “improvised” by arming existing spacecraft with various types of weaponry, both conventional and experimental and…you start the defence out by Jupiter and then work your way back towards Earth. That’s about all you need to know. To be honest, they try with their story but maybe not enough, with little interactions between characters that overlay the game menu that intersperse the missions, but they don’t really add much as they are not particularly engaging and the story doesn’t really pull you in very well. You’ll find yourself after reading through the first few missions worth of interactions that they become less and less relevant and that you just want to get on with the game itself.

Overall Xenoraid is fine to fill the occasional half hour slot you might have spare, but it’s the kind of game you should really wait for a sale to get, it’s graphics while not horrible are just a bit boring and the story and atmosphere of the game do not suck you in like a game should. Even at its full price of $10, I’d feel like I had paid a bit too much for it. But if you take one solitary thing from all of this – play with a controller instead of kb/m.

Xenoraid is out on Steam today (September 30th).