First off, watch this trailer:

Looks pretty fun right? I had to check it out on the name alone, and it’s probably what brought you to this article.

Ultimate Chicken Horse is a level building challenge based game where players have to race to the end, avoiding death from the many threats in the level. All characters die with one hit and you can help with that. The game becomes more villainous depending on how much of a villain you are. You can create or edit levels to be more difficult for your opponents, the risk being that it is more difficult for you too. But the rewards, oh so much sweeter. So basically a more brutal Super Mario Maker. 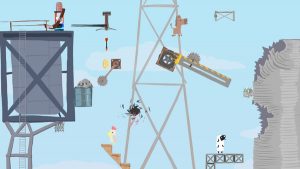 The online support for the game has been in ‘beta’ for a while, apparently, and today the developers posted on Reddit that the game is healthy and stable enough to leave the beta. A local version has been available for a while now. Why have I not seen this before!?!? This is of course, a big moment for any developer who are constantly supporting their game and who take pride in it. The three man team of Clever Endeavour, certainly seem to be.

The game is available on Steam right now. No word of a console release at the moment, but let’s hope so. As many people as possible need to experience fun like this.

So what do you guys think? Will you be giving it a go? It might make a good party game. Let us know in the comments section below or on the RGM Forums.