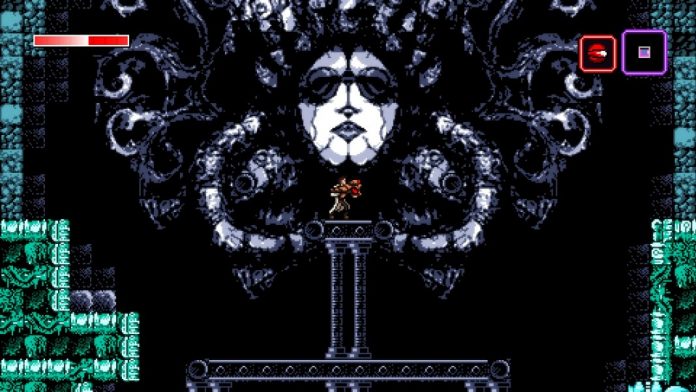 It’s all but impossible to review Axiom Verge without mentioning Metroid in some regard. As soon as I booted the game up and the main theme played with it’s grinding bass and echoing crescendos, I immediately thought of Nintendo’s classic action adventure from the halcyon days of the NES. Axiom Verge certainly wears it’s inspiration right out there on it’s sleeve and features most of the things that made Metroid so memorable. While the game is sometimes a little too overindulgent in it’s efforts to pay homage, it unquestionably rises above those roots and forges a path of it’s own, arguably better than the classics to which it has been compared. Don’t get me wrong, I really love the Metroid franchise. But Axiom Verge is it’s own marvelous beast and deserves to be judged as such.

Right, now that’s out of the way, I’ll attempt to keep any reference to the M-word to a minimum for the rest of the review. Axiom Verge casts players in the shoes of Trace, a scientist of some kind who gets transported to a strange planet after a major mishap in the lab causes a catastrophic accident. Waking up in a mysterious alien environment, you must guide him around an extensive map made up of several distinct regions. 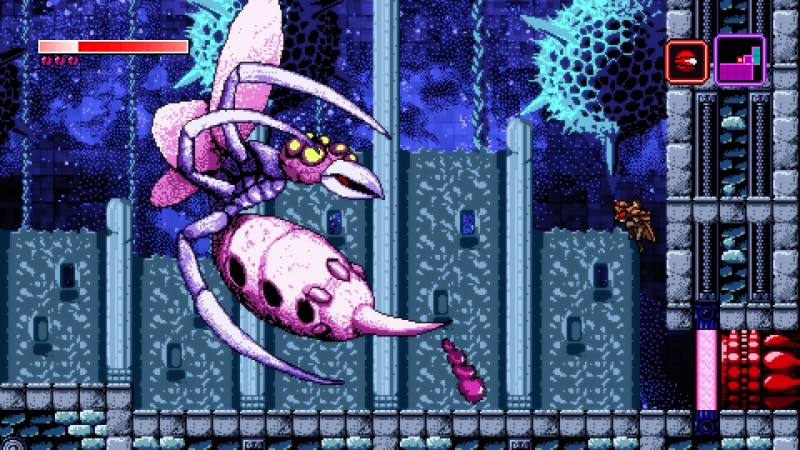 In a firm nod to genre tropes, the game “gates” off certain sections until the required upgrade or weapon is discovered. And I can tell you, some of those upgrades are well hidden and very tough to find so prepare for lots of backtracking and head scratching while you try to figure out how to reach that cliff that is just slightly out of reach or that door behind a wall you can’t seem to pass. This form of progression can be frustrating but Axiom Verge has paced it almost perfectly and although the solution often required some extra effort, I always came away satisfied with a flashy new gun or game changing ability. The toil versus payoff ratio is just right and that’s a big plus when many similar titles get this aspect really wrong.

Weapons and tools are meted out at an acceptable rate over the roughly 10 hours playtime. By the end of the game, Trace is hauling an array of weaponry vast enough to make him a valid candidate for the next Doom game! There’s some serious diversity among the guns as well but although I found each new one to be fun for a short while, I would usually switch back to my favorites when it really mattered. Unfortunately, once I scored the homing missile late in the game, that was my mainstay for the rest of the campaign.

You will also come across a variety of tools in your travels and unlike the weaponry, these are usually required to progress further through the environments. Included are a drill for breaking down those pesky bricks, a very dapper lab coat that lets you phase through walls (don’t ask me why a lab coat can do that) and a disruptor that enables you to “glitch” certain platforms and enemies. This glitch gun was particularly impressive as it affects some enemies in unique ways, sometimes changing them into a different form that may help you in a sticky situation. On one occasion, after being stumped about where to go next, I used this gun on some nearby baddies and they morphed into little explosives that blew up an obstruction clearing the way for me to move on. Very cool! 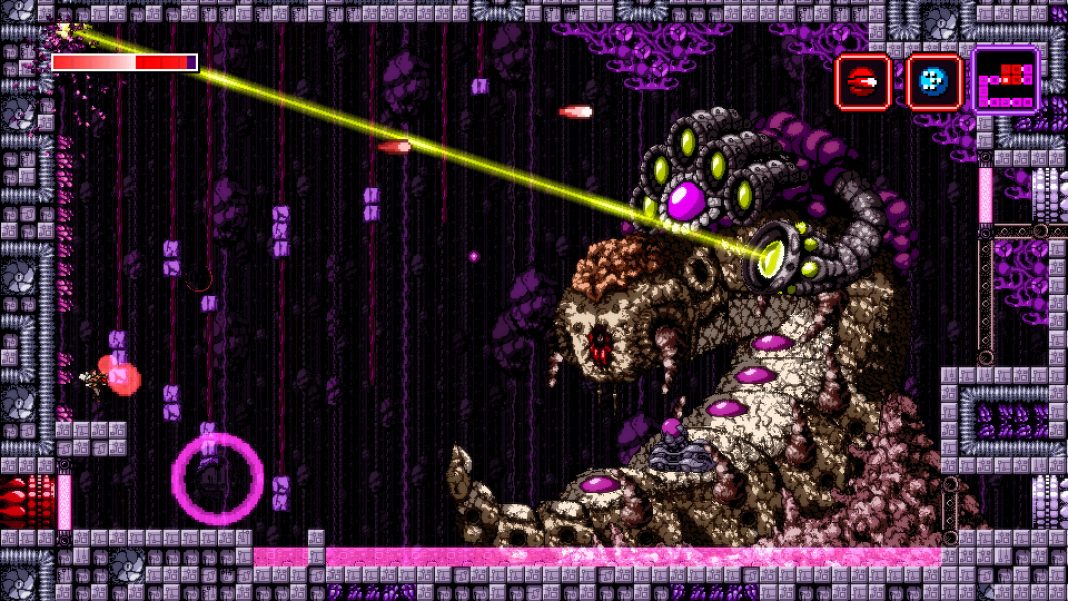 You’ll need to become adept at wielding your arsenal as you will be assailed on all sides by a plethora of antsy antagonists. There is an eclectic variety of fauna for you to engage with and unfortunately, they are all out to grind you into goo! The first section straight after the game begins is replete with small enemies trundling smoothly along the ground in a display that looks like it was torn cleanly out of Metroid (sorry). You’ll face many others, all of which are finely animated and strikingly drawn. Perhaps the biggest highlight in this regard are the bosses, some of which are so gargantuan, the screen neatly zooms out to fit them in. Each of these encounters is quite a grueling ordeal but again, the game deftly balances the difficulty so although I struggled initially, I always felt like I was making headway and improving my technique. As such, taking one of these big boys down was always a rush and very gratifying.

Graphically, Axiom Verge is a game that has a very particular aesthetic. This is no HD eye-candy-fest but it is not designed to be and the retro, pixel style visuals set a grimy, sci-fi tone that is admirably imagined and executed. The towering, bio-mechanical faces that many would have seen in trailers and such, are works of gritty beauty and an especially impressive sight to see. I don’t know if the developer is a fan but much of the art seems to have an techno-organic vibe to it, reminiscent of H.R. Giger’s designs for Alien.

Music is of an equally high standard with clanging industrial rhythms and thumping bass beats dominating the soundtrack. However, there are also quiet moments that allow you to appreciate the isolation and sparsity of the environments. The sound seems like an extension of the visuals only enhancing the atmosphere that the game portrays so well. Perhaps the most remarkable thing about Axiom Verge is that it was developed by one man. Sound, visuals, gameplay, everything, done by Mr. Thomas Happ all on his lonesome. Take a bow sir, nice work! 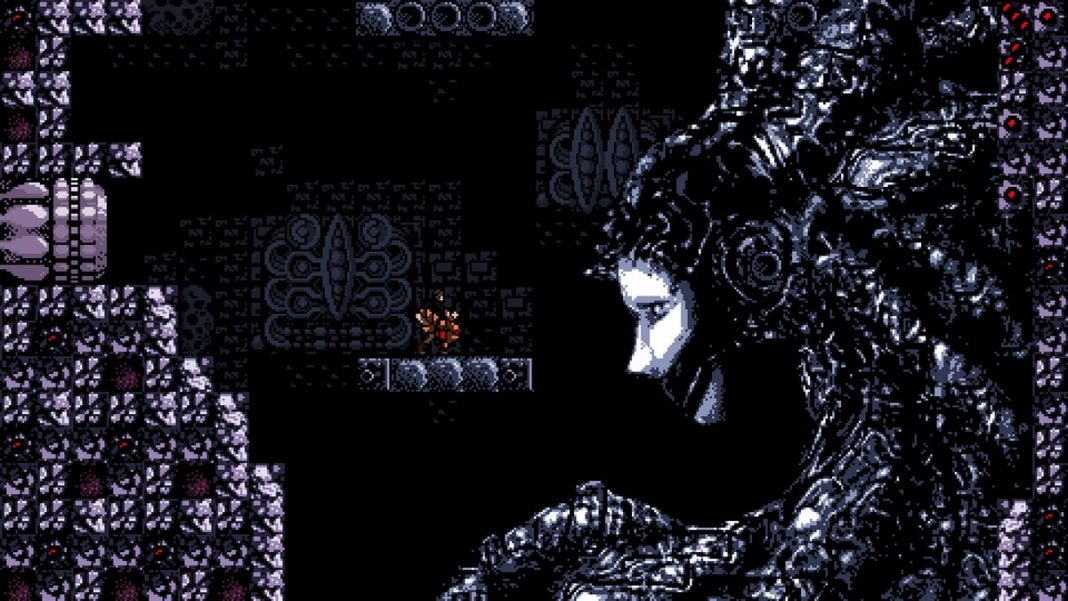 Every game has it’s flaws and Axiom Verge is no exception. With such a massive world to traverse, the map system in the game is poorly designed and just not very useful. Now, I’m all for games that don’t point to the next objective with a big red arrow but the lack of any guidance whatsoever is just as bad. It’s frustrating to wander around the same levels multiple times aimlessly searching for direction only to stumble upon the right path by blind luck. Perhaps a “map download” system like the one from Super Metroid would have been a better option.

Axiom Verge hits all the right notes when it comes to side scrolling action adventure. Tight controls, moody soundtrack and unique visuals all combine to create possibly the best in the genre since Super Metroid back in the day. It always feels like an original experience though, and that’s a testament to the developer who was able to retain many of the best Metroid ingredients while also instilling some of his own magic into the formula. A certain company could learn a lot from Axiom Verge about where to take a certain franchise in the future. That’s right Nintendo, I’m talking to you!