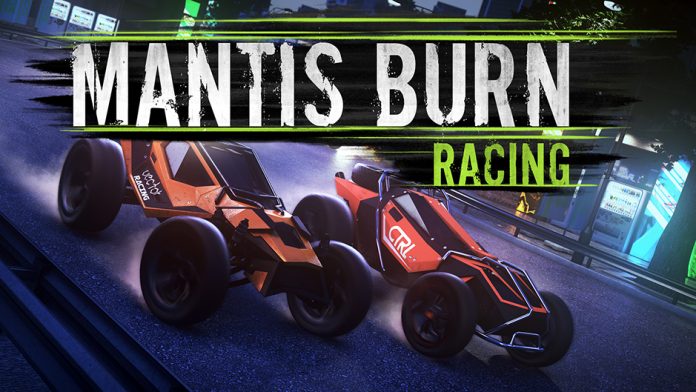 It’s easy to say that the current racing genre focuses mainly on maintaining authentic driving experiences through the first-person hyper-realistic. For all the Forza Motorsports and Drive Clubs out there, the gaming industry needs more Rocket Leagues that take pride in being more arcadey and more focused on the fun aspects. Mantis Burn Racing joins that Rocket League style of having some old school fun, and it’s a welcome (and entertaining) break from those other racers.

MBR is a top-down perspective competitive racing game from developer VooFoo Studios. The game’s focus is on 4-player local and 8-player online multiplayer, a 7-season-long single-player campaign that involves 8 different game modes, and a progression system that offers a steady leveling-up system with rewards of accessibility to new car models and new car mods.

MBR feels like it’d be right at home with an old PS1 or N64 game, and that’s no insult. With its simplistic design and focus on fun, the old school gameplay allows the races and activities to have great replayability, especially when playing with friends.

As soon as the game starts the player with the first initial car model, the Renegade, it’s up to you on how you wish to proceed from there.

Local multiplayer can be a simple way of trying out all the maps while playing with friends or even just the A.I if you want to get in some practice races. I was unable to get any friends to join in with me, so A.I. competitors was my only choice. However, it was still a pleasant experience learning the ropes, as this is where I developed my comfort level with the driving and controls (very easy controls to learn as well, thankfully) as I went through my first difficult races that had me coming in last place and second-to-last. The A.I. also presented a welcome challenge as they focused primarily on winning and didn’t really mess with my car.

Unfortunately, the best way I could describe my online experience on Xbox One would be “unresponsive.” This isn’t a design flaw, it’s more that I haven’t been able to find many lobbies to get potential racers all together. Hopefully more players start playing online as this is a game that begs to be played with others, and could use more of an active online community.

Since I was far more used to the typical third-person and first-person driving POV, the overhead view of the driving caught me off guard. It’s important to note that I went into the game completely blind, with no idea how it played or what gameplay looked like, so it was only natural that I had some not-so-flattering initial races. However, after a good amount of practice and the right camera selection (I chose dynamic, but there are others like standard, tight, and static that can cater to players’ personal preferences). 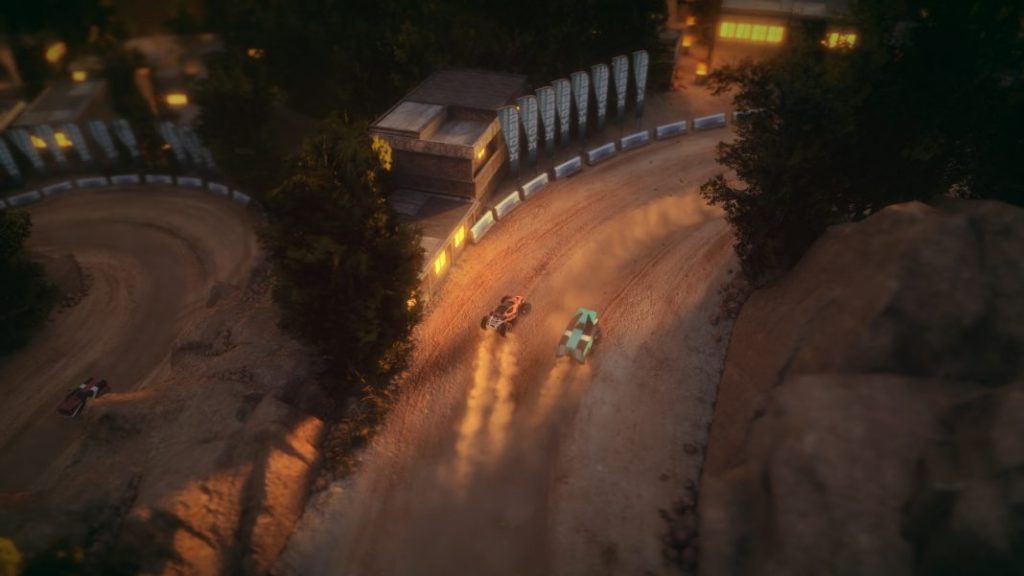 When it comes to gameplay, the experience is fun, smooth-flowing, and engaging throughout every race. Each battle is strategic, with a properly-timed boost or held grind around a tight corner could lead to you either ruining your chance at the top, or ensuring your place on top of the pack. There are many different forms of races, like:

On the negative side though, the racing DOES get repetitive after a streak of races, as they ultimately start to feel too similar in regards to how the A.I race and the overall purposes of each race type being similar in regards to how they’re structured. The different race types, like Hot Lap or Knockout, aren’t presented any differently or have any unique quirk about them that sets them apart from the standard race.

There isn’t really a storyline within the career mode, but what IS in career mode is a virtual map that serves to give players a means to earn gears (the currency earned through races that allows players to continue onto further seasons) and have a variety of modes to do so. Sadly, the campaign suffers from the repetitive nature of the races, especially after grinding for extra gears through the replaying of already-completed races. The single-player campaign DOES provide players plenty of races and maps to progress through (3 seasons for Rookie and Pro levels, with one final season on Veteran difficulty), but ultimately doesn’t reach its full potential with the all-too-similar feeling of races after longer play times.

The variety in cars does help in switching up the feel of races, with each car model driving differently and having a unique emphasis from one another (one car may have amazing handling, with sub-par speed and the other may be the opposite). There are a total of 8 cars, each ranging from a sports car-esque design to the absolute tank status of the final car Behomoth, which lives up to its namesake.

Also, there’s a modding system where you can attach upgrades to your cars that’ll improve any specific stat on said car model. There are improvements for everything from the engine to the wheels that can build up and make significant improvements to any given car model that you choose to upgrade. For example, the Renegade is pretty slow but has decent handling when first received. However, if you apply plenty of smart and strategic upgrades, the Renegade can keep up with any of the Pro level vehicles. 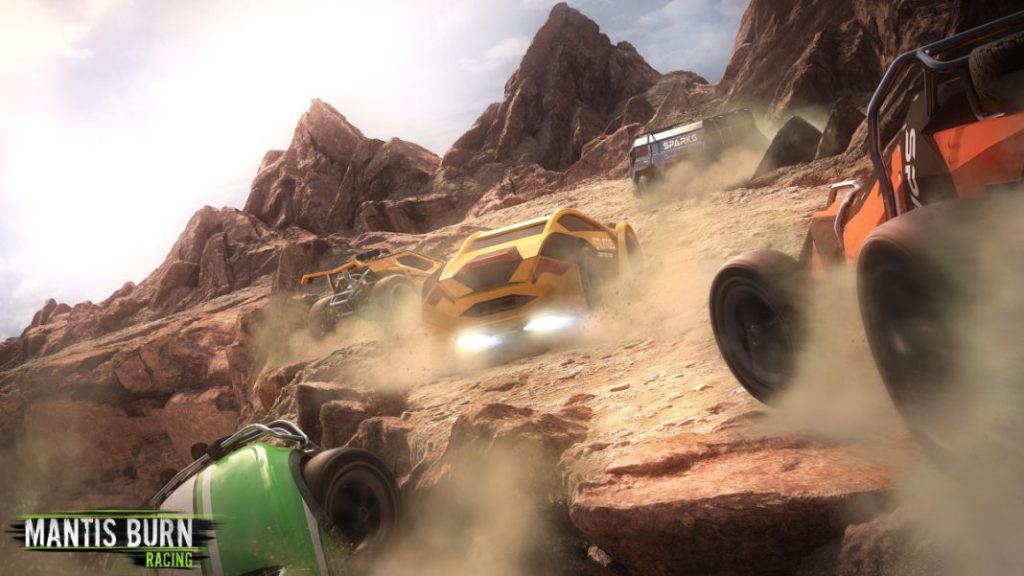 The player can gradually earn enough gold to buy each car, in which the process is connected to both the money system and the leveling system. For example, if you want to drive the Behomoth, you’d have to get to level 32 AND have the necessary amount of gold. Thankfully, although pretty simple, the progression system helped motivate me to do a number of extra races, as the bump up in level and potentially earning a new car part was too irresistible to pass up at many moments. 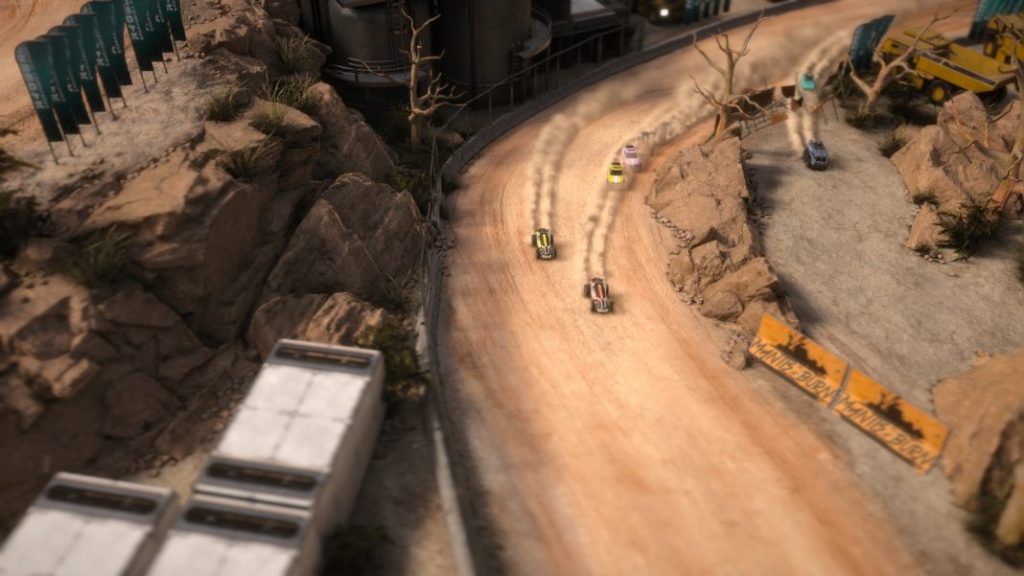 In terms of how the game looks, it’s quite pretty, especially when examined closely. With the exception of the car models being pretty simple in design, the maps, roads, and scenery are visually appealing with little details put into the background that wouldn’t be noticed without a driver taking their eyes off the race for a moment. Whether it’s from far away or up close, MBR offers plenty of pretty scenery to drive through and compete in. Every map is visually interesting and unique feeling, with a good amount of credit owed to the visual contrasts of the Sand Town maps and the Shangri-la maps that help make each region very aesthetically pleasing and distinct. 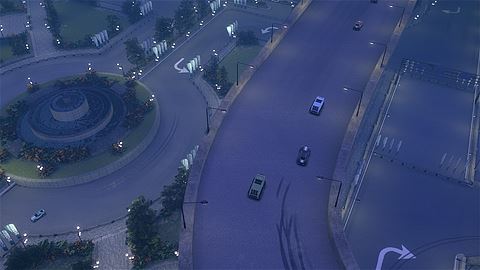 While driving through each race, MBR helped me realize why electronic music always gets me in the driving mood. The electronic music that was always placed in the background of each given screen helped provide a sense of relaxation and tempo throughout the playing experience. The music helped build the intensity of each race, as well as helped lower it after the races concluded. The music never stands out with many memorable tracks, but each track is enjoyable enough that the music was always going full-blast whenever a race was taking place.

When it comes to how many races you’ll play in each playthrough, it can range from only a couple to over a dozen. This was my personal experience, as I would see that I was only a race or two away from a level increase AND car mod, so I’d keep playing and playing until I ended up passing through multiple seasons in the career mode. However, this isn’t the case every time, as the races DO begin to grow a little tiresome as no game-changing elements are added as you play. The weekly challenges that are available are a nice touch, and give players a new task to accomplish consistently, but there needs to be more additions to game modes so that playthroughs don’t begin to grow stale.

Mantis Burn Racing is a great amount of old-school style fun, where simplistic goals and gameplay allow for entertaining, quick races for both the social and solo racers. The Career mode gives the game a good amount of longevity, even though it does begin to feel a bit stretched and stale after a while. It’s certainly worth checking out if you and your friends need a game that you all can play together, as a little competition always brings people together (except when it gets a little TOO competitive, especially during those tight finishes). Hopefully, the online player community on Xbox begins to grow and develop so more are able to experience racing with actual people rather than just A.I competitors. With a strong community base, Mantis Burn Racing can easily become another fun game to revisit every so often, especially with willing friends to join in.