These past few weeks, I’ve been playing TOXIKK – an old school style FPS Multiplayer Arena game from developers Reakktor Studios. When I was really starting to develop as a gamer, around the late 90’s, the type of FPS games that were prominent for me was Quake, Star Wars Jedi Knight: Dark Forces II and of course – GoldenEye 007. The thing that linked all of these games? They are all a part of the run-and-gun (or slash if you’re thinking of Jedi Knight) style of games that was THE format for FPS games. These kinds of games have fallen dramatically in popularity over the years in favour of more tactical shooters, with a cautious style of play.

You could argue that games like Overwatch, BattleBorn and more recently Lawbreakers have started to bring back that run-and-gun style of FPS but there is still an element of tactical play to these by having to choose from various classes and loadouts to fit in with your style of play the best. TOXIKK however removes the need for classes and loadouts to bring about a much more even playing field. Before I go on, check out the release trailer for the game below.

Right, firstly I must say that TOXIKK is a lot of fun. I expected it to be so and it didn’t disappoint. The fast-paced style, the weapons scattered around the maps, the differing game modes, they’re all very well done and make you think on your feet instead of going in with a set game plan. A point I made before, about not having any load outs harks back to the FPS’s of yesteryear, and there is a good spread of weapons to find throughout each map – with the most powerful automatically being selected when you pick up a new gun. The guns are:

Right most of those guns are pretty self-explanatory, I mean we all know what a shotgun or a sniper rifle is, but that last one…the Beryllium Fusion Gasificator, well shorten it down to the initials and you have the BFG – an obvious homage to DOOM and the gun is pretty much just the TOXIKK version of the BFG 9000 from DOOM. A little tip – don’t use in close quarters. You have that one for free people. The thing is here, though, that most people tend to go for the Cerberus because, well it’s a rocket launcher – it deals masses of damage and you don’t have to be a sharpshooter, whereas you have to have a certain amount of skill in order to get any amount of kills with Falcon sniper rifle. Ahem.

The graphics within the game are nothing groundbreaking by any stretch of the imagination, but they are certainly not awful. Sometimes you get a fair bit of overlapping, which is unfortunate, but not always avoidable. With games like Gears of War coming out which are absolutely pushing the boundaries of graphics, TOXIKK is putting more of their stock into the way the game is played than how it can push boundaries – but as Julio Cujo’s review the other day clearly shows – you can certainly have both. 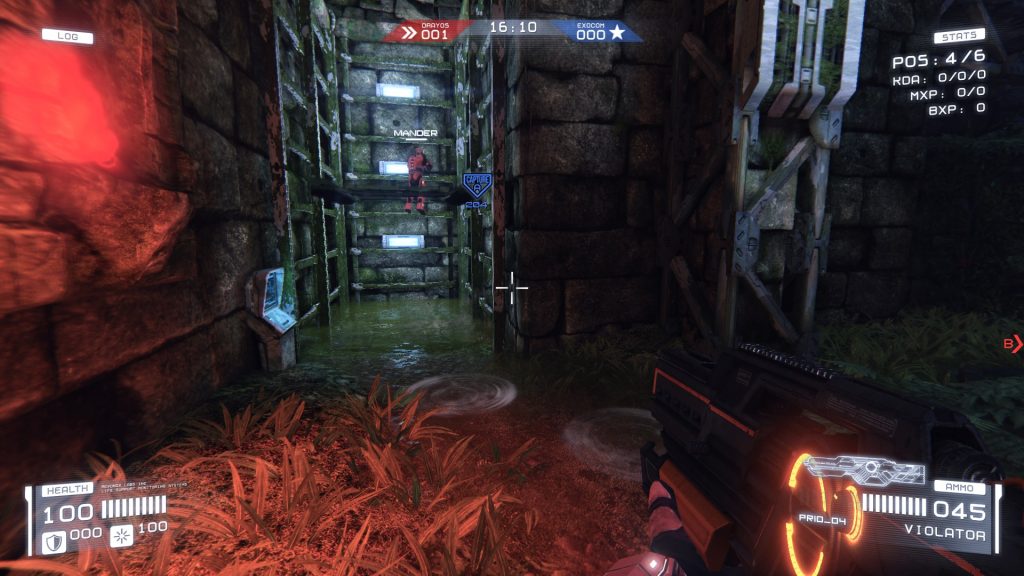 There is an element of customization within the game as well that is pretty cool, TOXIKK encourages you to play lots to gain more and more accumulative MXP (Match Experience) – the more of this you have, the more customization options you have to play with when it comes to your own player. You can change the helmet, main color, sub-color, camouflage and main armor – however from the games I’ve played, I seem to be that rare breed of player who bothers to customize my gear. Whether that’s just the luck of the draw with who I’ve played against or not, I can’t say. But the ability to customize yourself in the game is one reason to continue playing the game – especially if you’re a completionist. 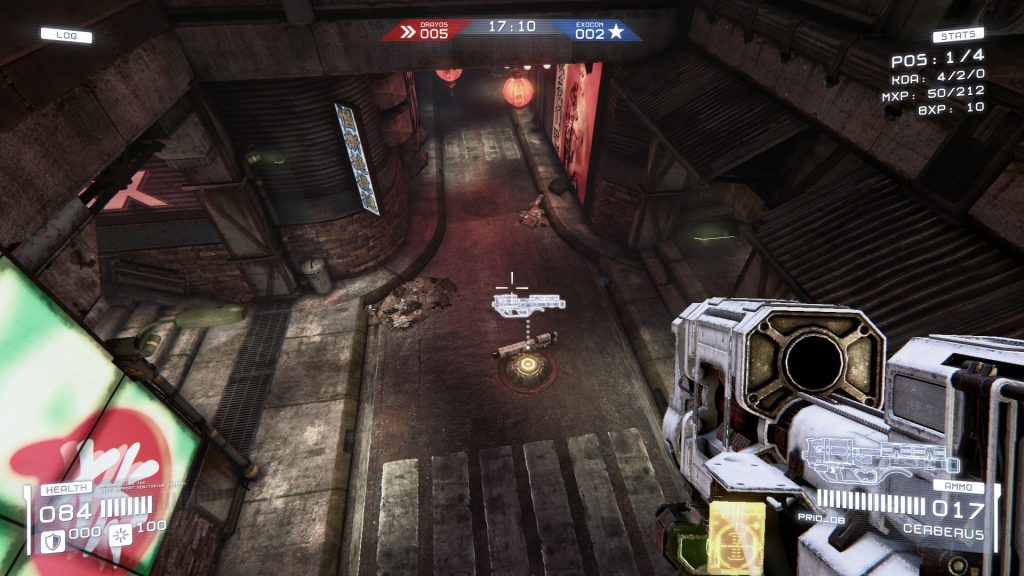 TOXIKK is a multiplayer game first, with a very limited single player mode – which is basically an offline multiplayer with bots. It’s not all that good to be honest, but I would certainly recommend it for new players to get a feel for the controls and the way the in-game physics work. The multiplayer is really good fun, and you will find yourself in the thick of the action almost immediately, with 4 different game modes:

Bloodlust and Squad Assault are both pretty much of a muchness (as we Limey’s say here in the UK) and as the 2 styles of deathmatch are pretty much what you’d expect. Cell Capture is just a version of capture the flag, but can result in a bit of a stalemate if both teams have the other’s cell. The players holding their opponents cells can basically find a bit of a hiding place and the game descends into a bit of a dead duck. Area Domination is really fun, usually with 3 areas to “dominate”, once you’ve run over the lit up markers, your team will start to accumulate points, the more areas you hold the quicker you’ll rack points up, with the first team to 150 winning – I tend to find that I sacrifice myself a lot for the team in this game mode, running the length of the maps trying to regain areas and getting myself an absolutely horrible KDR to boot…well that’s my story and I’m sticking to it. It would usually result in my team winning, so I can honestly advocate that style of play! 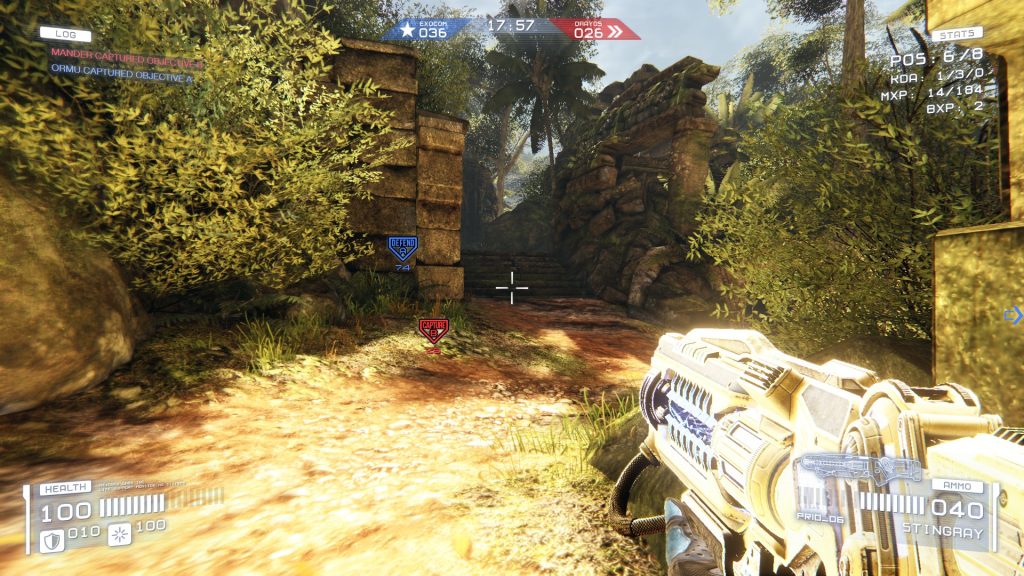 Coming back to play TOXIKK is an easy task, the gameplay is so easy to pick up and get into again, I would argue that you could go a good couple of months without playing it, start it up one random evening and be able to play like you’ve not been away at all. The trouble is, it doesn’t really have a massive amount to want you to go back to it. There aren’t very many maps, and more importantly – there aren’t very many players despite there being a free version of the game to download as well as the full paid version. Which is a shame, but links a little into the other issue I have with the game which is the small server sizes. Games with a maximum of 8 players is just not enough, there are maps that can hold up to 16, but I would argue that some of the maps that have a limit of 8 could and should be increased. 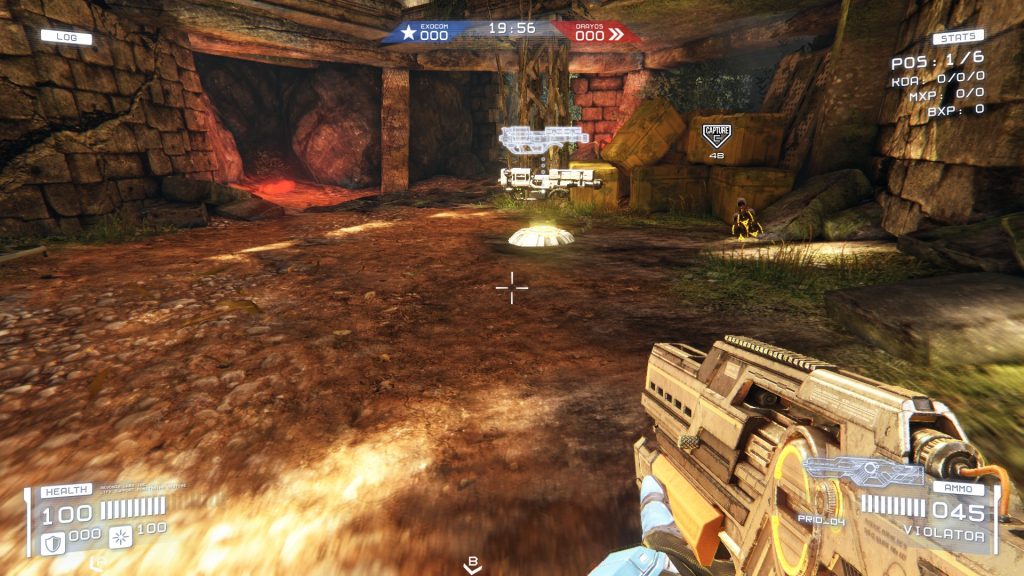 Overall TOXIKK is a great little game with a lot of character, but unfortunately not a lot of players. The game plays very smoothly and is a total blast, but after having played it for a few rounds, I was getting a bit of TOXIKK fatigue, and felt like I needed something else. I’ve been trying to get a good hour or more into this game for the past 2 and a half weeks, but that would be my limit, more than 2 hours and I’d be getting very tired of playing. When in game, and in server that’s got a good crowd, this is an absolutely fantastic game to get into, but those servers are as rare as hens teeth unfortunately. It would definitely appeal to those of you who have a good squad to play with on Steam, otherwise you could find it lacking, but for the price you simply cannot go wrong.