Due to the deal with Sony which meant the first three instalments in the main series of the Resident Evil franchise would be exclusive to the Playstation console at the time, the game which both developers and some fans of the series consider the true sequel to Resident Evil 2 would instead be classified as a spin-off entry. Created in tandem with Resident Evil 3: Nemesis, it would also be the first game to debut on a console other than Playstation, this time being temporarily exclusive to the troubled Sega Dreamcast. 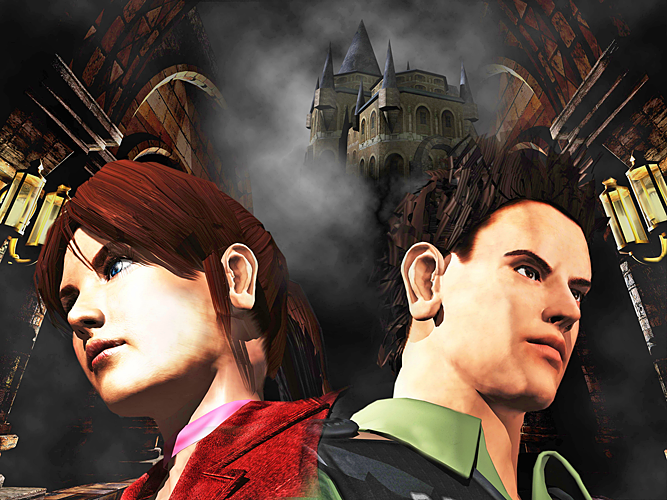 Whilst Resident Evil 3: Nemesis focused on Jill Valentine and her escape from Raccoon City, the events covered in Code: Veronica took the player away from the Raccoon district for the first time in the series. Not only that, the game featured two locations far from each other, unlike previous entries which focused on a single area. The idea of travelling around the globe would remain unused until much later in the franchise.

The game begins with Claire Redfield, survivor and one of the lead characters from Resident Evil 2, infiltrating an Umbrella base somewhere in Europe whilst searching for her brother, Chris Redfield. During the opening cinematic, she fights off Umbrella soldiers, including a helicopter gunship, until she is eventually captured and sent to Rockfort Island, a prison complex somewhere in the southern hemisphere. Upon waking up, she is freed from captivity by Rodrigo Juan Raval, a security guard working for Umbrella. It turns out an outbreak of the T-Virus has occurred on the island, turning the majority of the prison’s staff and inmates into zombies or worse.

During her attempt to escape the island, Claire meets and teams up with Steve Burnside, a fellow inmate on the island. He is initially distrustful of Claire, working alongside her reluctantly and coming across as kind of a moron. As the story progresses, he warms to her, opening up and even falling for her after he discovers his father has been turned into a zombie by Umbrella. It transpires that both Steve and his father were imprisoned by Umbrella as the latter was an Umbrella researcher who tried to sell information to another company. Steve is forced to kill his father, an event that deeply disturbs and upsets him.

Both Claire and Steve also encounter the commander of Rockfort Island, Alfred Ashford. Unstable and insane, Alfred has developed two personalities; himself and that of his twin sister Alexia, who has been in a 15-year cryogenic coma after developing the T-Veronica virus. Having injected herself with this new virus, Alexia put herself into cryogenic stasis to counter the problems the virus created. Alfred now acts as both twins, and frequently appears to attempt to kill Claire and Steve. As they escape the island via plane, Alfred changes the flight path, taking them to another Umbrella facility in Antarctica. Here, Claire and Steve are able to defeat Alfred, but not before he revives his sister Alexia, dying in her arms. Alexia then prevents Claire and Steve from escaping using her powers gained by the T-Veronica virus.

As this is happening, Chris Redfield (main character from the original Resident Evil, and Claire’s brother) arrives on Rockfort Island in search of his sister after being contacted by Leon Kennedy, Claire’s fellow survivor from Resident Evil 2. Upon arrival, he finds Raval, who informs him of Claire’s escape from the island. Raval is soon killed by a giant worm, which Chris manages to defeat before searching the island for clues to his sister’s whereabouts.

During his search, he encounters a familiar face from his past; Albert Wesker. Believed dead after the events of Resident Evil, Wesker’s return comes as a surprise to Chris, as does the new powers at his disposal, such as super-strength and unnatural speed. Wesker is on the island to retrieve the T-Veronica virus, and is also responsible for the T-Virus outbreak on the island. Before Wesker can kill Chris, Alexia Ashford appears laughing on a screen. Stunned that Alexia is alive, Wesker decides to head to the Antarctica base to confront her, closely followed by Chris.

After arriving at the Antarctica base, Chris is finally reunited with Claire. Both she and Steve were captured and imprisoned by Alexia, and now Steve is in need of rescue. Claire sets off to help him, whilst Chris goes to deal with both Wesker and Alexia. Claire finds Steve, but he has been subjected to experiments by Alexia, and now is infected with the T-Veronica virus. Steve mutates into a large Tyrant-like monster, and attempts to kill Claire. Retreating into a prison cell, Claire is attacked by one of Alexia’s tentacles. Fighting the effects of the virus, Steve manages to regain control of his mind, and kills the tentacle, saving Claire. As his body returns to human form, he declares his love for Claire before his death, leaving Claire to grieve over his body.

Chris and Wesker both confront Alexia, who’s powers prove too much for them. Wesker leaves Chris to face her alone, and escapes. Chris is able to temporarily stop Alexia, and activates the self destruct system for the base. This releases all the locks in the facility, freeing Claire from the prison cell. As Chris makes his escape, Alexia confronts him a second time, mutating into an insect-like form, before being defeated for good by Chris using a plasma weapon. As he reaches the emergency elevator, he spots Wesker, who has both Steve’s body and Claire. Wesker intends to use Steve’s body for research, as it is now the last surviving sample of the T-Veronica virus. Chris convinces Wesker to free Claire, who runs to a plane and waits for her brother so they can make their escape. Wesker attacks Chris, having the upper hand throughout the fight, but the two are separated by an explosion. Wesker vows to kill Chris next time they meet, and escapes with Steve’s body. Chris reunites with Claire at the plane, and they fly away from the base as it self-destructs.

As Code: Veronica was developed for a more powerful console than the Playstation, this enabled the developers to expand and improve the gameplay from previous instalments in the series. Instead of using pre-rendered backgrounds, the game uses 3D backgrounds for the first time. This enables the use of camera movements during the game that would have been impossible to implement before. The graphics are also an improvement, making use of the next generation technology available. New monsters were introduced, including the memorable Bandersnatch. This hideous creature is pretty unsettling to look at, with it’s putrid yellow skin, and flexible arms enabling it to attack from long range.

Another important enemy is the boss Nosferatu, who is in actuality Alfred and Alexia Ashford’s father Alexander. The son of deceased Umbrella co-founder Edward Ashford, he created Alexia and Alfred by injecting his ancestor Veronica Ashford’s genes into an embryo and implanted into a surrogate mother. This would in turn lead to the creation of the T-Veronica virus, which Alexia used on her “father”, turning him into the undead monster now known as Nosferatu.

Resident Evil Code: Veronica is probably most notable for reintroducing popular characters in the franchise, and for the return of series antagonist Albert Wesker. As the main enemy for each previous game was defeated by the end of their instalment, the series’ only link in terms of antagonist was the faceless Umbrella corporation. Wesker’s return enabled the franchise to use a recognisable character to further the interlinking stories going into the future, with Wesker working behind the scenes or being directly in control of proceedings. The reintroduction of Chris Redfield would also set him up as the series’ main protagonist, as his personal feud with Wesker would be an integral part of the franchise’s history. Chris would also go on to feature in multiple future games, becoming the most featured character in Resident Evil’s history.

Resident Evil Code: Veronica would be ported to Playstation 2 in 2001, and the Nintendo Gamecube in 2003, under the title Resident Evil Code: Veronica X, and would feature an additional nine minutes of cut-scenes added into the game, offering more information on the story for players to discover. Most of the new footage concerned Albert Wesker, as he was a fan-favourite and people wanted to see more of his character, especially as he had been thought to have been killed during the events of the first game. His resurrection and Matrix-like powers were also explained in Wesker’s Report, an additional feature available to those who pre-ordered the game in Japan, and written by the game’s director Hiroki Kato. Narrated by Wesker’s voice actor Richard Waugh, this fictional documentary was later made available to customers outside Japan through pre-orders or the official website.

Whilst not as popular as the first two games in the franchise, Resident Evil Code: Veronica is still regarded as one of the better instalments, but is often overlooked due to it’s appearance as a spin-off title. The gameplay would also become an issue in later years, when HD remasters of the games would feature more refined features in terms of controls and graphics, and this instalment unfortunately doesn’t stand the test of time as well as the following games. For fans of the series however, Code: Veronica would be a reminder of the survival horror gameplay abandoned by the developers in the coming years, with a shift in focus to a more action-orientated style of play that would be introduced in the upcoming Resident Evil 4. However, there would be one more addition to the series before this change took hold.