No Man’s Sky is probably one of the biggest talking points of gaming’s 2016 and unfortunately, not for all the right reasons.

Being developed by a tiny development team over a three-year period, the task of bringing 18 quintillion planets to life certainly wouldn’t be an easy task, even if they were procedurally generated. When it finally released there were…mixed feelings towards it.

Our review on RGM gave it a solid 7 out of 10 but we were certain it was a ‘Marmite’ type of game as the reviewers concluded:

“There is no middle ground here, you will either love or hate it. There are some great qualities below the inventory management and the game can feel repetitive. It feels more like a survival game than an exploration game, and has potential to grow and become even better.”

Some players immediately got lost in the game, some found the centre of the universe (something that was supposedly near impossible), whilst others found other people in the universe (something else that was supposedly near impossible). Cracks had begun to show in No Man’s Sky’s design and it became apparent that there were things missing from one of the most hyped games in recent memory. There was a lot riding on this, Hello Games first AAA title, and Sony had bagged exclusivity for the PlayStation 4.

Players began to lose interest in the game, finding it repetitive and lacking; player numbers dipped quicker than the value of global currency in the 1920s. At one point, it had been reported that more people were playing Borderland 2 (a four-year old game) than No Man’s Sky. Players felt they were mis-sold the game and that the developers had intentionally not discussed what was and what wasn’t going to be in the game. Then followed a mass refund. Many players receiving refunds from major retailers such as Amazon and Steam and currently, No Man’s Sky is under investigation in the U.K. for false advertising. There were reports that shops were covering certain areas of marketing and boxes with stickers to hide bits of information. 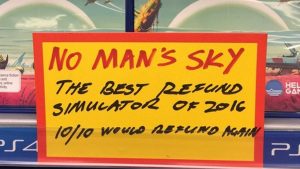 So what happened? How could they have got it so wrong? Did Hello Games suffer from ‘Peter Molyneux syndrome’ (promising more than you can deliver because you’re just over-excitable about the product, i.e. Fable) with selected mutism, intentional or not?

Throughout this whole debacle it seems Hello Games are just carrying on as normal; rolling out technical updates to No Man’s Sky whilst seemingly shrugging off these concerns from their fans and the community. Until now…

It has been detailed on Tech Times that Geoff Keighley, a videogame journalist, has revealed that Sean Murray of Hello Games is open to the idea of appearing on Keighley’s podcast to discuss No Man’s Sky and what went wrong. He is scheduled to appear on the podcast in October at some point, whether he will or not is anyone’s guess at this point, but there are a lot of people out there wanting answers.

It was reported that Keighley may feel partly responsible for over hyping No Man’s Sky from the beginning and was opposed to the game being full AAA release at full whack, suggesting it may be better suited to an ‘early access’ format.

I kept my eyes on No Man’s Sky although I will admit, it didn’t appeal to me, it was always on my periphery. To be honest, I never saw the ‘point’, people would say to me “you can mine things” and I would end up in an endless loop of “and then what?” I also got the impression that it would get old fast, lots of repetition; how many planets and species were the same but a different colour?

I don’t know, just something I had the impression of about the game. But I do know that if you mis-sell or mis-lead those who are interested in what you’re touting then you need to be held accountable and whether it was a genuine error or not, it needs to be explained. How else are people to know what the hell was going on? Integrity wise, for Hello Games, this is crucial, will anyone buy your products again if you feel you are going to be misled. They need some damage control or I can imagine their next game might end up boycotted.

Do you go back to the restaurant you got food poisoning from?

What do you think about No Man’s Sky? Is it being harshly judged, or is it missing key elements advertised as being there? Let us know in the comments below or over on the RGM Forums.