Actor and writer Brian Bloom will most likely have a voice that you will recognise after over 10 years voicing video game characters and 30 years as an actor. His latest game is Call of Duty: Infinite Warfare, where he plays Captain Nick Reyes but he also played one of the most iconic FPS characters of all time when he voiced BJ Blazkowicz in 2014’s Wolfenstein: The New Order.

In a recent interview with Two Left Sticks, Bloom may have given the game away with regards to the next Wolfenstein game, when asked about BJ’s unknown fate at the end of The New Order.

“I’ll be safe with this answer. If you look at Bethesda’s E3 2016 lineup there was a title hinted at in a cool way. It sparked a bit of wildfire.  That subtle, very simple DOS language, going through the titles. Perhaps we’re working on that as we speak.”

He was referring to the DOS inspired image displayed by Bethesda at E3, which showed a load of id Games dating back to Commander Keen in 1990 through to 2016’s DOOM. In amongst the titles after “Old_Blood” was “New_Colossus” which had no release date unlike the other games that were listed. 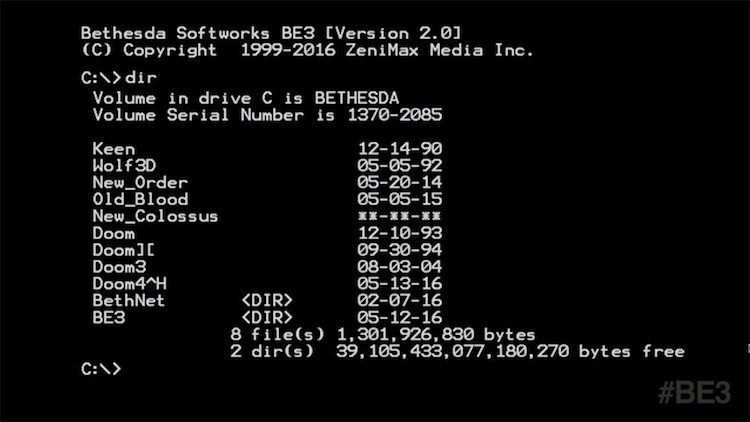 Up until now, there has been no confirmation as to what New Colossus could be – whether it would be a new Wolfenstein game or a new IP altogether. But now with the news from BJ himself, it looks very much like we will be seeing more news on Wolfenstein: New Colossus in the months ahead.

How much did you like New Order? Are you excited by the reveal of Wolfenstein: New Colossus? Let us know in the comments below, the RGM Forums or on Twitter.