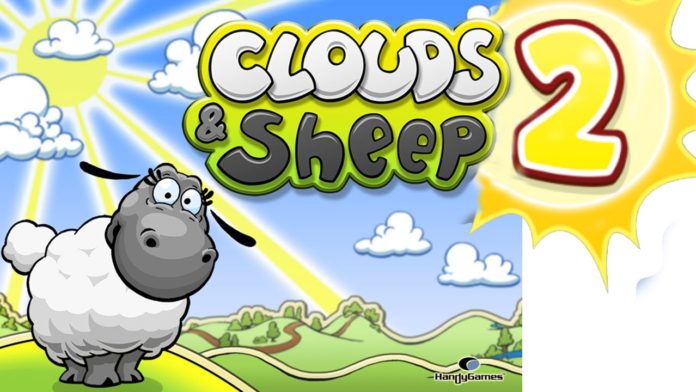 You know in the Sound of Music when the Von Trapp family are fleeing through the picturesque Alps of Switzerland, escaping the clutches of the Nazi regime, with all the fields? Surely there must have been some sheep on their travels. Given the spread of Nazism in Europe of the 1940s it wouldn’t surprise me if the sheep were bloody well Aryan anti-Semites. After playing Clouds and Sheep 2 I’m even more convinced this is the case!

First of all they populate their country very quickly. Within no time I was dealing with a field full of sheep and I had to give them some more “Lebensraum” (living space). And, by Jove, are they demanding little things. Hell’s bells they are always wanting something; food, drink, something to do, heat, sleep…Now I can empathize with Babe (the sheepdog pig)! They’re cunning though, they wrap up their malicious demands and genocidal tendencies amongst a fluffy and cheery demeanour (mostly), spending their time acting cute, “baa”ing innocently as though we’re not onto them.

Ok, I suppose I best stop this analogy before ‘Heepler’ appears with ‘Shimmler’ to carry out their ‘Final Shear-lution’. 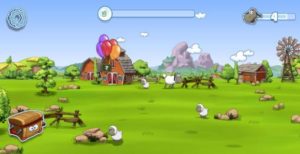 So, Clouds and Sheep 2…to be honest I didn’t know there was an original Clouds and Sheep. The game itself has a relatively simple concept, you as the almighty controller in the sky, must cultivate a flock of sheep. You must ensure that your sheep remain healthy and happy whilst you expand the number of sheep in your flock.

On booting up the game, you are greeted by a colorful screen with a happy sheep smiling inanely, just begging you to press the ‘start’ button and get right on into the sheep shearing action! It became abundantly clear very early on that the game is ported over from a mobile phone/touch screen design. The design of the menus and how you interact with the sheep are all begging to be touched with an index finger. During the tutorial messages, the demonstrations are done as though you were actually using a touch screen, the animated hand literally dragging an item from the menu screen to the play area.

I reviewed the game on Xbox One and found myself a little frustrated with the controls, though the actual controls were effective enough and not inherently different, I did find them far from intuitive. Endlessly I found myself pressing the wrong buttons, opening menus and finding myself on the environment select page without even trying. This was infuriating at points when the needs of the sheep increased exponentially later in the game, when the number of sheep increased alongside my duties. It was clear that the simple accessing of what you wanted via touch would have been much preferred. Furthermore, moving the sheep around became frustrating, trying to get two loved up sheep to actually nuzzle on occasions was infuriating and by the time I had them together, one had lost interest!

The games presentation is delightful and cheery. The animations are crisp as are the colors and art style. It is an uplifting style and certainly is endearing. The sheep themselves seem to have a great deal of character. They are humorously expressive throughout; they shiver when they’ve been sheared and are cold, they sigh and yawn when they are tired and they get angry when you have to inject them with medicine. And when lambs are born…awwwwwwwww!

I do think that sheep have got the whole mating thing a bit wrong. A male and a female sheep both need to eat a flower to create love hearts above their heads. Put them next to each other and they nuzzle each other, creating a giant love heart that goes into the clouds and upon connecting with a cloud, a baby sheep is born!!!! OK, I know, it’s obviously a family game and the first time it happens is really quite sweet.

So that’s the sheep in title, but what about the clouds? Well, the clouds are essentially the Yin and Yang of the game. They are a natural ally and enemy at the same time. Nicely animated, they come in various sizes. By grabbing hold of one using the ‘A’ button you can drag the selected cloud around the screen and collect other clouds to create bigger clouds. Bigger clouds turn grey and are capable of creating rain; needed to grow crops for the sheep to eat and to create puddles of water for the sheep to drink. Make them any bigger though and they turn black and are capable of firing lightning which can hurt your sheep, or even kill them!

They do serve purpose though, despite their danger. Sheep will basically eat anything that they can that is put in front of them, save for other sheep, they’re not cannibals! Occasionally poisonous mushrooms will appear in the game space and a sheep will get very sick and maybe even die if they eat one and aren’t treated. Luckily, black clouds can zap them away with a bolt of lightning, just make sure Walter isn’t stood too close, or he’ll take a 1000 watts in the woolen part of his nethers.

In playing the game you have to work with four key resources;

Some resources and features such as more living space and the trampoline (for the sheep to play on of course) require a combination of the resources in order to purchase them. Keeping your resources topped up and managed is essential for success in Clouds and Sheep 2. Storage of these resources can be increased by unlocking upgrade points which you can achieve by completing in-game tasks or quests.

Some of the quests will be simple, helping you on your way type of quests; ones that will get you to experiment with all of the functions. One was to press and hold ‘A’ on a sheep to find out what his dreams were so you can fulfill his wishes and make him happy, for more stars and other rewards. Quests will take you to the other environments looking for treasure, relics or mythical legends, such as the Fountain of Youth! Completing these challenges will give you rewards (such as new items to unlock) and boost your player level which eventually unlock new areas to play such as the Prairie and Winter Wonderland. Both of which have their own style and look, trees in the Winter Wonderland are covered in snow, for example.

Failure to look after your sheep may result in the sheep reaching an untimely end, literally turning into a cloud in the sky. A gravestone will then haunt your playing field, unless you pay five stars to revive them.

Sound in the game serves its purpose. The music fits the tone of the game, it’s light-hearted and unobtrusive. The music dissipates at night and the sound effects of a night-time are suitable, over the sound of the snoring sheep. The sheep make some great “baas” and are joyous when you throw them into the air with a happy “yay” or “whoopee”. Though I did find it odd that there was no sound in the game at all until the very start of the game, I actually thought my TV was on mute on a couple of occasions.

There is only the one game mode; look after your sheep until they all die (?), I never got to that point. You can reset your progress if you want to go into it fresh. There are useful stats that allow you to see how you are performing, although not entirely easy to find as they are only indicated by images rather than any text being used.

There’s also no multiplayer feature in the game, though to be honest, I’m not sure how this would work. If it was designed as a touch screen game, then it makes sense that it would be for the individual. It’s well designed and the lack of micro-transactions is certainly welcome, not that they’re really a problem, but it is nice to not be pestered by in-game advertising. Special mention to Clouds and Sheep 2 for the achievements; both in the names (pun-tastic) and in the implementation of achievement tracking. The last three indie games I have reviewed have all had achievement tracking, take note AAA developers, a great feature that needs better support, kudos to developers Handy Games.

Though I was originally engrossed in the game, I quickly became fairly bored with Clouds and Sheep 2. I can see its appeal in its original guise; put it on a touch screen and make it available for people who are passing time on public transport, for example, and you’ll be onto an effective distraction game that will keep you occupied with colorful characters and quite addictive mechanics. But, on a console it wouldn’t be a game I would go out of my way to play. I can easily see kids loving this game and feel that is more the target audience for the game, but for me I’m not won over. The initial excitement of throwing all my sheep in the air became a chore after an hour of still needing to do it whilst attending to all of their other demands.

Feel free to share this review on a whole host of social media using the convenient buttons below.