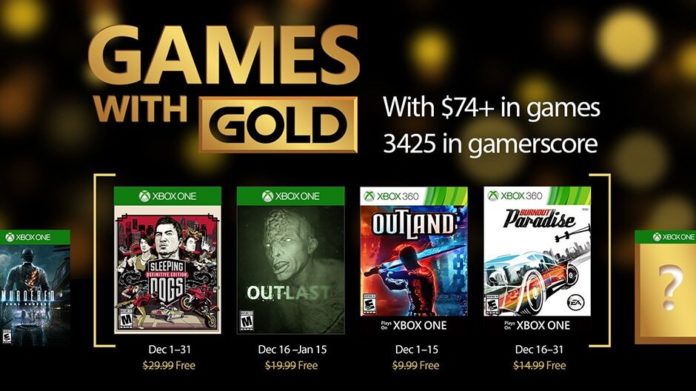 The new games coming to the Games with Gold program for Xbox Live subscribers in December have been announced by Major Nelson on his blog.

In his post, Major Nelson, revealed that Sleeping Dogs: Definitive Edition. and Outlast will be heading to the Xbox One.

On Xbox 360, there is Outland and the awesome and highly requested Burnout: Paradise. Don’t forget that means there are four titles on the Xbox One (two Xbox One titles and two via backwards compatibility from the Xbox 360) and two titles for Xbox 360 players.

Here is some more information on the titles that will be available during the month of December for Xbox Live Gold members:

Sleeping Dogs: Definitive Edition ($29.99) will be available through the whole month of December, from December 1st until December 31st.

Below are the titles that are for both Xbox One and Xbox 360:

Outland ($9.99) is available from December 1st until December 15th.

Burnout Paradise ($14.99) will be available from December 16th through to December 31st.

For Xbox gamers that is a possible total saving of $74.96 worth of new games if you decide to install each title available in December.

What do you think to this next offering from Games With Gold? Let us know in the comments below or on the RGM Forums.

Share this news with your social media friends via the buttons below.