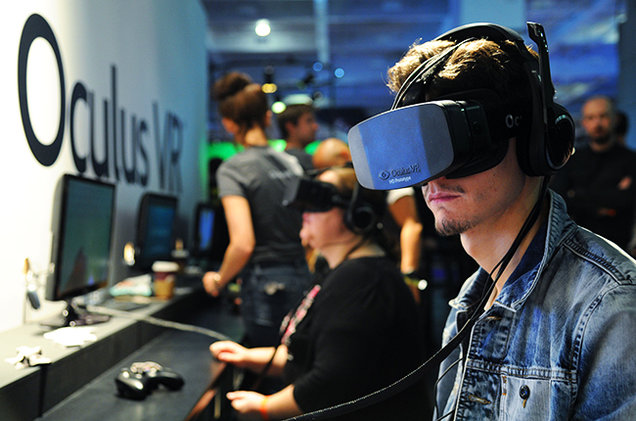 According to Engadget thank to the development of new technology by Oculus called “asynchronous spacewarp” consumers will now be able to run VR on much lower speed computers then previously.

Originally, the best and only option to run Oculus VR on your PC required the high-end monster capable of pushing your games to run at a smooth 90 frames per second, the optimal setting for VR.

The technicians at Oculus are now able to use frame interpolation techniques, allowing aysnchronous spacewarp to stabilize gameplay for steady gameplay at 45 frames per second.

Still with me? Essentially the better the framerate, the less VR confuses your mind and body so the less you get sick. Before asynchronous spacewarp, gameplay below 90 FPS would cause the player to become ill due to the shift in movement and the images on-screen not calibrating correctly and presenting clunky images. With the stabilization at a smooth 45 FPS it not only allows players to handle different frame rates but it also makes the product a more realistic purchase for gamers without monster PC rigs.

While Oculus still recommends using their VR on higher end systems and will continue to require developers to go for the 90 FPS benchmark this solution is a good starting point for those of us that are saving up for a better PC rig in the future but still want a piece of the VR cake.

For those of you wondering what exactly a qualifies as a lower end PC Oculus has stated that If you’ve got an aging gaming rig, there’s a chance that you can actually run the Oculus Rift today. While the company previously required an NVIDIA GTX 970 or AMD Radeon 290 GPU at the minimum, now you can run any NVIDIA 900 or 1000 series GPU (including the GTX 960), or any AMD RX 400 series card.

In even more Oculus news Avatars are coming December 6th along with the release of the new Touch controllers. The new controllers aren’t necessary to creat an avatar, but a select few owners of the new hardware will be able to use their new virtual avatars in Sports Bar VR and Kingspray.

If you are a developer there is more good news for you as you will be able to integrate the avatars into your games starting December 6th. A new retro experience from Oculus called First Contact will give customers a few ways to learn about the Touch controllers.

Will the ability to run Oculus VR on your rig finally make you jump into the VR world? Or were you on board day one? With a few other options do you think Oculus is the best VR system? Let us know in the comments below, on the RGM Forums or over on our Twitter.