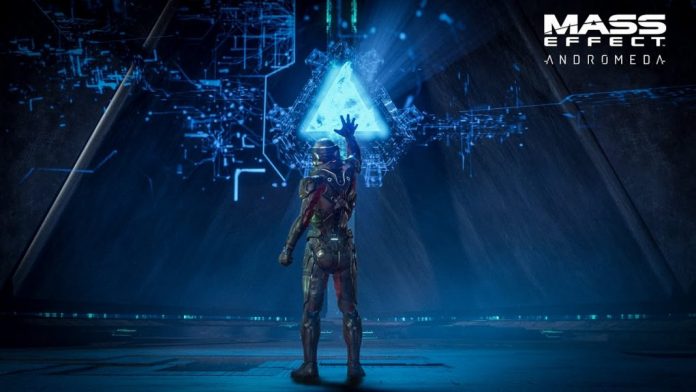 Happy N7 Day to one and all! To celebrate the big day itself, BioWare have released a “dramatic reveal trailer” for Mass Effect: Andromeda – check it out right here, right now.

The trailer starts off by explaining the voyage itself and answers a question immediately, with the voice over stating:

“We slept for hundreds of years, dreaming of a new home. But when we finally awoke, our dreams of peace – were shattered.”

The question being answered involving how this game would link into the original Mass Effect trilogy and the events of Commander Shepard and the Reaper War – the question being: how would the ending to Mass Effect 3 effect this game? In truth, it doesn’t look like it will have any effect, let alone a mass effect, (see what I did there!) especially when you consider that they will have been in a deep sleep or stasis for hundreds of years.

I think it’s safe to say that the Hyperion (the ship that our Pathfinders will be using to get to the Andromeda galaxy) would have left before the events of Mass Effect 3 at all – it would be a tricky time to estimate, but if I were a betting man, I would say in the interim between Mass Effect and Mass Effect 2. Why am I thinking this? Well, if we hark our minds back an entire year to N7 Day 2015, the Official Mass Effect: Andromeda video that was on show then was narrated by Jennifer Hale reprising (for the last time?) her role as FemShep, stating the following:

“We are travelers. Constantly moving forward and looking back. Alone and as one. We have no choice but to try for our insatiable curiosity. For our fear in what should happen if we don’t. You are that explorer now. We will say goodbye and you will look back one last time and know that wherever you go, we will be with you. This is Commander Shepard, signing off.”

To me, this is not only a message to the fans but one to the Pathfinders aboard the Hyperion. In Mass Effect lore and as canon as possible, it could really only have taken place after the invasion of the Citadel by the Reaper Sovereign and the Geth and before the prologue to Mass Effect 2. During and before the events of Mass Effect, Commander Shepard was well known yes, but not enough to have warranted making some stirring speech to those aboard the Hyperion. During Mass Effect 2 he was essentially disavowed by the Citadel Council after being heavily associated with Cerberus (and “dying” at the start) and of course between Mass Effect 2 and the end of Mass Effect 3 he was busy being under house arrest on Earth before engaging in a galactic war with the Reapers, so stirring speeches had to be kept to the front lines really.

Therefore, after the Geth and Sovereign invasion of the Citadel, when Commander Shepard was heralded as “The Hero of the Citadel” and before he died, this is the kind of thing I could have definitely seen him doing in between hitting geth outposts.

I would be very surprised if this was not the case, but then BioWare are good at throwing narrative curve-balls at us! The trailer however, looks absolutely amazing and I cannot wait to sink my teeth into Mass Effect: Andromeda in Spring 2017. Mass Effect: Andromeda will be available on PC, PS4 (and PS4 Pro) and Xbox One.

What do you think of the trailer? It’s set hundreds of years after the events of the original Mass Effect trilogy, but would you agree with the assessment that they would have set off between Mass Effect and Mass Effect 2? Let us know in the comments below, the RGM Forums or on Twitter. If you like what you’ve read then feel free to share this article on Facebook, Twitter, Google+, Pintrest or Reddit using the buttons available!