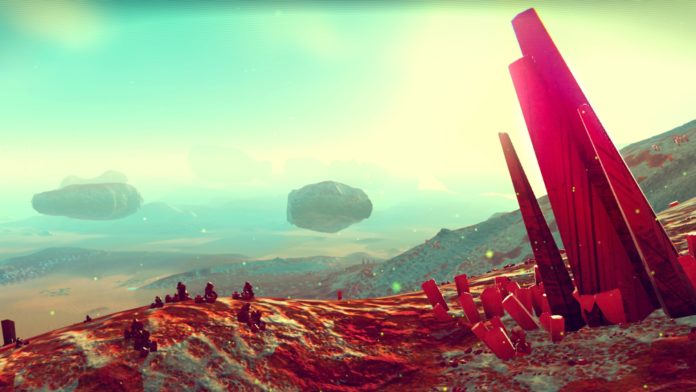 It seems that there may be an inkling as to what Hello Games has been up to during their two months of silence since the launch of No Man’s Sky. With this post on the NMS website, the Foundation update seems primed to set the base layer for base-building to now be a part of galaxy exploration. This, alongside a series of free updates, will gradually be added to the game over time.

The flashiest addition is the ability to now take advantage of the many different planets you visit through customization and open design choices. Players can find an uninhabited base and customize it to their liking. The player’s resources will come in handy as much of the shelter-design and base decorations will utilize the precious resources that players grind for. You’ll be able to hire alien lifeforms to work on the player’s farming, technological advancement, engineering, and weaponry necessities.

If you’re worried about losing your planet among the endless amounts of worlds, there will be an option to develop a teleporter so the home planet is always accessible. After all of your creativity and resources have been expended, and you end up finding an even better planet in your travels, then you can deconstruct your base to regain those resources.

This is a video that gives an idea on how the system will work:

The post on the site further explores how base elements like growing plants will actually progress over time, with players typically needing a farmer to properly cultivate these plants. There will be at least ten new plant types to grow and use.

Along with this comes three options for what kind of gameplay experience players want:

Creative mode allows players to explore the universe without limits, and build a huge base.

Players will be able to craft equipment in the field, with the ability to also place save points anywhere in each world, which Hello Games recommends you do for any Survival mode players. Waypoints will be able to be placed so that players don’t lose sight of a potentially-great discovery, which is something that was originally quite annoying while in the middle of an exploration-heavy play session. Communications Terminals can also be left for other players to find and read (the influx of dirty jokes and insults will be both tasteful AND charming, I’m sure).

There will also be an option to buy freighters for item and resource delivery to any destination in the universe. Resources can also be warped to the freighter, which could be quite beneficial for those lacking room to hold onto their plentiful amount of resources. Base-building will also be an option here, with the ability to customize the ship to your aesthetic preferences. Those previously mentioned weapons and science specialists can also be placed here, along with those farmers who can preside over your particularly rare crops.

New resources have also been added to give the worlds new life and items, like the new Advance Mining Laser and Hazmat Gauntlets which will help find those impossible-to-find planetary elements.

Along with UI improvements and the inclusion of motion blur while flying comes the many different fixes on every aspect of gameplay. Everything from gameplay to technical aspects have received some sort of addition and fix with the Foundation update, and the list is pretty massive. There’s far too many to list here, but they can also be read up on through the link at the beginning of the article.

Overall, this seems like an impressively substantial update that could prove to be a big game-changer for players who felt slighted by the original game’s quality and design. Now, certain discrepancies like “too much grinding” or “one gun? Seriously?” have not been taken care of, so it may be some additional time before all the issues are taken care of. This does seem like a step in the right direction for Hello Games who still have a long ways to go before gamers can accept them into their hearts again.

The Foundation update can prove to be a great step in the right direction for No Man’s Sky, and players will have to stay tuned to see what kind of future updates come to improve this perhaps too-ambitious gaming experience.

If you want more details on the update, check out the link above or watch this video:

What do you guys think about this update? Is it enough to get you playing again? What would you like to see added in a future update? Let us know in the comments below!