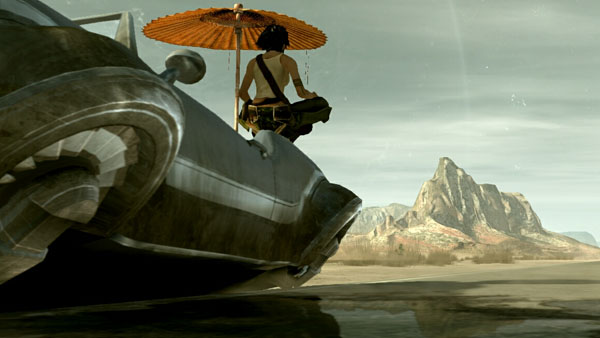 In the past few months, news broke that Beyond Good & Evil 2 is officially in production. While rumors about the game have circulated for years, Ubisoft’s latest quotes help solidify the game’s existence.

In an interview with Kotaku at Indiecade Europe, Michel Ancel, the creative director for BG&E2, gave some insight on why exactly the game has taken so long to be officially announced.

In response to the art he released in September, Ancel stated “That was not a gimmick but a way to say ‘Look. The game exists and we can do it.’” According to Ancel, the team has been steadily working on the game since the release of Rayman Legends, but is still quite a ways away from release and more news about the game won’t be released until it is “more concrete”.

As for the explanation on why the game has taken so long, Ancel cites technology restraints that have held back the project’s ambitious desire to include interplanetary travel until about two years ago.

“Even on Beyond Good and Evil 1 it was supposed to have space travel and all these things but we were limited,” Ancel says. “The big thing that is really cool is that the consoles are now so powerful […] The amount of memory the CPU has, you can do those things now. It’s not ‘Oh, we will never do it.’ It’s working. I’ve been working on [Beyond Good and Evil 2] for a long time, on the technologies that allow you to create those kinds of games – tools to draw the big planets and things like that,” Ancel says. “We’re confident on the quality and that we can achieve that kind of game.”

Ancel also stated that even if he wanted to make the game sooner, one of the main challenges to creating a galactic scale game is the computational problems that come with building a galaxy.

“[We had] big questions that are so big you can’t know the answers because no physics engine can handle all of the dimensions and speeds and things like that,” Ancel says. “It’s like ‘Okay, if no physics engine can do it, how can we achieve that?’ “It’s crazy and difficult to explain to people how technical making a game is. Now it’s not anymore about polygons and things like that, it’s about millions of behavioral AIs, systems, and giant spaceships crashing on big planets.”

Creating the planets by themselves isn’t enough for Ancel either. “Its all about diversity” Ancel said. This fact has only been exemplified in the recent months with the release of No Man’s Sky, which was able to develop a formula to create the planets but was criticized for having a repetitive and generally empty universe.

While Beyond Good and Evil was a critical success, it struggled to make much of an impact in the commercial area. However, according to Ancel, monetary success isn’t a concern for the sequel thanks to Yves Guillemot and Serge Hascoet, Ubisoft’s CEO and chief creative officer.

“They want these kinds of games to exist,” Ancel says. “When they wake up in the morning they don’t want to make money – they’ve got money for ten lives if they want to stop. It’s not a question of power or money now. What reason has this company to live: Is it to beat competitors? No, [Ubisoft’s] already in the top three. It’s being able to create things that have never been created before. [Guillemot and Hascoet] are the ones that want to make this happen. They ask the creatives ‘You want to do it? We can do it.’”

Ancel is one of many Ubisoft employees singing high praises of its leadership, especially now with the threat of a hostile takeover by Vivendi. This is why Ancel fears for the possibility of losing his biggest supporters that just so happen to be his potential financiers.

“There is something very fragile that makes a company what it is, [It’s made of] people who have been working together for a long time. It’s always the same, if you look at King or Supercell, it’s a group of people who did something very strong at a certain time.”

“It’s not just one person most of the time, it’s a lot of people who make the team work. If you change the team this fragile system could break, it’s a risk, and today there is no reason to change it, unless people want to make more money. But Ubisoft is good at what it’s doing.”

When asked about how the team handles the rumors and very real threat of the Vivendi takeover, Ancel says that he and his team try their best to not let it affect them. Their team and many others across the company remain focused on their projects. Their pride in their work isn’t simply because their company is immensely successful. They feel a sense of kinship and a personal connection working there.

While BG&E2 may feel far, far away, just know that Ancel and company are hard at work on the project and they’re determined to make a sequel that’s truly worth the wait.

Did you enjoy the first Beyond Good & Evil? Do you think the sequel will be worth the wait? Will Vivendi take over Ubisoft? Let us know in the comments below, on the RGM Forums, or over on our Twitter.