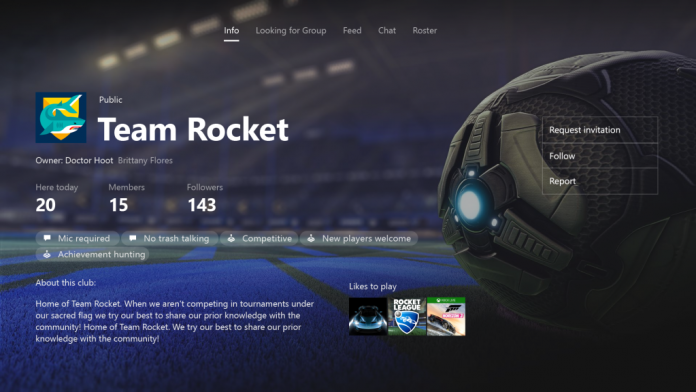 The latest update for Xbox has begun rolling out to the wider public. Members of the preview program have already had an opportunity to play around with these new features, now it’s your turn.

Some of the key features included in this update are:

Clubs are gamer-created and managed groups that can help you meet people and grow communities of gamers who love the same things you do. Anyone can join or create a Club, and you’ll probably see a Club for just about everything. If you do not, creating a Club is quick and easy.

Achievement Rarity, a top fan request on Xbox Feedback, helps you discover just how unique an Achievement is among players of a given game. When you earn a rare Achievement, you’ll get a special notification and diamond icon highlighting it. Unlock one today and let us know how you like the new animation!

Group Messaging helps you coordinate and keep in touch with your friends and fellow gamers by sending a single group message to everyone in a single conversation. You can also add people to the group and dynamically change the conversation topic. Group Messaging works across Xbox One and the Xbox app on Windows 10, iOS, and Android devices. To help you write your messages even faster on Xbox One, we have added a new predictive dictionary which you can quick access with the right thumb stick on your controller.

Emojis will be joining your virtual keyboard on Xbox One! In addition to the existing alphabet and symbols that you can use, you’ll now be able to express your likes, dislikes and more with a host of different emojis on Xbox Live. Once on your virtual keyboard, you can get to emojis by pulling the left trigger until they show up. From there, select any emoji, or press and hold on one to see more related emoji.

For a full break down of the contents of this update please visit Major Nelson’s Blog.