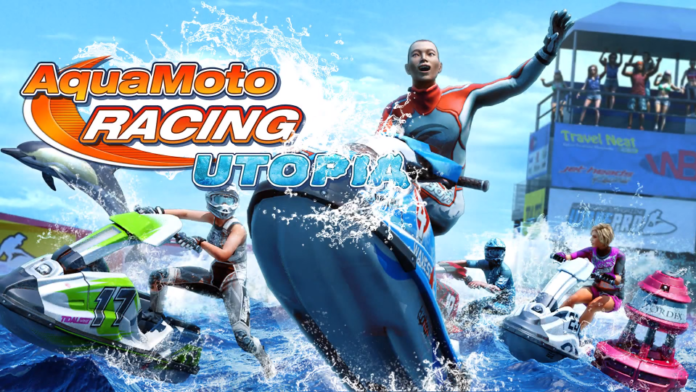 Aqua Moto Racing Utopia was developed by Zodix AB and released November 30, 2016 on PC and PlayStation 4. I played the game on PC for this review.

When I first started Aqua Moto Racing Utopia and booted up the tutorial, I wasn’t impressed. Right off the bat it was made perfectly clear that this game had some technical issues. The graphics options are threadbare; there are only four graphics presets with slight texture differences alongside choices of refresh rate and resolution. It’s clearly going for an animated, colorful, barely realistic art style but for the most part it works. There isn’t really a story to speak of, as you simply create an avatar that competes in championships. The foliage has a very high level of detail regardless of preset chosen and provides a decent sense of immersion when present. The water is particularly well-rendered and looks great even from of a distance. The soundtrack is decent enough, with the sounds of dolphins and waves pleasant to the ears but in the end it falls a bit short, with no really unique qualities.

While technically playable with a keyboard and mouse, the command tips and menu layouts are all clearly built for an Xbox One controller. Seriously, if you’re going to play this, you have to use a controller, otherwise the poor keyboard controls will drive you crazy within the hour. With that said, it utilizes the functionality of a controller rather well. Acceleration, drifting and doing tricks out on the water are all controlled intelligently using only the triggers and thumbsticks, with the A button handling your Turbo. It’s simple yet it works remarkably. 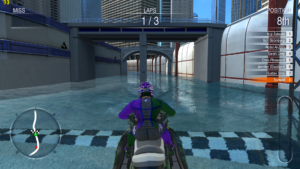 The gameplay of the races is built around a few key ideas. The first is drifting as close by a buoy as possible: The sharper your turn, the bigger your Turbo bonus. Miss a buoy entirely, you lose your turbo. Miss three times? You’re disqualified from the race entirely. You are heartily encouraged to ram into and knock over your opponents in order to take the lead. Money is earned for winning championships and doing tricks within races. However, in doing tricks you expose yourself to be knocked off course or have your lead stolen, so it’s fairly well-balanced. Sometimes it can feel a little cheap if you get hit by AI racers several times in a row but ultimately it serves to provide great motivation for beating your competition.

There is one major fault that comes into play though. The collision physics presented here, quite frankly, are terrible. Countless times if I was performing a simple trick like a 360 spin, it didn’t seem to matter if I stopped right before I hit the water, as my character model would be sent comically reeling off his vehicle regardless. To say this is frustrating would be putting it mildly, it makes learning from your mistakes very difficult as you are left constantly unsure if the game has a collision issue or if you simply didn’t pull off a stunt properly. 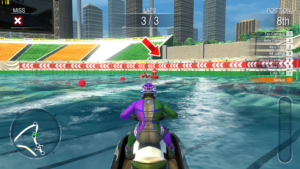 In the end, I’m fairly mixed on the experience I’ve had. You need to use a controller. The  graphics options are borderline nonexistent, the graphics themselves decent enough but hardly exceptional. There’s no real story to speak of. Yet with all that said, there can be no denying that Aqua Moto Racing Utopia is very, very, very fun to play. I just wish there weren’t so many caveats.