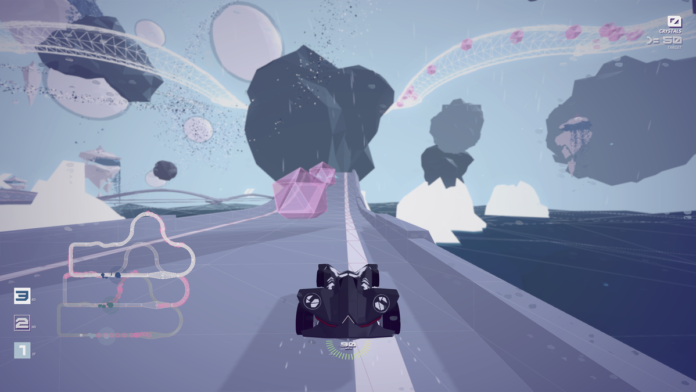 From the moment I read the description of this on the PSN store, I wanted to love it. I have always loved driving games since playing Outrun on my Genesis as a kid. I love quirky, odd games with interesting premises and I’m still easily excited by the new wave of retro games coming out online (Broforce is still the most played game on my PS4).

Graphically, this is decidedly not-even-last-gen, but with spruced up edges to 1080p resolution and a definite retro feel. The premise of driving blocky little cars around slightly bland tracks is also definitely quirky. The details on PSN Store sell it as a “brain-melting idea” where you “race & manage multiple tracks at the same time”. So you start in one car, but you have to keep switching between several to try and maintain good positions whilst the (deliberately terrible) AI takes over. Or as the developer describes it, “you’re going to have to hop from track-to-track on a regular basis to account for the subversively cretinous computer cars.”

So, I downloaded the retro-feeling, quirky driving game and got myself excited as the megabytes ticked away. Once in, I enjoyed what was on offer; simple racing controls and sense of silly fun dominate the game whilst you develop over a relatively gentle learning curve. I never felt like the game was too difficult, but it wasn’t devoid of challenge. This is one area that the developers got spot on. That said, despite the in-game hand-holding early on, some of the layout seems slightly confusing and I was left wondering what I was supposed to be doing a few times in my first 10 minutes. However, once you’re in, there’s absolutely nothing complex here; you brake, accelerate, boost and steer. The only complexity come from racing multiple cars at once and dealing with the broken AI. Yeah… The AI is really useless, plunging your lead to last place in seconds. And this is where I began to find it frustrating. The concept of the poor AI design was one of the aspects of the game that I found strangely enjoyable, but it only takes seconds for your unattended car to lose position and, despite being the game’s main selling point, I felt like I was constantly shifting cars and never fully involving myself with any one race.

Don’t get me wrong, this is a really fun little title, but unlike other “deliberately broken” games like the excellent Surgeon Simulator or Goat Simulator, Drive!Drive!Drive! seems to fall apart even when it’s trying. The handling reminded me of when you first jump in a car in GTA IV before you build experience. It somehow manages to understeer and oversteer at the same time depending on what’s going on around you.

There is multiplayer present, but finding matches was difficult. A lot of the time, I couldn’t find other players online and when I did, it didn’t really add much to the experience; the game was essentially the same thing. Ultimately, I gave up trying to play online and focussed on the single player which was less frustrating to get in to and just as satisfying.

Graphically, the vehicles are incredibly angular and simplistic in design and the lack of colours mean that the tracks sometimes blend in with the sky, leaving the player horribly unsure of where they’re going. Essentially, it isn’t that great. But the game knows this and makes up for it with its innovative ideas which are incredibly enjoyable. This has left me torn. It has all the makings of a cult favourite for its ideas and retro feel; managing (or mastering) the broken elements can be fun and that’s definitely the idea here. But what has me really unsure about this title is the price.

At the price, this needs to be better. Drive!Drive!Drive! is a fantastic $5 game that feels distinctly mobile-ish. With Games such as WipeOut or DriveClub and its VR version at similar price points, the quirky gimmicks just don’t add enough to justify the limited amount on offer.

Let us know what you think; cult classic that you love or over-priced mobile game masquerading on current-gen consoles? Get on the forums and get talking!