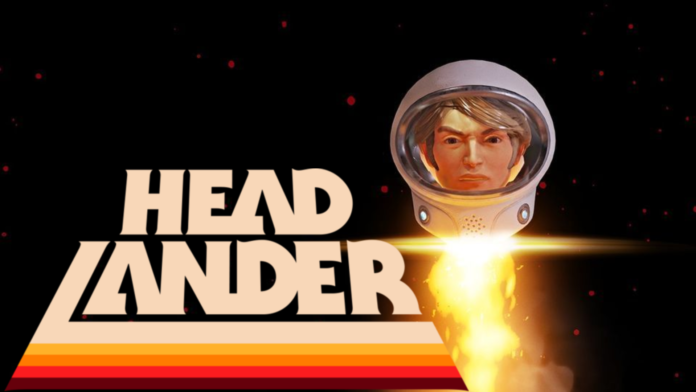 You know, I absolutely love a game with character and a sense of humor. I guess it feels like the game is really trying to engage me and have a laugh at the same time. Something I’ve always respected about Double Fine Productions is that their games have always had character; Grim Fandango, Psychonauts, Brütal Legend, I struggle to think of one of Tim Schafer’s titles that doesn’t make me smile or intrigued to play.

Headlander is no different. It’s unique, that is for certain, and it brings a great deal of fun and character along with it. Headlander released this year for PlayStation 4, PC and Xbox One. I reviewed the game on Xbox One.

So, what’s it all about? The concept is ace. Headlander takes place in a futuristic setting inspired by the 1970s science fiction television shows and movies, such as Logan’s Run. In this future, humanity has opted to upload their consciousness to a world-encompassing cloud storage (might just go cancel my iCloud), forgoing their bodies but able to occupy the minds of robots as to carry out necessary tasks or otherwise enjoy corporeal pleasures. However, an artificial intelligence named Methuselah has taken control of the robots, trapping the human conscious inside them, and enslaved them for some nefarious purpose (which we never really learn). The last human alive (you, the player) is awoken from cryogenic storage to deal with Methuselah, but only their head has managed to survive the process and is suffering from amnesia.

Headlander plays out as a 2.5D Metroidvania-style game. You are just a head in a space helmet flying for survival. The game starts with you getting to grips with the new world you find yourself in. Guided by a voice in your head, who is communicating with you, only known as “Earl”, you have to start making sense of what Methuselah is up to and then try to stop it.

But how can a severed head in a helmet get around I hear you cry? Your head has an ability that allows you to control the robots that inhabit the world; by vacuuming them off! Quite literally, you fly above your target robot and by pressing the RT you activate your suction function which pulls off the head leaving the body free for you to attach by using LB. It’s a quick and effective way to make yourself more mobile as one of the key gameplay elements to game comes in the form of the security doors. At the beginning you can “headland” onto civilian type robots, members of the space age public who are living their lives on “Satellite Fort”. Fairly soon, you realize that civilians can only get you through ‘grey’ colored doors and that you need to have a level of security to progress.

Your main enemies in Headlander come in the form of ‘Shepherds’, robot security with a penchant for shooting anyone who should not be in their jurisdiction. There are various forms of the Shepherds and the difficulty you will face from them will depend on their colour. Colour plays a huge part in Headlander and is integral to helping you get around. Most of the doors are of a particular color (of six potential colors, for the most part) and require the corresponding laser to shoot it open. Any color that is higher in the spectrum will also open any lesser colored doors (i.e. a yellow door will open yellow and both orange and red, which are below). The spectrum of color works for both the doors and the Shepherds you face; Shepherds of a higher color will be stronger than lesser Shepherds. There are also floating drones and security turrets to contend with, the latter feeling awfully remorseful as it lines up a killing shot.

There are some absolutely brilliant pieces to this game. Throughout you play you will encounter a lot of excellent ideas. One of my absolute favorites is without a doubt the ‘Arena’. It is set up with a chess motif; there are black and white “pieces” (robots you can control) and your goal at this point is to locate data points that needs to be uploaded to Earl, but require particular pieces to do so. Each piece have their own weapons, the pawns can only melee, poorly, as too can the rooks, which are stronger ‘bruiser’ builds. The bishops and knights however are genius, there weapons fire like the directionality of their pieces (bishops fire diagonally and knights fire forward briefly before turning another direction). It’s a great idea that plays out well, especially when you get the King (the ruler at this point is a Queen, which makes it acceptable). The two bosses are great too. Alas, there’s only two. They employ the white and black polarity focus in order to defeat them.

I found the game paced really well, even if there were only two bosses. It never feels tedious and there is a lot of exploring to do; there are loads of hidden areas which usually contain upgrades for your head. There are three types of power ups that you can use to upgrade your head; helmet health, helmet thrust and helmet power. Your helmet power is needed to power the abilities you find within the game to progress. There are several major upgrades you can find that provide you with new abilities to help you to move forward in the game. These can all be upgraded from upgrade menu using the energy you collect in the levels or by completing objectives.

In terms of things to do, it depends on how much you want to get out of it. If you explore everywhere as you go, you’ll find it’ll take you longer to get through it as well as completing the few optional side quests. There are only a few side quests you can take part in, usually which are very easily resolved. It’s a shame that there is little extra to do outside of the main quest as the setting may well have provided a lot of opportunity for further exploration of the dystopian world that was created.

The game looks great, and the game world looks great too. The environments are functional and add to the atmosphere of where you are, but there isn’t much in terms of variation. The colors change, but the look is the same. Fortunately that doesn’t detract from the game. It vaguely reminds me of the first two Oddworld games in its look, in the way the environments are presented. The characters look strong and are easily defined and they all have their own look, based on their model. When you headland onto civilians make sure you press B for a fun treat.

The sounds in the game are functional and never really stand out, except the rather funky elevator music at the beginning. It works and there’s nothing wrong with that. The sound effects also do the job with no issue in their implementation. The voices, though robotic, are great with their character and their voice lines are occasionally humorous, if not slightly repetitive. The turrets are great for their humor, they feel guilty for having to shoot you. The doors get special mention as their vocals are humorous and get to use wordplay with their refusal to let you through if you’re the wrong color. There was just one issue with the sound, when pausing the game the sound seemed to glitch and end up repeating, which was a little annoying.

There isn’t anything outside of the main game to play, there is no multiplayer in Headlander, but it would probably have felt shoehorned in. Thought, therein lies an issue, the game isn’t overly long, which is a shame as the ideas that went into the game were brilliant, so more of those would have been fantastic. I played the game to 100% completion (including all of the achievements) and I still felt it short. There were a couple of occasions when the game froze and crashed back to the dashboard. That’s not to say Headlander isn’t enjoyable, far from it. As PT Barnum said: “Leave them wanting more”.

Overall, Headlander is a fantastic, if a little short, game which really commits to its premise. It has some awesome set pieces and a whole heap of character. It’s color based mechanics a welcome addition to the game. I would certainly recommend a play.

Have you tried out Double Fine’s latest? What did you think? Are you tempted to play, if not? Let us know what you think in the comments below or on the RGM Forums.

You can also share this review using the social media buttons below.