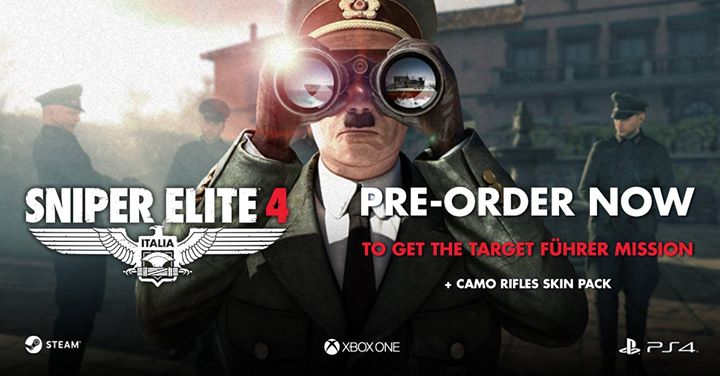 The latest trailer for the titular sniper series Sniper Elite 4, looks to be giving you a chance to take down the Fuhrer himself.

While the latest game is titled to take more of a focus on the Italy campaign of World War 2, developers Rebellion can’t resist dangling Hitler in front of the player.

While the video itself doesn’t reveal much except for a few vantage points and a possible assassination platform, the most important part of the trailer comes at the end where we learn the mission will be a form of free DLC for those that pre-order the game.

The mission Target: Fuhrer will offer the campaign mission to assassinate Hitler and 7 camo rifle skins for the player.

The Sniper Elite series has long been praised for its ability to present an open sandbox to players for their assassinations, but this time their number one target will seemingly only be available to those that pre-order the game which may be a double-edged sword for its players.

The trailer itself was released on Rebellion’s YouTube page this morning, to see more on Sniper Elite 4 check out their videos there before the game releases on February 14th, 2017.

Are you excited for Sniper Elite 4? Will this DLC push you to pre-order the game or were you already all in? Let us know in the comments below, the RGM Forums or on Twitter. If you like what you’ve read then feel free to share this article on Facebook, Twitter, Google+,