There is a lot of power in a one finger (or a thumb). A solid, pointed finger can be used to be confident and determined. A finger is used to indicate someones marital status. We can use one or two fingers to show our vulgar distaste for someone, or even to beckon someone closer. We even use our thumbs to signify approval or disapproval, hell it was good enough for Julius Caesar.

Building a whole game around the use of one thumb though, does sound a bit…I don’t know. Given that we have complex titles that use every button on a controller, or a full keyboard to control a game; a ‘one-digit’ title seems almost like a step backwards. Back to basics perhaps? Games used to only have one input, hell the original Sonic the Hedgehog only had ‘move’ and ‘jump’ (A,B and C on the Mega Drive all made Sonic jump) and we all loved that. As of course did our good plumbing friend Mario.

Super Mario Run is the newest 2D platformer from our long serving, dungarees laden chap. It is a first for the Mario series as it is not featured exclusively on a Nintendo console. Like Pokemon Go before it, Super Mario Run is designed for mobile. Currently only available on the iOS operating system, it is due to release on Android in 2017, the game comes with a quite substantial price tag ($9.99/£7.99) and, understandably so, needs to be worth your hard-earned monies. So is it worth it? Well, yes and no… 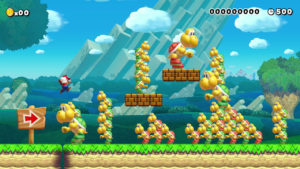 Super Mario Run’s premise might be one you’re familiar with; Mario has been promised a cake by Princess Peach and lo’ and behold, Bowser ain’t happy and takes off with her, just for a change (*rolls eyes). So it’s up to Mario to run after them and save the day. Bowser has managed to escape to his castle, six worlds and 24 levels away. It’s up to Mario to run his way through, literally and kick Bowser to the kerb.

Someone’s clearly stuck a quarter in Mario for this one. Mario doesn’t stop running, ever, he literally runs, I know its in the title but still. The point of his constant running is so you don’t have to. What you as the player need to do is to make sure Mario can get to Princess Peach by jumping over obstacles, onto enemies and across chasms. If you don’t Mario will get stuck, hurt or fall to his doom (there still needs to be peril, right?). To help Mario survive you have only tap the screen, doing so will make Mario jump, the longer you press, the higher Mario’s jump. Of course, there’s more to it than that, Mario can wall jump and launch himself from enemies and ledges, if you time your jump right, of course. He can also do a spin if you tap the screen again whilst Mario is mid-air. Mastering these techniques is vital to you achieving your goal of getting. all. the. coins!!!! Oh and rescuing Peach, of course… 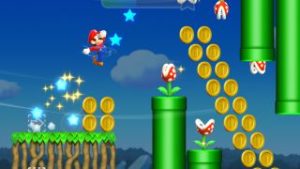 By jove are there a lot of coins. There are a whole range of colored collectibles, designed to keep you playing I imagine. Yellow, red, blue, pink, purple and black: 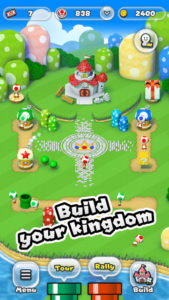 So what is the point of all the coins? Well as well as giving you a high score, you can use the coins to purchase building and decorations for your hub world. The hub world is what you are greeted with upon entering the game. There isn’t a lot to look at to start with and you can customize by collecting coins and buying things to spruce it up. Nintendo will be adding extra decorations to the game (as it is Christmas, there are some Christmas themed decorations, such as a Mario snow globe to put in your hub world). You can also check your progress of your ‘missions’. By completing specific tasks and levels you will earn bonus ‘Toad raffle tickets’. These tickets are your way to play the ‘rally’ mode of the game. This is the multiplayer component of the game, you can play repeating levels against a set time limit. The aim is to see who can win the Toads favor and the most coins, you or your opponent, a real life person. I don’t believe you are facing them in real-time as there was never any waiting time, but perhaps they are. By succeeding in rally events you will earn coins and Toads.

Toads will populate your hub world on your success in the rally. The more toads the more unlocks you make available. There are five colors of Toad and getting a good variety of these colors will ensure that you unlock everything, including the additional characters: Peach, Yoshi, Toad and Luigi. These extra characters have slightly different characteristics, in the same way that different characters did in Super Mario Bros. 2 back in the day. Using the different characters is key to ensuring you get the harder to obtain purple and black, level specific coins.

What I really enjoyed in the game was the nostalgic feel. The sounds really play a key part of this, perhaps more than the other things. For the most part they are spot on, the jumps, the enemies being defeated and the Charles Martinez as Mario are all excellent. The music too is, almost, spot on, the airship levels includes the music from Super Mario 3! The one let down were the castles, I didn’t feel the music was as good, perhaps I was expecting the music from a previous Mario game, just felt it was lacking. All the menus make a Mario Kart-esque selection noise which is serviceable. 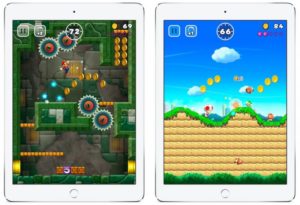 Graphically, I liked it. I was unsure of the “New” Mario games, like the ones on the Wii and Wii U, where Mario and all the characters were 3D against a 2D backdrop, it always threw me a little. I had always preferred the style of the old-school games like Super Mario World where Mario and his enemies were 2D. I still do prefer that but I was less opposed to Super Mario Runs look than I thought I would be. All the characters are well-defined and look great. The levels themselves are classic Mario in both look and design, though there are less secrets as you cannot experiment with warp pipes and the like. 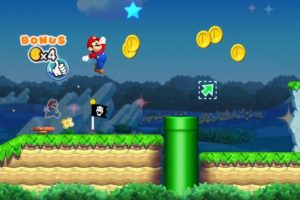 I think there in lies one of my big issues with the game, the levels are linear and Mario runs to the end, that’s it. There isn’t the opportunity to explore and discover secrets that are up in the clouds or in an obscure warp pipe somewhere. Further to that, most levels are about a minute long. Not that you’ll have the game sussed in half an hour, but it feels lacking. I understand that the target market is mobile, i.e. people who aren’t playing for extended periods of time, so short levels are welcome from that perspective, but that issue is easily resolved in long levels with checkpoints mid-level or something like that.

There are plenty of other things to do in the game, but they’re all repetitions of those initial levels. Of course there’s only so much you can expect from a mobile game but for that money for 24 minutes of levels is probably a bit steep. Especially so when some of the deals that go on now are excellent, such as getting full games like Metro: Redux for like $5. For what it is, $10 is probably too much. Though it is nice to play a mobile game that isn’t bogged down with intermittent adverts (looking at you Animation Throwdown). I guess how much you get out of it will depend on how much you want to complete the game. If you just wanted to play the game occasionally you will probably feel short-changed. For someone going for 100% this gives you plenty to work on.

I commented in my Neon Chrome review that there is probably a good game in there somewhere, but the limitations of the format (mobile) meant I didn’t enjoy it as much as I could have if it were on console. For Super Mario Run they have clearly taken notice of the potential problems mobile games can have. Though, playing with one hand, one finger even, feels…almost lazy. Tapping with just my thumb almost felt like I was doing very little and I felt less engaged with the whole thing because of it.

The whole game feels a little ‘safe’. There are a lot of things that have been added in that 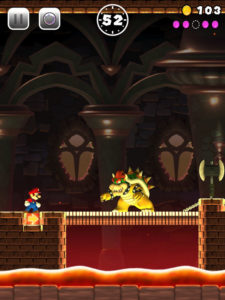 were from previous Mario titles; enemies, level design etc. The game isn’t overly taxing, difficulty wise, the challenge will come from the coin collecting. There are some flashes of cool level design (check out level 5-3), but it feels that these different style levels are the minority rather than the majority. The bosses are Bowser above the bridge, every time and he is super easy if you have had a mushroom so you can take a hit! Alternating with that, on the airships, you fight a Koopa minion, at first I thought you were fighting the Koopa kids from Mario 3 but alas it was not to be. It is the same minion with a slightly enhanced attack pattern each time you see him (three times). The final boss is pretty cool and really puts the mechanic of Super Mario Run to good use. It’s a shame that this wasn’t the case for the others, for the sake of nostalgia? Once maybe, but every other boss is just repetitious, again with a slightly enhanced threat.

Super Mario Run is a fantastic game and a great introduction for the Mario series on mobile. It is a safe game though, almost like a greatest hits of the Super Mario Bros. series. The repetitious bosses and objectives throughout the game may mean that people get bored with it quickly. The short levels on top of that make it perfect for the mobile device but Mario purists will be yearning for more. I would suggest that a lower price be considered, as much as I have enjoyed the game, it definitely does not feel like it is worth the asking price.