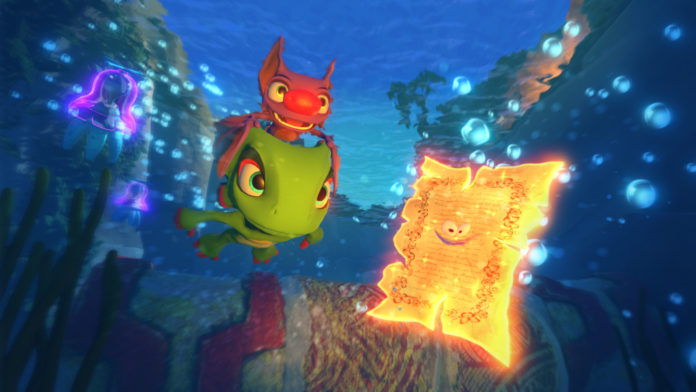 First off, it looks fantastic; the nostalgia is in full swing as a combination of Banjo-Kazooie and Donkey Kong Country are combined to make world full of character, intrigue and danger.

It looks like Yooka-Laylee is going to be spectacular when it releases on April 11th.

Okay, the bad news: Playtonic have dropped development for the upcoming game, but this is being replaced with the good news that Yooka-Laylee will be coming to the yet to be released Nintendo Switch.

Detailing the news on frequently asked questions segment of their official website they answered questions people may have about this move, including information for people on Kickstarter who backed the game for Wii U:

“Despite our best efforts and exploring every possible avenue over, we’ve unfortunately encountered unforeseen technical issues that mean it will be impossible for us to release the game on Wii U as initially planned.

We can however confirm the exciting news that we are now working very closely with Nintendo to look to bring Yooka-Laylee to the upcoming Nintendo Switch. We’re looking forward to exploring the opportunity and will have more details to share early next year.

All Wii U backers can move their pledge free-of-charge to any of the versions launching on April 11th (PS4, Xbox One, PC, Mac or Linux) or upgrade to the Nintendo Switch version when we announce further details in 2017.”

They note that anyone who backed the Wii U version on  Kickstarter will be contacted about this news shortly.

Are you looking forward to Yooka-Laylee? Are you yearning for a return to the platformers of old? Let us know in the comments below or on the RGM Forums.