There are plenty of modern sci-fi classics within gaming that have come out in recent years. Some recent classics like Mass Effect, Dead Space, and 2016’s Doom come to mind. With Dead Effect 2, it’s clear that the developers, BadFly Interactive, were inspired by each of these three games. Unfortunately, while there are plenty of quality gameplay mechanics, the game ends up faltering due to repetitive gameplay, poor voice acting, and a severe lack of polish.

Gameplay boils down simply to one typical goal:kill whatever gets in your way. How you do so depends on your desired killing utensils. Your choices are standard guns, bows, swords, and even Thor’s Mjolnir. Choose whatever works for you and then you can head into combat. Most enemy types are slowly-pacing zombies that come after you whenever you cross their path. These encounters are pretty frequent and don’t require too much inventiveness. However, once the zombie hordes start increasing in number, a bit of creativity will keep you safe. 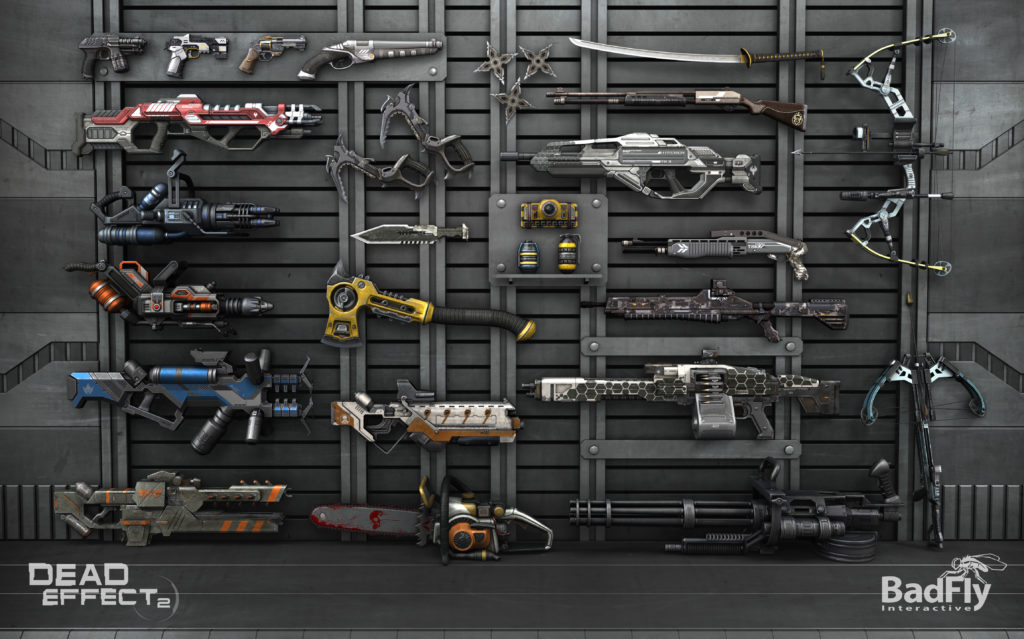 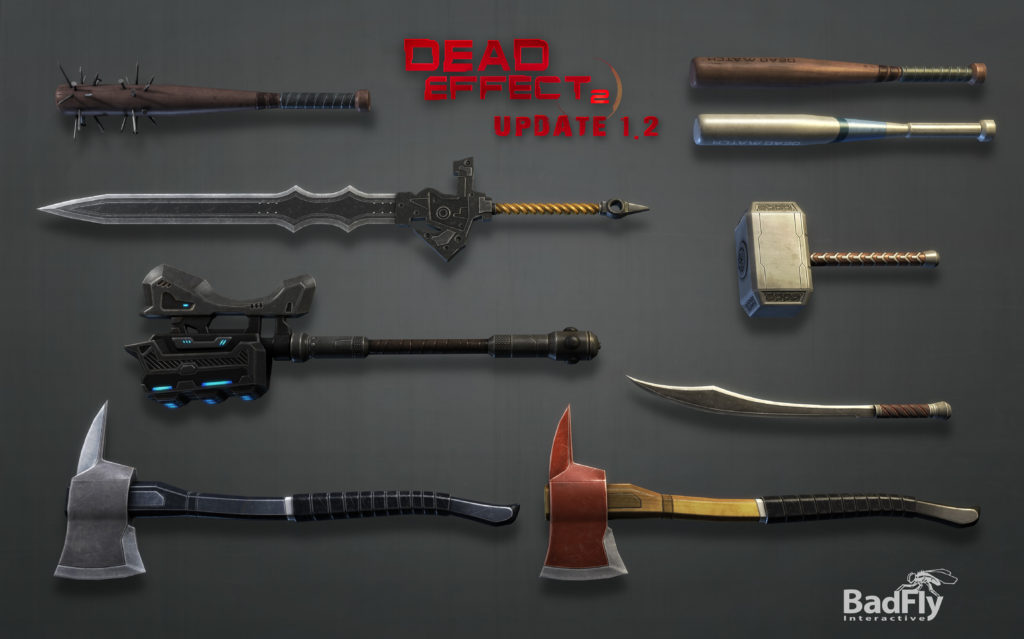 This is where the special abilities are most useful. These abilities vary quite a bit, with some including a Force-push that knocks every enemy to the ground and another that basically wipes out any standard nearby enemy, turning them into a bloody hunk of organs. These help provide the most satisfying moments as these abilities offer up both visual variety and a true representation of the upgrades you’ve been equipping throughout the campaign.

The upgrade system present within the weapon and ability systems is a quality highlight of Dead Effect 2‘s gameplay mechanics. The ability to upgrade each of your weapons or purchase better ones through the in-game store is much appreciated as it allowed me to switch between weapon types easily. When my initial sword/bow combination didn’t work as effectively as expected, I was able to swap the bow for a powerful gun I had received during one of the story missions. I was then able to handle the increasingly difficult enemy encounters thanks to this simple switch.

The amount of choice present within the game was another major highlight as there was always a way to alter how you play the missions. The game starts with you choosing one of three character types: a gunner, a female gunner, and a swordsman. Each of them has their own standard weapon and ability set, allowing players to choose their character based on whichever character fits your play style. This, combined with the loot system in which you upgrade your shield and health, provides plenty of options for players to consider as they level up and progress through the story.

There’s also plenty of game options to be played with multiple modes open to players. There is story mode, the generic (yes, that’s what they’re called) missions, Infestation, Lone Wolf, Biohazard, and Survival mode. Infestation was my favorite of the bunch as it involved wiping out hordes of zombies in whatever way worked for you and it offered up some fun moments. 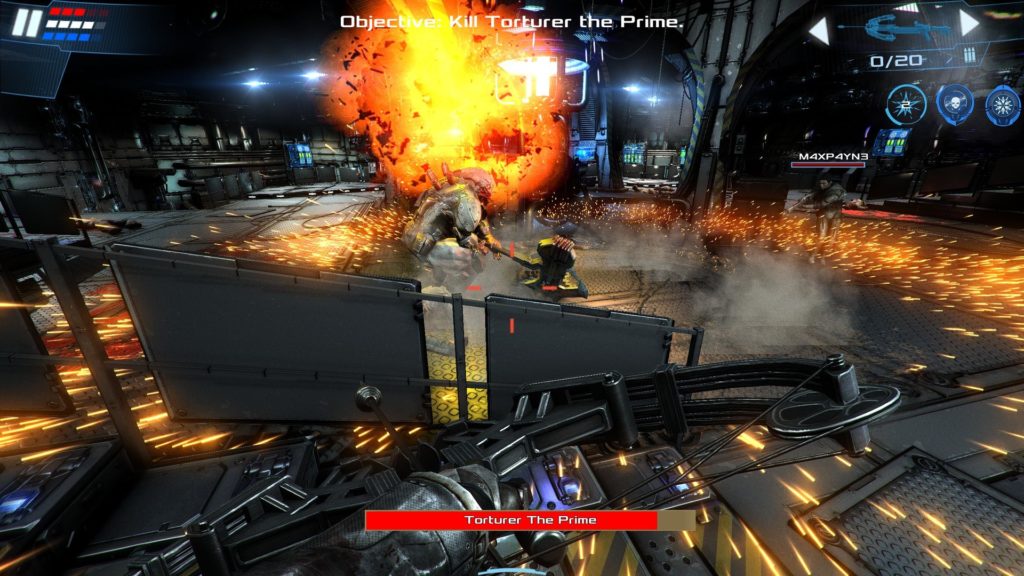 With all that being said, the gameplay is severely lacking in several areas: gameplay flow, enemy A.I, and variety in mission types. Although the end goal of the missions aren’t repeated, the manner in which the missions play out feels far too similar. The gameplay never truly evolves to a greater level of enjoyment or thrills, forcing the boss battles to be the saving grace of certain levels. Unfortunately, the boss battles are held back by technical issues in which they do roughly the same attacks repeatedly until they’re beaten. A number of these boss battles could’ve been something special, but due to some technical hiccups at multiple points during my playthrough, the boss battles were less of a saving grace and more wasted potential.

This wasted potential is due in large part to Dead Effect 2‘s lackluster enemy A.I. Zombies do the same striking attacks and the human gunmen shoot at you while disregarding covering at numerous points during combat encounters. The worst example of it is when they’d flat-out disregard my presence, allowing me to take them out with ease. This was a regular occurrence with the human enemies, breaking up my immersion far too often.

Overall, gameplay had plenty of depth and interesting choices before the missions began, but once they DID begin, the strongly repetitive gameplay brought my experience down substantially. 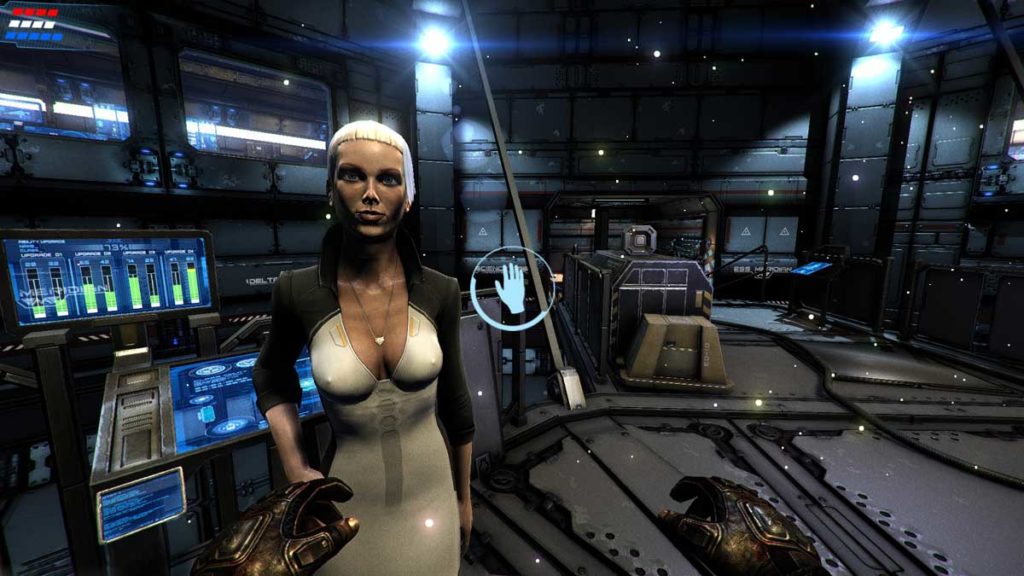 The story involves your character waking up on the ESS Meridian space station to find that many of its former inhabitants have become zombified and are on the hunt for anyone who still considers themselves human. It’s up to you and your fellow acquaintances Danette, Minikin, and Dr. Bielik to discover the Meridian’s many secrets and conquer the evil that is plaguing it.

The opening cinematic for the game teases an intriguing zombie tale, but Dead Effect 2 never quite reaches the level of intrigue that was teased in the opening. Much of the story is told through the characters and while much of it does sound interesting, the story never digs too far below the surface level of the main plot. Very intriguing plot points end up getting ignored in favor of more standard story focuses, leaving the story to feel more generic than it should.

The characters also fall victim to this treatment as they’re not as explored as they should’ve been. Danette, Minikin, and even your own character have very interesting backgrounds, but they’re rarely examined in any significant way. To sum it up, the story holds promise and will go on for 10+ hours, but never quite reaches that interesting story below the surface. 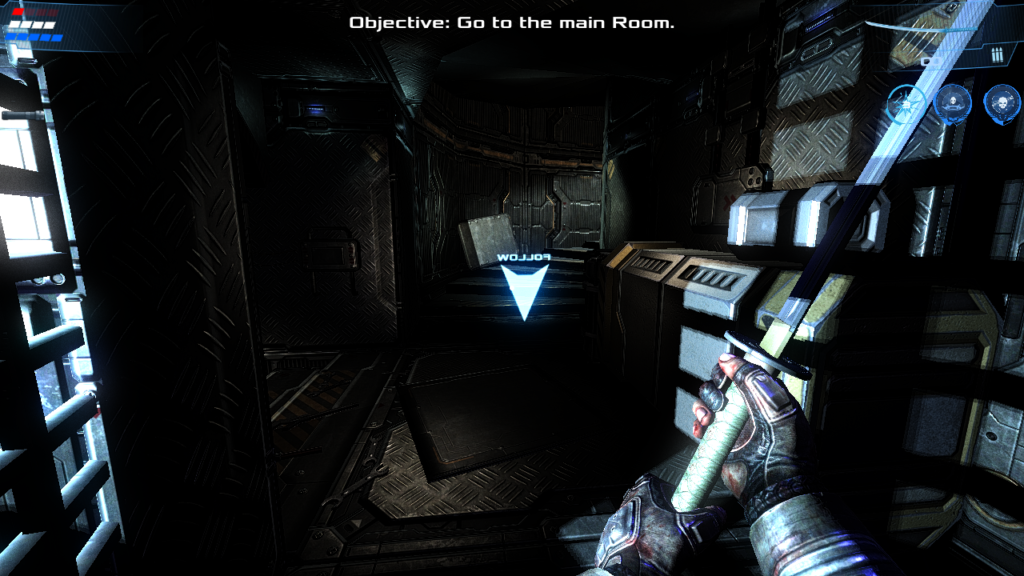 In terms of visual aesthetic, Dead Effect 2 finds itself stuck somewhere in the middle. Although there are numerous detailed zombies and environments, the majority of them are largely undetailed. There was also this odd visual sensation where every single physical part of the environment had a fuzzy aesthetic to it. Regardless of the surface type, you could be certain that it’ll have that same visual quirk.

This inconsistency led to the less-appealing sections looking worse than they would’ve had everything looked the same graphically. One major example of poor visuals standing out significantly was when a spitting enemy would shoot a red liquid at you, it was just red with no detail whatsoever. It became extremely distracting whenever the enemy would appear as he’d attack and I’d become focused on the completely-plain liquid that looked less like poison and more like paint. The character models were also hit-or-miss. Characters like Minikin have a good amount of overall detail, but then characters like Danette lacked detail in their face, leading to mostly static facial expressions.

That being said, there were some quality visuals and detail, especially when enemies would explode and you’d see the insides of the zombies appear in relatively impressive detail, reminiscent of the Bloody Mess perk in Fallout. The automatic slow-mo that would trigger upon each explosion wasn’t always preferred, but it did allow me to better appreciate some screenshot-worthy moments during combat.

Overall, the visuals were largely inconsistent, leading to a largely uneven experience on the visual spectrum. 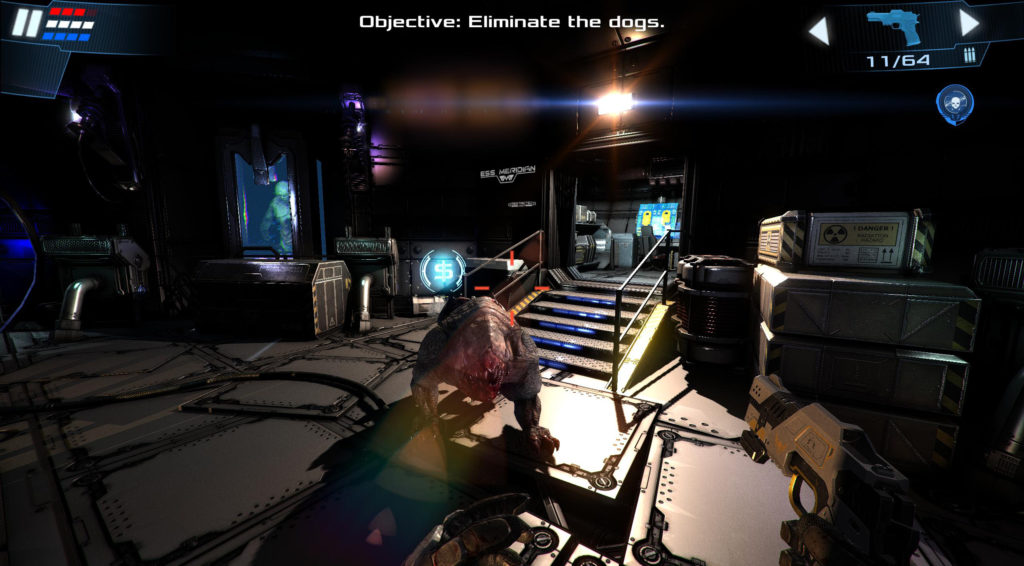 This ends up being where DE2 falters the most. Disappointly, almost all of the music was largely forgettable with the music in the opening cinematic being the only somewhat enjoyable theme throughout the game. None of the background music made its presence felt in any noteworthy way.

The voice acting presented here is mostly poor with Danette’s monotone voiceover being the only decent performance. The male protagonist has Duke Nukem-style one-liners, but the voice provided never hits them with conviction. This leads to one-liners that become more cringe-inducing than badass. Minikin’s voice is understandably odd, but he too got annoying as he spoke more and more.

Finally, there’s Dr. Bielik. Out of all the performances, his voice was the one that became incredibly annoying. He has that stereotypical Russian accent, but his voice jumps between high and lower-pitched so frequently that it was frequently difficult to ever focus on what was actually being said. Although the other voices weren’t great, it’s Bielik’s dialogue that truly dragged this grade down tremendously as it became very challenging just to sit and listen to what he had to say. 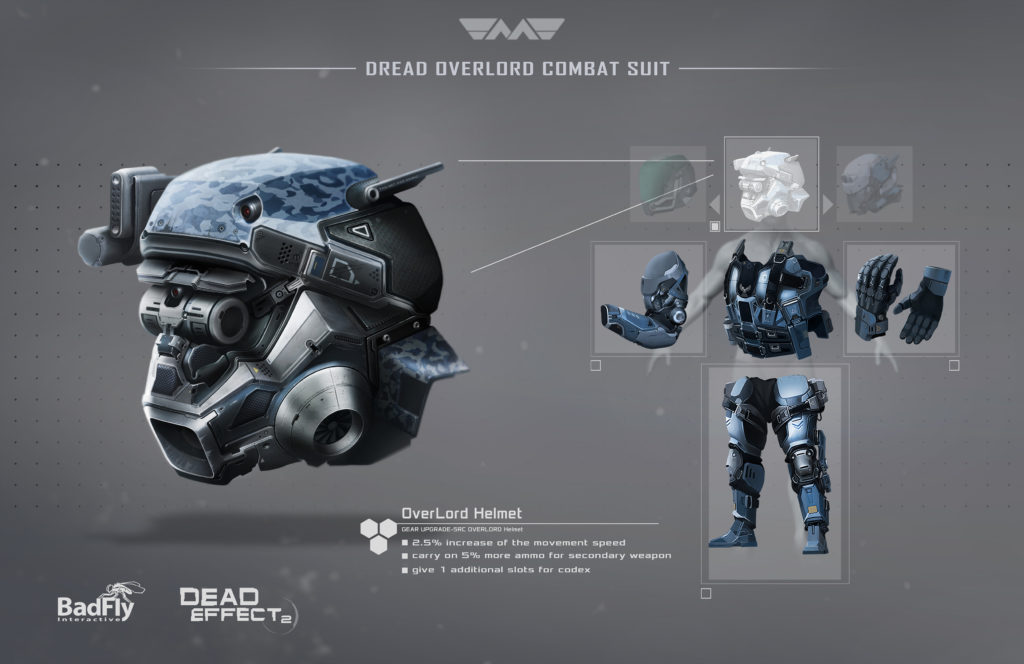 DE2‘s replay value is another tricky aspect to definitively nail down. On one hand, the healthy amount of choices promote replaying the campaign multiple times. On another hand, the overall gameplay experience is largely inconsistent in its enjoyment, which hurts that desire to play again substantially. There are plenty of opportunities to try new things in combat with repeated playthroughs, so the replayability is certainly present. However, due to the middling experience I had with the game, this will likely be a one-time journey.