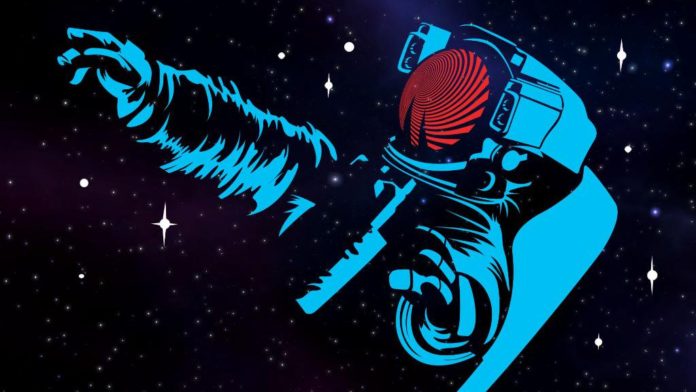 Physics-based puzzle games have been popular for years now. From Angry Birds to the Incredible Machines, players have been enjoying them on many type of devices: PC, mobile devices, consoles, etc. Touch-based devices or PC were usually preferred though because of the control scheme needed for this kind of entertainment: manipulating objects and obstacles is just easier to move around with a mouse or directly with your finger. It didn’t stop some developers trying it on regular consoles where you’d have to play them with a controller. 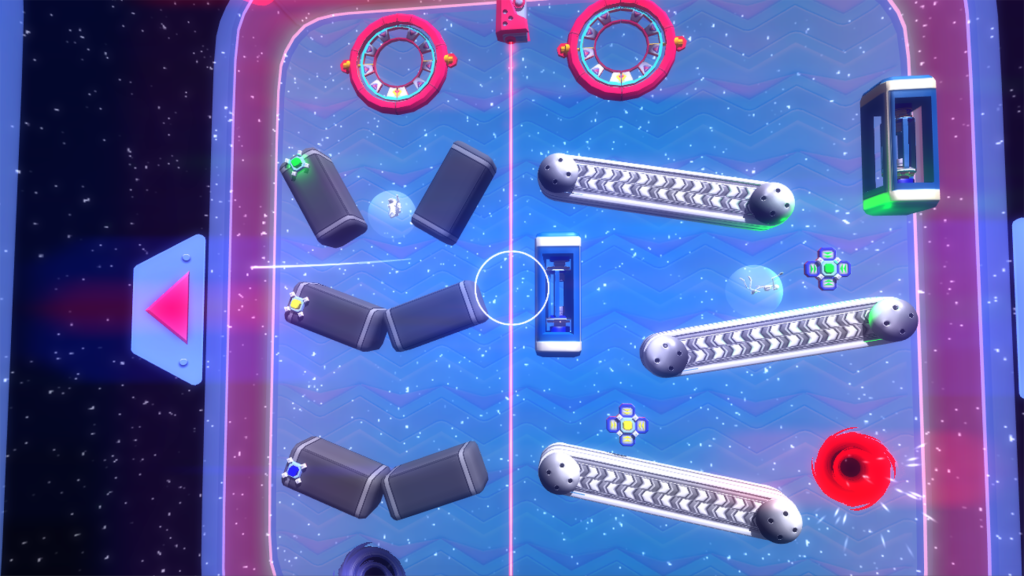 Namazu Studios is one of those studios and they created Nebulous, a game located in space where you must help Commander Dash Johnson to return to his ship. During a space walk, he accidentally went into a wormhole and teleported far from his vessel.  The player must guide his fall by making him go through paths that you built, navigating from portal to portal so he can return to his crew.

Other than that, there is no real story in this game, which is not abnormal for a puzzle game. One particular aspect of this one though is that it is very funny to guide the commander.  He is a real arrogant person full of himself and blames his crew for what is happening to him. Each time you fail in a puzzle, he just starts making fun of you and insulting you, similar to the way GLaDOS does it in the Portal games. It is full of puns and the effort is definitely there to try making the trials/errors process less tedious. There is unfortunately no real pay-off for a success, and nothing gets developed on this front. So it basically becomes a variation of an Angry Birds game, with a pride of just trying to get 3 stars on each level.

Like I previously stated, the objective of each level is to go from a departure portal and bring the Commander to the ending wormhole. Each level has anywhere from one to 5 sections, and you build paths using obstacles and mechanisms like walls (straight, with angles, round, etc.), escalators, gravitational centers, trampolines and so on. Each of those allows a special kind of traveling path for the player. To collect the stars on each level, your performance is evaluated on 3 things: speed to reach the end; the amount of retries you take and collecting stars that are spread in the levels. If you’re playing the game on PlayStation 4 or PC, you even have the ability to play the game in VR, using PSVR or Oculus Rift. I played the game on Xbox One, so I cannot tell you how these methods of gameplay work. 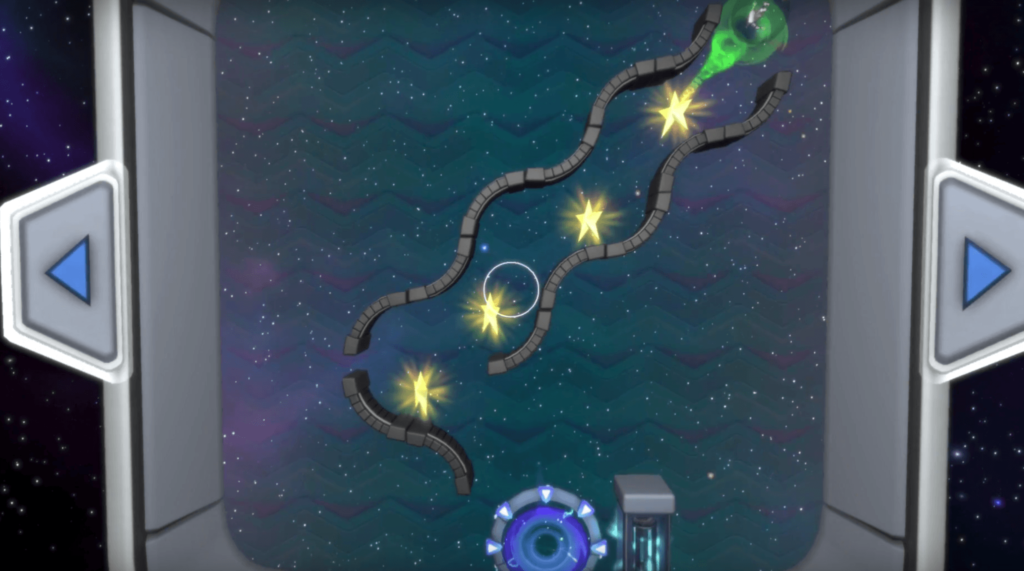 Playing this game can become really frustrating using a normal controller. You want to go as fast as possible to try to get all stars, and the precision of moving the pieces using the analog sticks is really imprecise. When there are a lot of obstacles, there are also a lot of collision problems, sometimes your manipulated object follows an obstacle, sometimes it’ll just going through it, then bringing it back becomes cumbersome and makes you lose a lot of precious time. There were definitely moments where I was missing the option to play the game with a mouse.

Another issue I had with the gameplay is the fact that in my opinion, if you play a physics-based puzzle game, the objective is learning each mechanism and how it works, so you can visualize how the physics of the obstacle can be used, and you build the path following your observations. I have had many instances though where I had to backtrack in my process, because the physics just started to behave differently, after many retries. Each level where it happened to me though, as frustrating as it was, I was able to overcome this unnecessary hurdle. 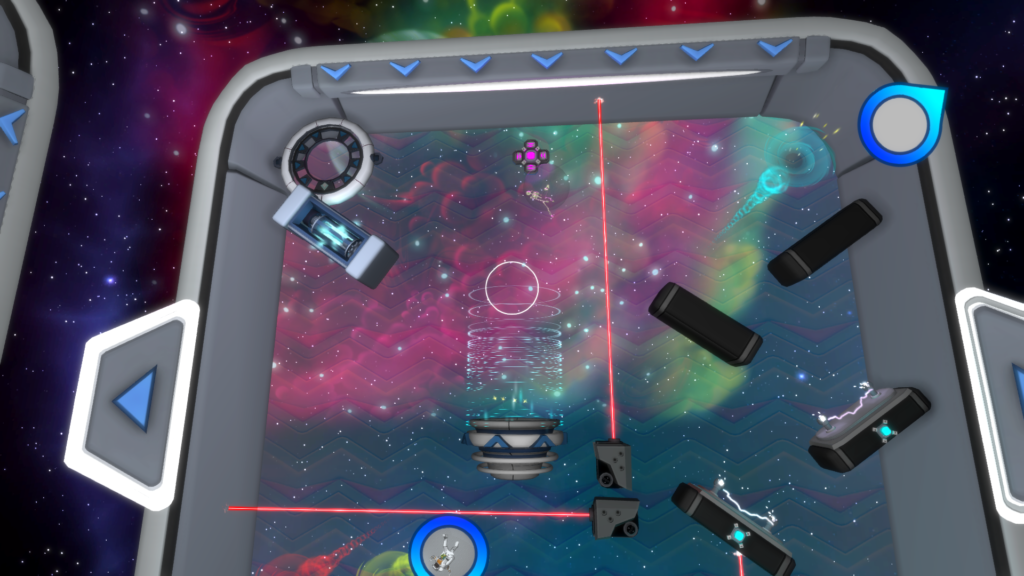 In terms of presentation, I cannot say that the game is ugly, but it is not pretty either. It has the level of quality you can expect from a mobile game: minimalist, not a lot of details, but it does the job. In terms of sound effects and music, it is pretty atmospheric but very forgettable. The only thing that made me keep the sound on is hearing the Commander throwing insults at you, instead of playing with no sound and having subtitles on. The level of voice acting was very good in this regard.

There are 40 levels in Nebulous. If you are an achievements hunter, it consists of just collecting the 120 stars of the game (40 levels * 3 stars). There is only one additional achievement: hearing all the insults the Commander can give you. It must be a grind to do it, because according to PSNProfiles, the trophy is ultra rare. It could also be because there are very few people that played the game, and even less than obtained it. The only thing I can say is that I was unable to obtain it. 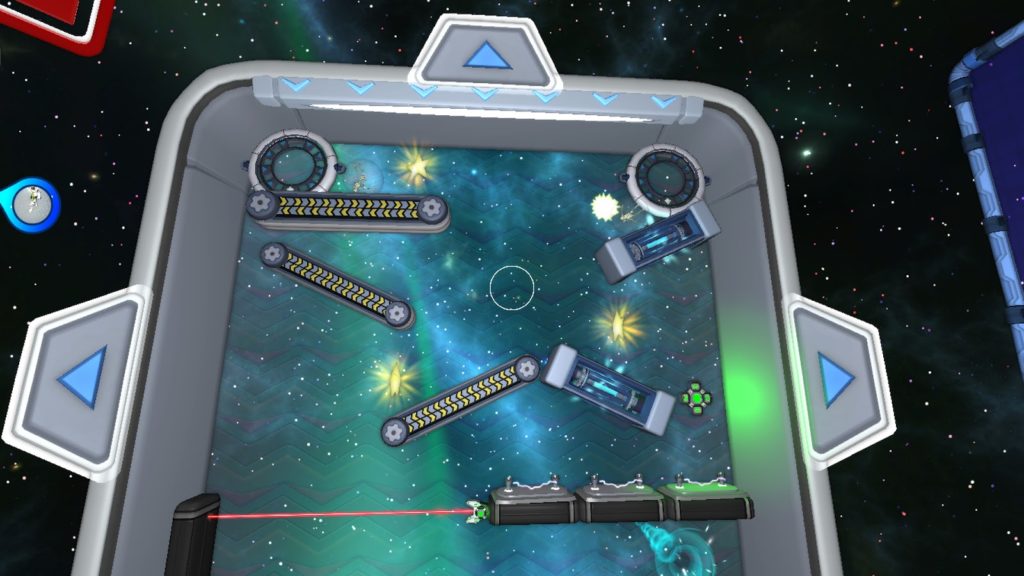 Nebulous is a fun indie game that you can spend a lot of hours in if you’re into this kind of puzzle game. If you’re a type of player that plays to get all the stars before advancing, I don’t think it’s really replayable afterwards. If you’re more in the category of “finishing it first, then completing the challenges”, the game can be very replayable, but I have to warn each and every one of you: it is VERY difficult.  Some of the stars are frustratingly hard to get. Like I also said previously, the combination of control schemes and collision detection problems can make things really difficult. You can get a really good sense of satisfaction once you succeed to overcome everything. I recommend this game only to the puzzle game lovers and the very patient.