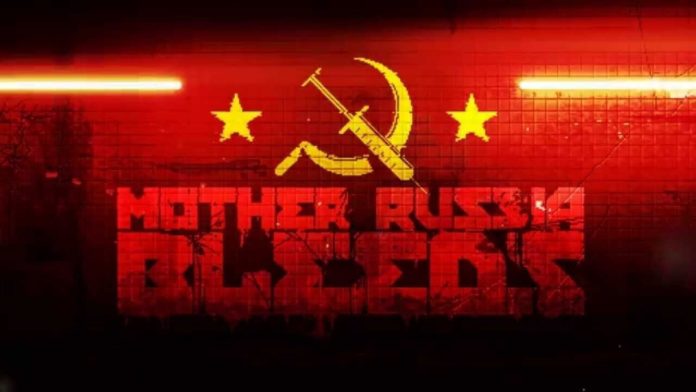 Mother Russia Bleeds aims to be a side scrolling beat ’em up that is grown up enough for the generation that has the best memories of the genre’s heyday. However, sometimes it fails to connect the dots. Get ready for some super violence though! 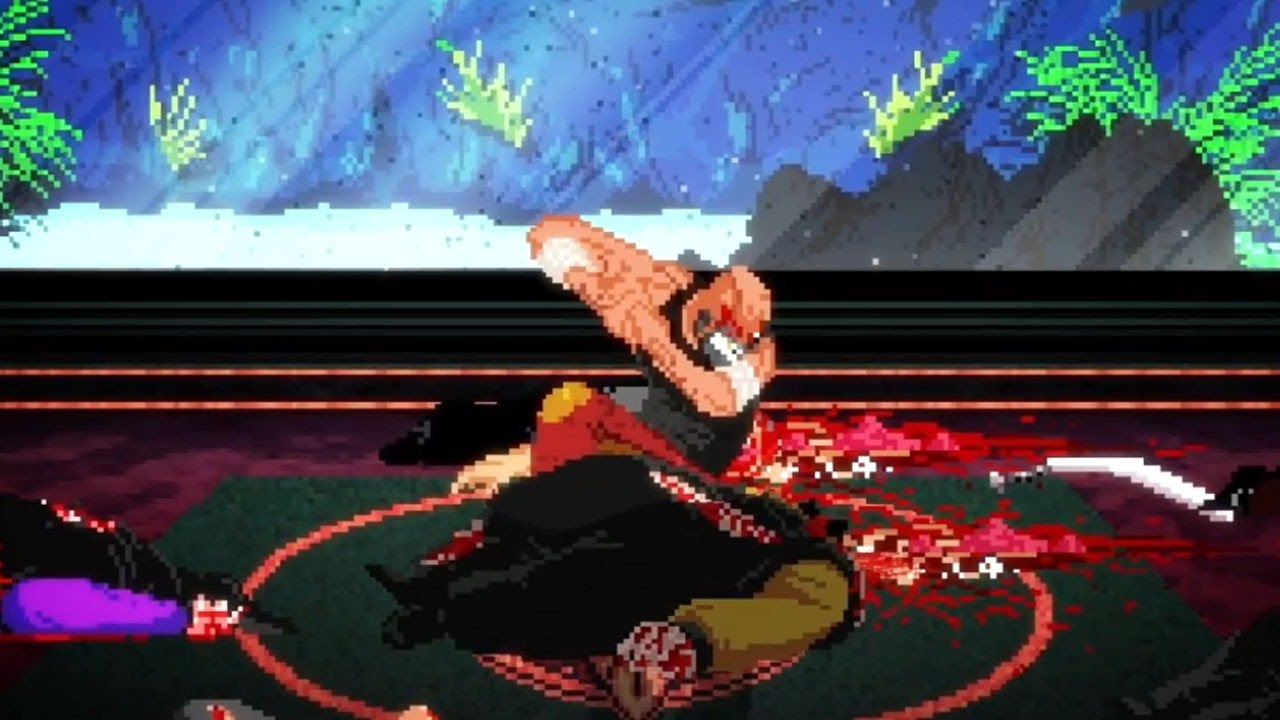 Mother Russia Bleeds has been out for a while, but I’ve only just managed to finish it, thanks  to an extensive and stressful holiday period. I played it on the PS4, though it had been available on Steam for three months previously.

It’s a classic 16-bit arcade-style beat ’em up, drawing many similarities to the best of the best such as Double Dragon and Streets of Rage. However, there are many occasions in which Mother Russia Bleeds seems to try a little too hard. 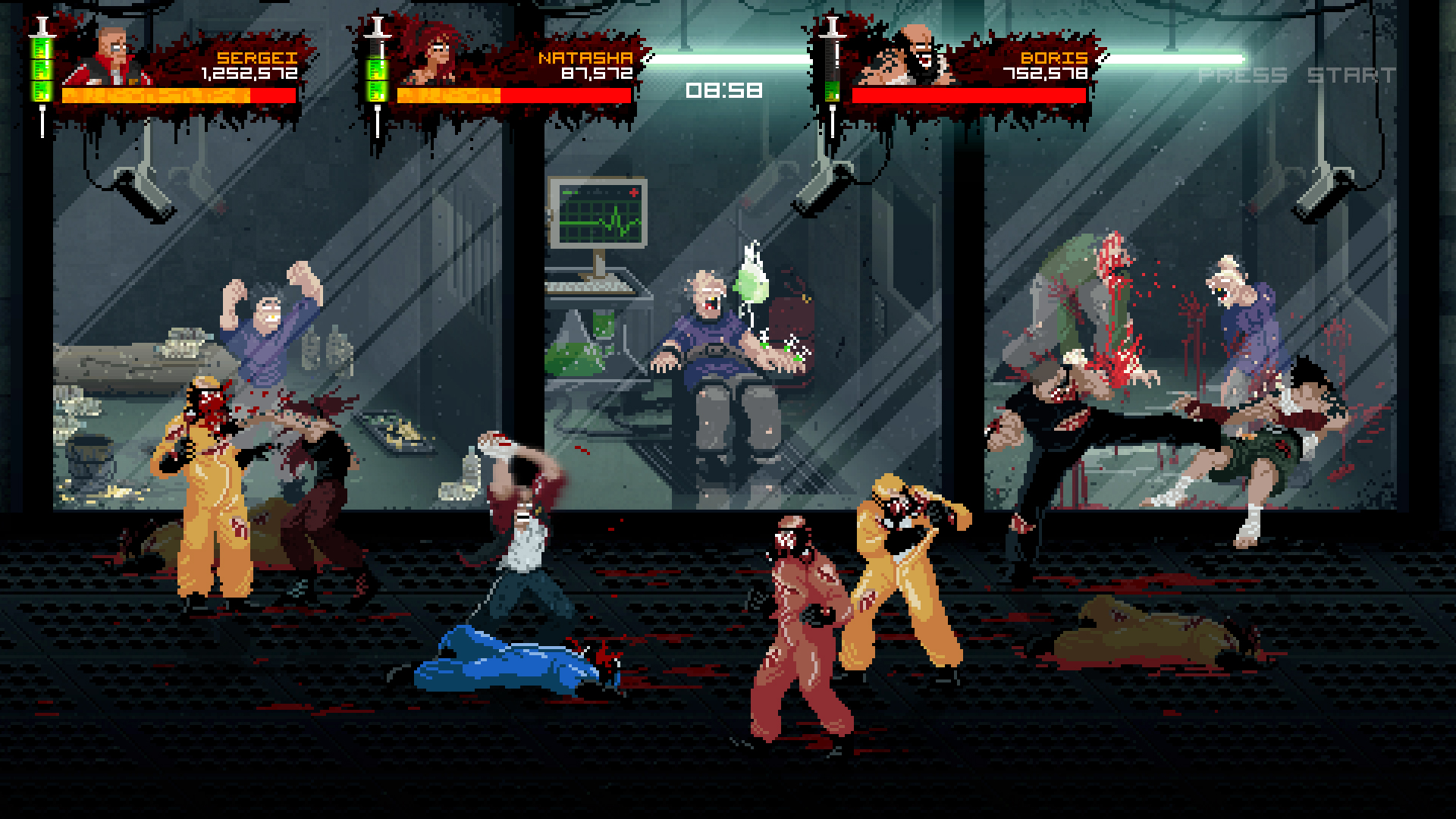 You can play alone, or with up to three comrades in local multiplayer, and right off, I rolled my eyes at the cliches. The four characters each have different skill levels in speed, power, jump and rage, though these really don’t seem to make a lot of difference when you play. There is also a big emphasis on the characters’ personalities in the loading screens, but whoever you choose to play as will have the same dialogue. This seems like a really missed opportunity, as you have the badass chick, the tank, the hot-headed leader and the crazy one. I played with my husband, and he chose the crazy Boris as his character. As he was Player 1, the dialogue was through Boris. He didn’t exactly come across as he was described. I played as the hot-headed Sergei, but constantly felt as though it really wouldn’t matter if I had picked someone else. Also, another missed opportunity was that once you begin playing, you cannot change character when you die, as in many other side-scrolling beat ’em up’s like Streets of Rage or Golden Axe. Not that you need to, as every character seems to play the same, but the option would be nice seeing as the game gets somewhat repetitive.

The levels are a great length, and look pretty darn cool. There’s a simple enough background, but they’re all well designed. Not that you’d be looking very often at them. You can get a heck of a lot of enemies on the screen at one time, which makes for frantic and fun play, even if it can be rather frustrating at times. The depth perception and hit boxes for buttons feel really off sometimes, a far cry from the games Mother Russia Bleeds has aspired to. We played on Normal difficulty, and were never once bored. At first, Friendly Fire was on, but we had turned it off by Level 3 when Chris found out knives kill in one hit. If this sort of gameplay is your bag, go for it. However, my husband and I are both very competitive, and struggle to work together to great effect in beat ’em ups… there was a lot of swearing.

As the levels continue, the gameplay doesn’t advance at all. The enemies get harder, and the boss battles are classic nuts, but there are no real set pieces, or new ways to perform combos. Combos can be really hard to pull off, thanks to the aforementioned depth issues, and you find yourself mashing buttons in order to advance. Another issue we found was in the health system. You have to take time to pick up health via syringe from certain fallen enemies, and other enemies will not give a damn. They will hit you hard, and if you haven’t filled a portion of the syringe, you have to start again. These fallen enemies will only be useful for a short time, so if you miss it, that’s it. There’s also no way to tell which ones will give you the drug, and it can be really awkward. Similarly, if your comrade falls, you can use some of your drug to revive them. If you don’t have any, it will take a portion of your health. This is not recommended if there are many enemies left on screen. Your friend will revive with only a little bit of health, and leaves them vulnerable, especially in boss battles, where the hits do so much more damage. However, this leaves you on your own to try and survive. The good news is that the checkpoint system is very forgiving, and you spawn with full health and full syringe.

Weapons range from standard to inventive, and feel very satisfying on the whole, though the guns seem to be a step back. They’re unnecessary, and annoyingly overpowered, much like in real life. Overall, when you get used to the flaws, the gameplay is fun, and easily quenches the thirst for non-stop limb-throwing action. 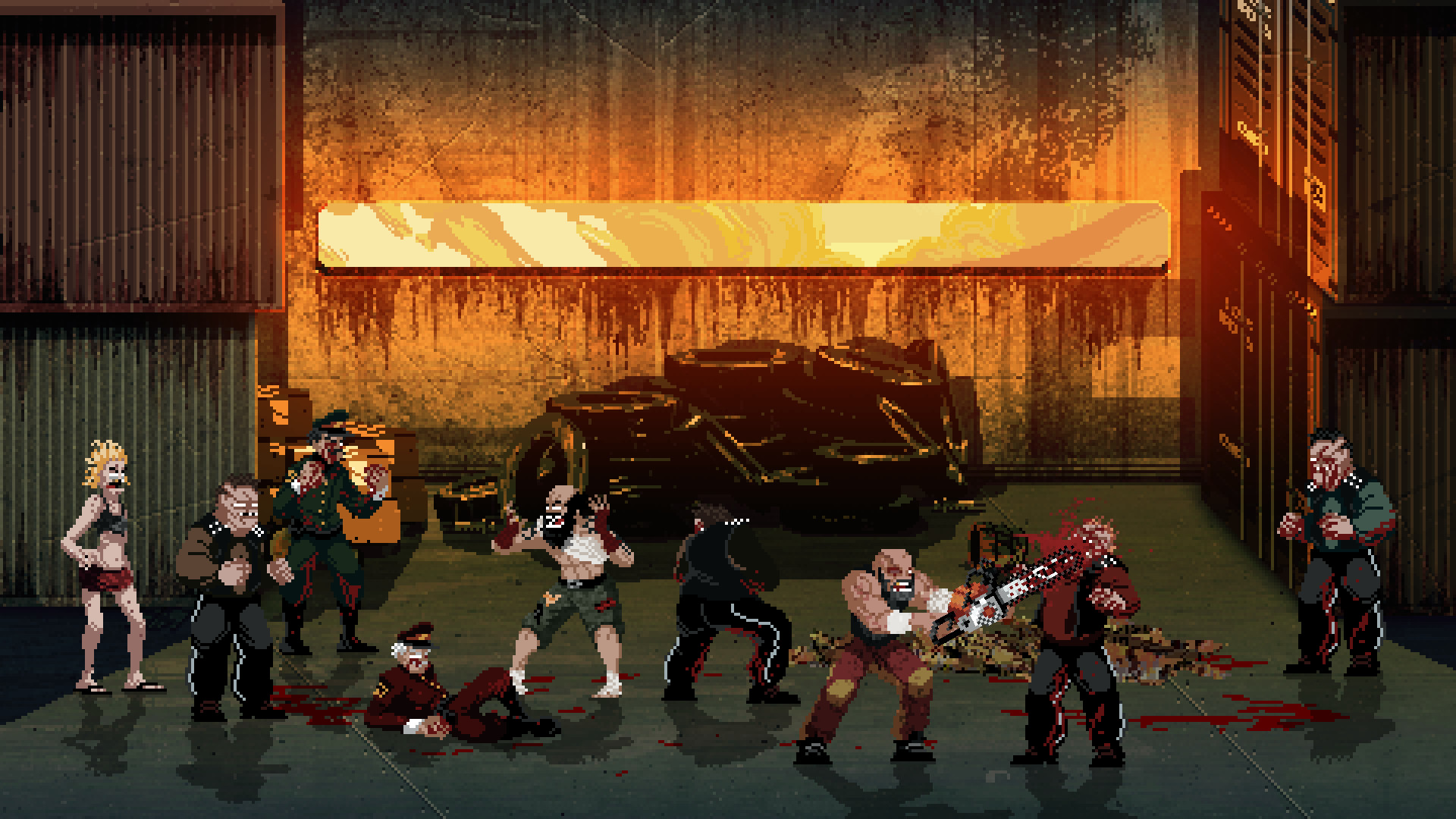 The story is fairly non-existent, as in most arcade beat ’em ups. In an alternate Soviet Russia in the 1980s, you are part of a rag tag bunch of street fighters who are kidnapped by the mafia and forced to become addicted to the drug “Nekro”. As the characters battle odd hallucinations and other rivals also taken over by the drug, they try to find out the links between the mafia and the authorities, and ultimately government, thanks to the influence of Nekro. It’s a timeless cult movie dystopia storyline, as was the trend in the beat ’em up genre too, and it makes sense. As you are trawling through the levels, literally beating people to death, sometimes draining substances from them in order to inject yourself with them, the chances are that the character you play as is not a very nice person before any of this even happened. You are an anti-hero, and to set the game somewhere like 80s Soviet Russia could only lead to this sort of story. However, it feels nothing less than farcical throughout. If there’s there’s any real serious message, it’s far too subtle, and the thrill of smashing goons into a pulp on the ground is too much like escapist fun to think about that. It would really end up making the experience far more harrowing. Maybe with less of an emphasis on the dystopian action cheese and violence, I would have wanted to listen and think more about it.

The script isn’t fantastic, and many of the characters have an odd way of talking, as though they’re in a terrible American b-movie. It contrasts against the other typical Soviet Russia tropes that are in the game, and makes it feel as though it could almost be set in 80s New York, when the city was struggling with crime, corruption and drugs of its own.

The art style is great, and interesting to look at all the time. Sure, the enemies repeat themselves, as with beat ’em ups of old, but there are always interesting attributes – such as hairstyles, tattoos and clothing. The colours work well together, and the expressions on the characters faces add to the tongue-in-cheek feel to the whole thing.

The music is catchy and fitting. It’s less cool and groovy than Streets of Rage (though nothing will EVER top the music in those games), but it adds to the urgency and hell-for-leather action. There isn’t much in the way of other sound effects, though they do work well. There are distinctive noises for weapons and environmental destruction, and they also make reference to beat ’em ups of the 16-bit era. 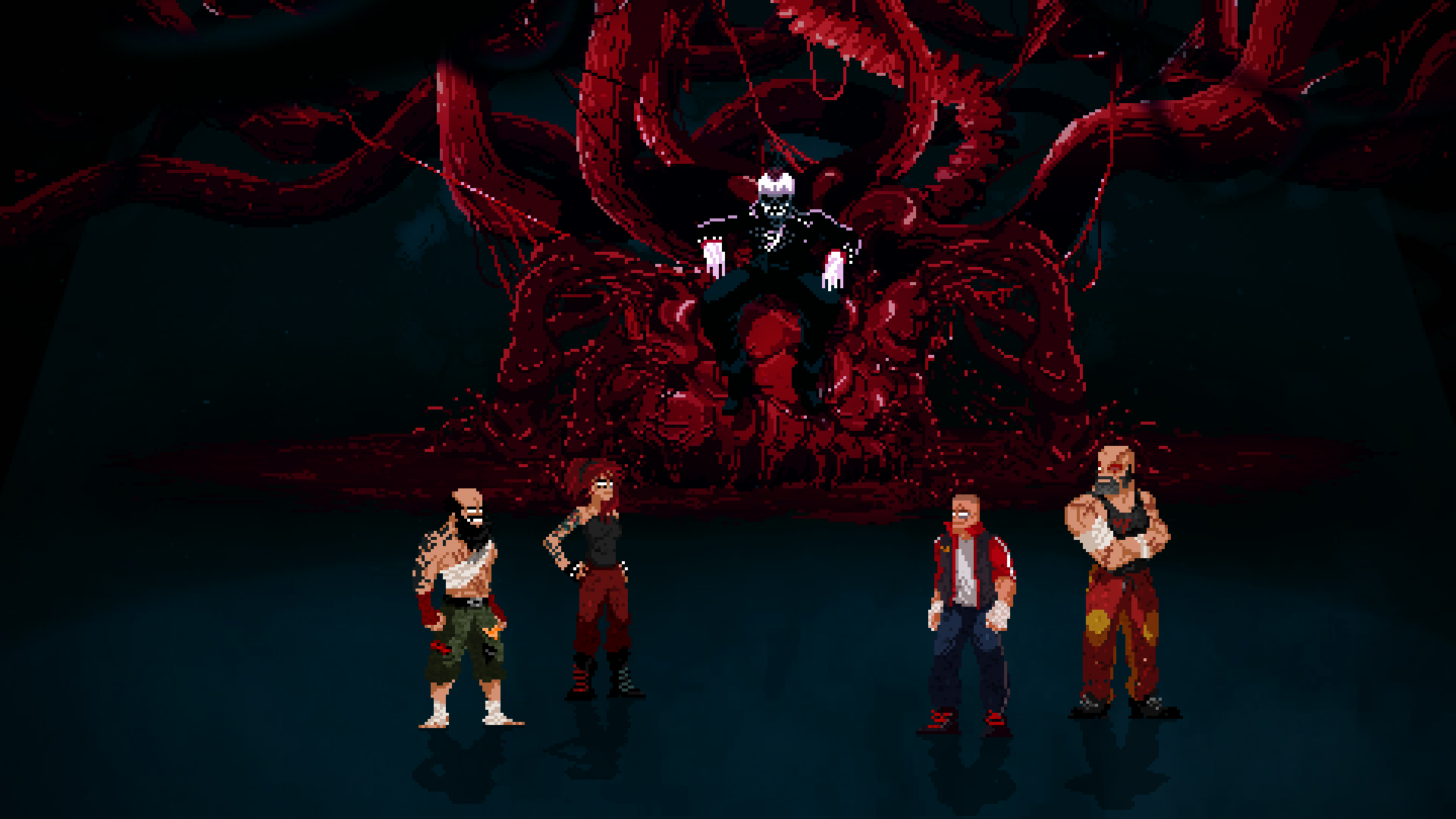 There are ways to go back and play the game differently, in that you can change characters and difficulty, but there are no collectibles, or unlockable features. However, there is an Arena Mode, if you want to button bash like there’s no tomorrow.

Mother Russia Bleeds is hard to discuss in a simple way. There is so much gratuitous violence and other adult themes, that it should be mindless, but it’s not. There are questions raised in the dialogue that mirror much of society, from drug addiction to revolution against governments. I spent my time trying not to think about it, which rather took away from both the enjoyment and the message. The developers would have done well to either dive deeper into the story or abandon it altogether.