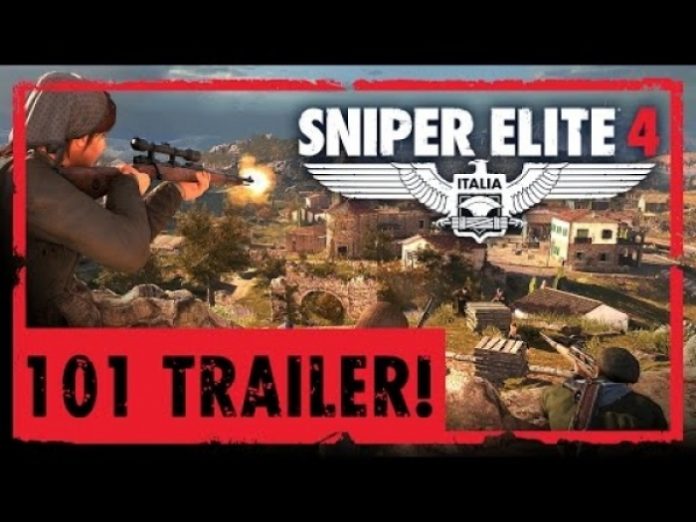 Some games like to tease with their trailers. Others like to tantalize. Some – let’s face it – lie through their teeth at you. But if there’s one thing I can say about the gameplay trailer for Sniper Elite 4, it’s that it is mind blowing in pretty much every sense of the saying.

This trailer goes into the details of the games campaign, combat, enemies, weapons and the multiplayer – and all of it looks absolutely brilliant. The bullet-time damage that has become a staple of the series, the open world style maps that let you go about the business of killing Nazi’s in your own way and the dedicated 2 player co-op which will see you and a friend team up to get the job done. The blurb from the official website gives the following details on the game:

“Covert agent and elite marksman Karl Fairburne must fight alongside the brave men and women of the Italian Resistance to help free their country from the yoke of Fascism, and defeat a terrifying new threat with the potential to halt the Allied fightback in Europe before it’s even begun.

“If his mission fails, there will be no Operation Overlord, no D-Day landings, and no Victory in Europe.”

Sniper Elite 4 is out on PC, PlayStation 4 and Xbox One on February 14th, 2017 – so what better way to celebrate Valentines Day than by shooting up a load of Nazis in Italia? Also if you pre-order you will also get the Campaign DLC “Target: Führer” as well as the Weapons DLC “Camouflage Rifles Skin Pack“.

Are you looking forward to legitimately camping in Sniper Elite 4? What about getting those infamous nut-shots? Let us know in the comments below, the RGM Forums or on Twitter. If you like what you’ve read then feel free to share this article on Facebook, Twitter, Google+, Pintrest or Reddit using the buttons available!