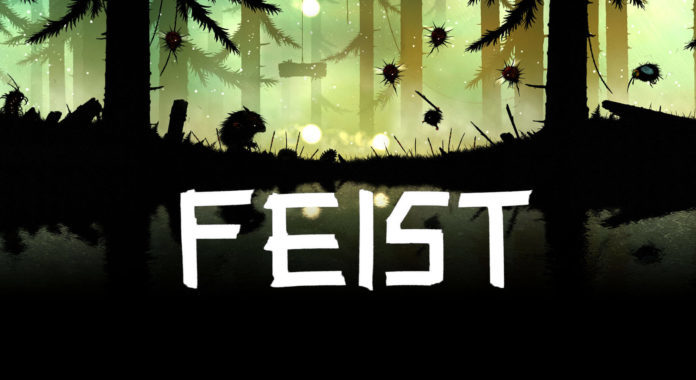 Feist is a difficult game, masochistically so in places.

Don’t get me wrong, I like a challenge. I appreciate a difficult game, something that makes you grip your controller as blood shoots from your ears. Those that give you a sense of pleasure when you finally get past that difficult bit after the 100th time. Games that are difficult need to be fair. It should be the inability of the player rather than the game just being difficult that makes a game challenging. Poor design or limitations of a title should not be excusable as “maybe you just find it too difficult”.

I guess when you think of a ‘difficult’ title/series, From Software’s Dark Souls is probably up there as some of the most difficult ones. To be honest, even though I haven’t put a whole lot of time into Dark Souls I have enjoyed what I’ve played. Despite its difficulty, it rarely felt like the difficulty came from the game being ‘unfair’. Don’t get me wrong, I like the challenge and although frustrating at times, I kept going back to it, giving it another try. I get the impression that Feist was trying to emulate that mindset with its 2D, single player, side scrolling adventure title. On some levels, it succeeds entirely and on others it is just tedious.

If I had to describe Feist I would call it a cross between Limbo and Dark Souls. That alone should be enough to hook your interest and rightly so. Feist is a desperate, savage survival experience. Seemingly abandoned by your elders, you play as a young hairy beast character following your fellow strange beasts through lonely forests, hazardous mountains, dark caves, and glowing swamps. Though this is no stroll, you have to watch out for dangerous creatures that react to your movements and decisions, and cleverly concealed traps that will test your ability to survive.

From the off, Feist is a delight to look at. It combines the mono-coloured character frames and scenery (as in Limbo) with an environment that manages to exude a delightful ambience. This is in spite of its simplicity. The colours work exceedingly well as a backdrop to the black foreground. The only colors are that of the eyes of the enemies or yourself as you fight for your survival. If you have watched the video above you will see what I mean, it is marvellous to look at. The way that spores float in the air as you work your way through was something I particularly noticed. It reminded me of snow and I love snow. The environment often reacts to your character too, which is something I always appreciate.

The music in the game is often kept to a minimum, the sounds effects are atmospheric and work really well. When you throw objects or break an item they often land with a satisfying sound. Some of the enemies strike fear into your soul with the sounds they make as you realise you have to face them. You can tell that developers Finji have put a lot of time and effort into presenting this game in an amazing way. It has reportedly taken them six years to create Feist and the efforts, certainly in the visual department, show. 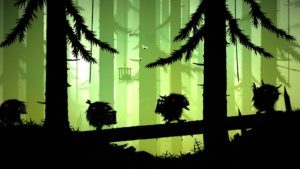 My biggest gripe with Feist, however is with how the game plays. Despite what seems to be every moron on the internet’s opinion, graphics don’t make a good game. You need to have a balance and if your gameplay sucks or the AI is bad, for example, then all the pixels and resolution in the world can’t save you. As I alluded to at the start, there’s nothing wrong with a difficult game, but there seems to be something just a little unforgiving about Feist‘s difficulty.

In the beginning, it’s quite gentle, in fact there’s hardly any enemies at all. On occasion there is something you need to dodge, an environmental trap; a trip wire with deadly consequences. You’ll encounter a troll/beast looking guy and you need to figure out if you want to fight or run away (both are viable options). As you progress new enemies are introduced and add new tactics and style to the game, I think. It felt at times as though I wasn’t sure if what I was doing was right.

I was dying so often and with such consistency I started to feel as though my methods were flawed. Although, there was no apparent alternative method to get me through the area. I recall one level (special mention for the graphics here, wow) where you encounter a run of three or four angry flying wasp type enemies and they fire stingers at you. You have the ability to throw various objects at these winged demons and then take hold of one, under your control, whilst it is stunned (easier said than done, trust me). From there you can use your new-found (and unwilling) ally to take down the remaining enemies. 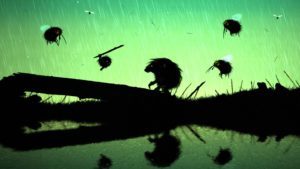 Sounds like a fun mechanic, right? Well I tell you what, I have never swore so much at animated flying creatures in my life. The way they dodged and moved was like they were anticipating my moves before I had decided what they were. Sometimes I got them straight away and other times I spent five minutes jumping, dodging, firing and running like I didn’t know what I was doing, before ultimately dying anyway. After dying some more I felt like maybe I should be just running past, it worked previously. NO! Stop there, unless you are the incarnate of Overwatch’s Genji, I fail to see how you are doing it.

It may be possible, but I gave up trying and eventually got past, but by this point I wasn’t enjoying it. In fact, it got to the point where it felt tedious to carry on, I yearned to play something else, which I wasn’t overly happy about. I loved the look of the game and enjoyed the beginning levels but it became ridiculous. I’ve played games like Ikaruga and know how difficult games can be. Feist didn’t feel fair, it felt stacked against me. Especially when I didn’t know how much health I had!

You can take about four hits before you explode into a puff of fur. You can collect fireflies that float around the level to restore your health. The problem is that there is no way to know how much health you have, there is no apparent indicator. I was trying my best to see if there was a subtle nuance or something I was missing. If there was one, I couldn’t see it. Further to that, the controls were not the best, at points the character felt slippery and sluggish simultaneously. There was plenty of frustration in some of the platforming sections. Especially so when trying to land a tricky or finicky jump. 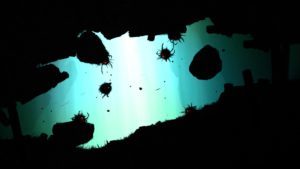 I play games for fun, some are more fun than others and some are difficult. I feel like Feist certainly had the potential for fun. In creating an ‘Insane on Gears of War’ level of AI and difficulty, Feist has seemingly sullied that potential. Moreover, the apparent ‘trial and error’ gameplay style became tedious quickly and was infuriating at points. Not that it’s a bad game, I just feel that the handling, brutality and little niggles dampen the experience. I would like to acknowledge the efforts of the development team at Finji; Feist certainly looks the part. It’s probably one of the best looking games in recent memory for me, but I didn’t have fun after the initial intrigue wore off.