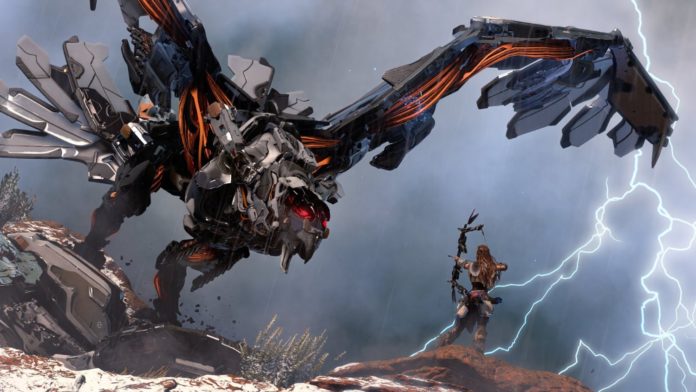 Time to celebrate PlayStation fans! There’s only a few days left before Horizon Zero Dawn makes its grand entrance into the wild. To celebrate Sony have released an impressive new launch trailer over on YouTube.

Unless you’ve been living with Dalai Lama you should be aware of Horizon Zero Dawn. If not, let us fill you in. The games revolves around hero Aloy, a hunter and archer living in a world overrun by robots, many resembling dinosaurs. Having been kept away from the real world her whole life, Aloy decides she needs to explore and experience the true world. Aloy makes use of ranged, melee weapons and stealth tactics to combat the robots, whose remains can also be looted for resources. The game features an open world for Aloy to explore, divided into various tribes whom you’ll encounter as you progress through the game.

You can check the out the very impressive trailer below:

Lots of celebration of the coming of a potential savior in Aloy? The trailer shows off a lot of the environments you will get to explore in the world. It is a supremely pretty game and the combat and mechanics just look stellar.

The game is receiving rave reviews across the board. I haven’t seen lower than a nine out of ten so far! Developer, Guerilla Games, have really cranked it to 11 to make this PlayStation 4 exclusive a hit. If the reviews are to be believed, we may be about to witness the beginning of a new franchise! Though, of course, we will have to see what the gaming community think.

Horizon Zero Dawn launches exclusively for PS4 on February 28th in North America and March 1st in Europe and the UK. It will also release in Japan on March 2nd.

Keep an eye on RGM, we’ll be bringing you our review soon!