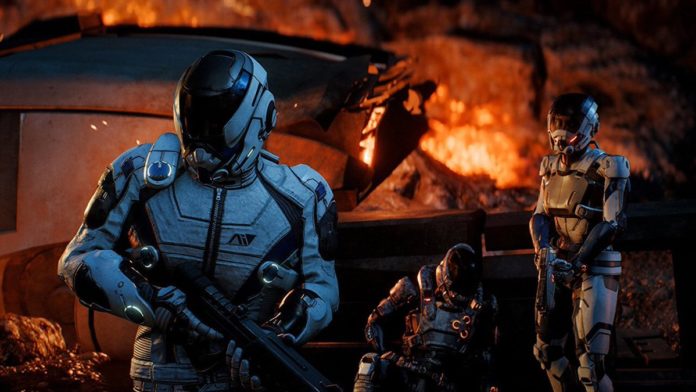 Although Bioware has been accused of playing coy with the limited gameplay footage so far, they seem intent on changing that with their new Gameplay series. On the official Mass Effect FB page and Youtube channel, they’ve released their first video in their latest video series where Andromeda‘s gameplay is the focus. The video offers up the most substantial look at the game yet with plenty of shooting, melee, and biotic abilities put on display.

It seems that Mass Effect: Andromeda will offer players a wealth of options when it comes to taking down enemies. The numerous weapon sets with varying forms of ammo and numerous melee options look the most impressive in terms of variety and promotion of player choice. The Milky Way weapons will use bullets, so the weapons will never overheat but you, in turn, have to make sure you don’t run low on ammunition. Then there are the laser-centric weapons that utilize beams and energy, allowing you to shoot at will until they overheat. Helius weapons have slower projectiles, but have heat-seeking abilities, allowing players some accuracy mistakes. Some other Helius weapons have a charging system, allowing them to build up power as you charge it. There are no class-based weapons. All weapons will be available to each player, regardless of selected class.

It doesn’t stop there, as melee weapons were shown off after that. Weapons like hammers will hit the hardest, but move the slowest. Swords and shivs will be the faster, more immediate option, especially when in stealth.

Next up was the skills selection, which has three categories: Combat, Biotics, and Tech. All weapon and biotic abilities will be available to equip and use. Combat focuses on shooting improvements and access to stronger weapons, explosives, and gear. The Tech abilities focus on experimental weaponry and additional strategic abilities for your squad. If it doesn’t sound that intriguing, upgrading your Tech abilities gives you access to the Flamethrower and Ice Beam abilities. Finally, Biotic abilities allow you to take control of enemies using abilities like Pull, Throw, and more as you dominate the battlefield. Pull and Throw allows you to fully control enemies in the air and throw them wherever you please.

The video concludes with a look into the many possibilities that can occur within each combat experience. It’s clear that the devs have worked to ensure that the gameplay feels as fresh and varied as possible. In the new open world environments, against the many enemy types, it’ll be fun to experiment. This Gameplay series should offer players the substantial gameplay that they’ve been demanding since that first gameplay trailer. In the meantime, stayed tuned for more as this new series helps make that wait for March 21st more bearable.

Have you preordered your copy yet? What do you want to see in the next Gameplay video? Let us know in the comments below!