After taking a break over the Holiday Season, we’re back for RGM Gaming History. A loving look back at the world but more importantly the gaming world in a month in the past. This time, we’ll be looking back at June 1999.

June 1999 is almost 18 years ago now. I was but a boy, just near the end of Year 7 (6th Grade) and starting to feel more like a young man. Enough about me though, around the world there were some big things happening. The Bhutan Broadcasting Service finally brought TV to the Kingdom of Bhutan. A jailbreak in Brazil saw 345 prisoners escape. A peace agreement was reached in the Kosovo War and Stephen King was run over. Andre Agassi and Steffi Graf won the Men’s and Women’s French Open and the Dallas Stars won the Stanley Cup.

June 1999 in gaming would have been fairly quiet, were it not for the release of some amazing games. Let’s have a look at 3 of the biggest games to come out in June 1999.

Trailer courtesy of Gameboy Tester on YouTube. Driver, or Driver: You Are the Wheelman – seen by many as a forerunner to the way Grand Theft Auto would evolve. Driver was the tale of John Tanner, an undercover NYPD detective infiltrating the mobs in New York and impressing by driving in difficult missions. A very well received game with an overall score of 87/100 on Metacritic for the only console game in this article.

Trailer courtesy of SHIBBY4K on YouTube. Descent 3 was classified as a First Person Shooter, but it’s much more than that. If anything it’s a combat flight simulator and the first in the series to let you play online with “modem internet play” as well as letting you “move seamlessly from inside to outside”. Following on straight after the events of Descent II, this is a sci-fi game mainly set on Mars and its moons in a future version of the Solar System. Again, this game was very well received by critics, with a score of 89/100 on Metacritic.

Trailer courtesy of Ollierockon Productions on YouTube. Developed by Bullfrog Productions, the studio that brought you Theme Park and Theme Hospital comes Dungeon Keeper 2. Essentially a management game set in a dungeon, this real time strategy was notable for it’s excellent gameplay and use of dark humor. Nominated for a BAFTA, Dungeon Keeper 2 scored highly with all reviewers of the time, with a rough average score of 9/10. 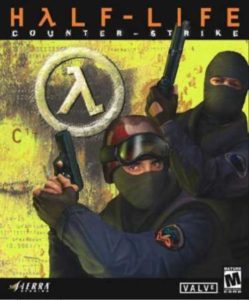 Where usually I would put up a trailer for these games, with Counter-Strike I cannot. There is however a simple reason for this. It started life as a mod for Half-Life. I would hope that the majority of you are aware that the game that spawned one of – if not THE – best played first person shooter game franchises of all time didn’t even start life as a “proper” game. Let me just clarify this. At the time of writing (9:33pm GMT, Sunday February 5th 2017) there are exactly 519,684 people playing Counter-Strike: Global Offensive on Steam. This is a game that has been out for over 4 years. The original Counter-Strike, meanwhile currently has 20,134 players. That’s more than Total War: WARHAMMER, XCOM 2 and The Elder Scrolls V: Skyrim Special Edition. Created by a pair of modders who went on to work for Valve thanks to it, Counter-Strike became a global phenomenon which helped to put Valve on the map and was a big part of the foundations of Steam. Counter-Strike was lauded by critics as well, with an overall score of 88/100 on Metacritic.

There we have it, another month bites the dust in RGM Gaming History. Which was your favorite game from June 1999? Let us know in the comments below, the RGM Forums or on Twitter. If you like what you’ve read then feel free to share this article on Facebook, Twitter, Google+, Pintrest or Reddit using the buttons available!