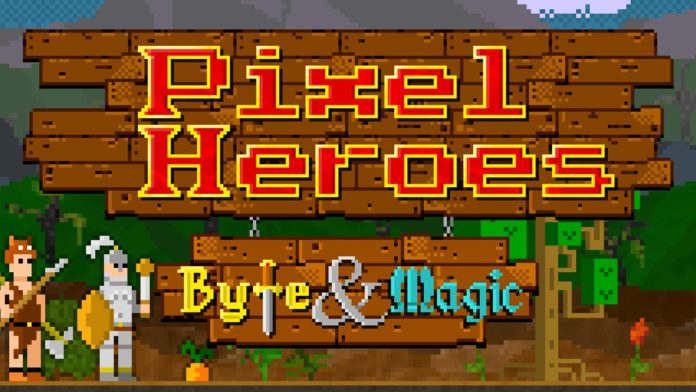 In this era of lush HD graphics and spectacular open worlds, it may seem almost comical that there is still a substantial market for the retro 8bit turn based RPG that some of us grew up playing in the 1980’s and 90’s. I have many great memories of embarking on epic quests with an eclectic party of adventurers to save the land from an ominous threat. Classics like Sega’s Phantasy Star and the first Final Fantasy games on the NES provided some of my fondest gaming moments. By today’s standards, these games may seem archaic but new titles in the style keep popping up. There’s someone out there who still enjoys them. Pixel Heroes falls squarely into this category. 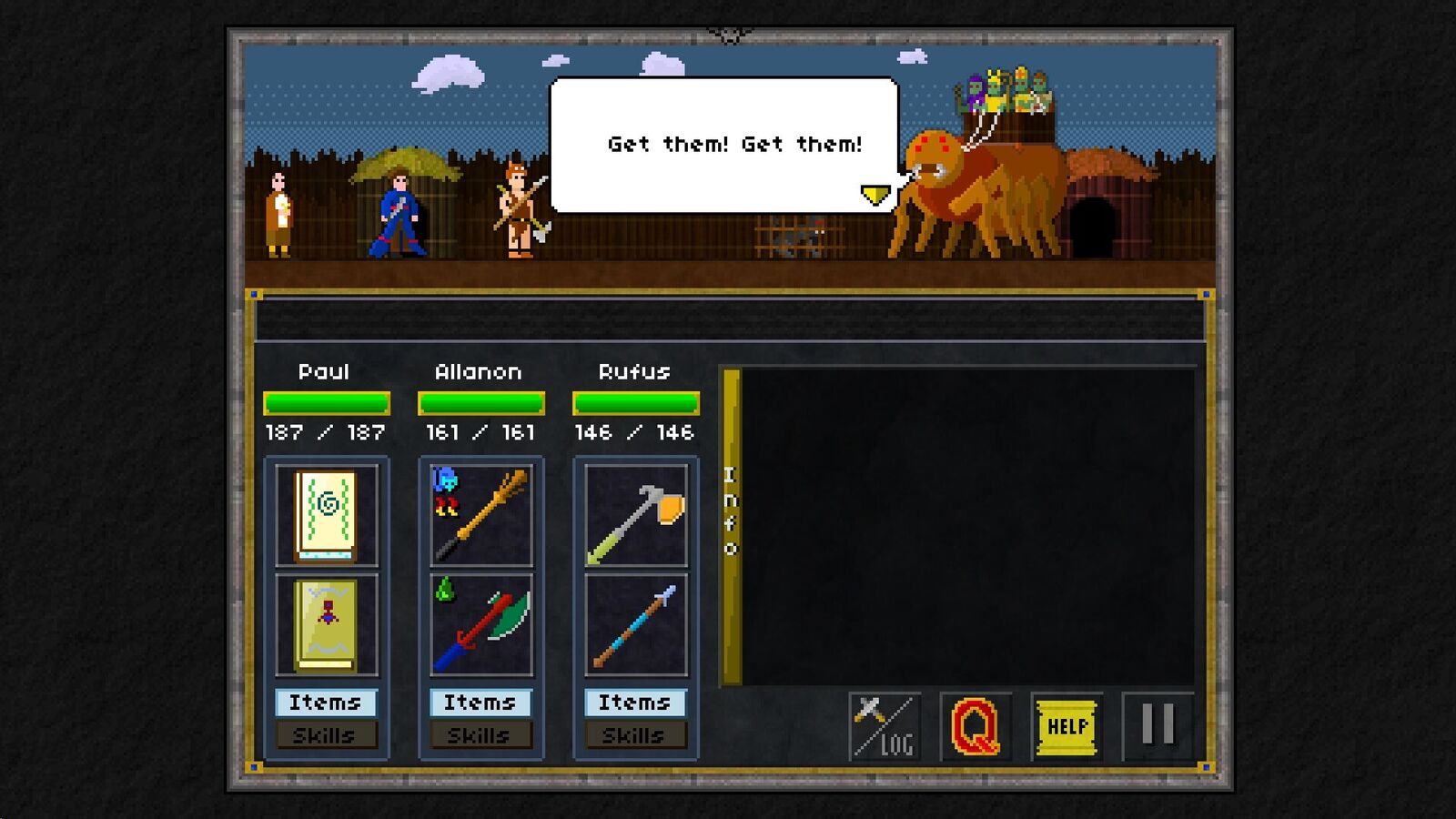 A curious fusion of nostalgic turn based shenanigans and the modern features of a rogue-like, Pixel Heroes is an unusual beast that tries to pay homage to that classic style while attempting to add a contemporary twist. Due to the randomized nature of things, there is no overarching story to kick off proceedings. This adventure begins in a tavern, which is where all the great journeys start, with a frothy mug of ale and a needy NPC. You will be appointed a quest and must assemble a band of hardy fighters to take on a dark threat to the land.

Your party of three heroes can be chosen from a selection of classes, all with their own strengths and weaknesses. All the usual suspects are present here. The gruff dwarf fighter with his giant axe, the lanky ranger wielding a bow and the cloaked mage steeped in magic. As you progress, the class alternatives become much more diverse with some intriguing options available. However, gaining access to the best classes requires fulfilling challenges associated with combat or gameplay, some of which are seriously difficult. 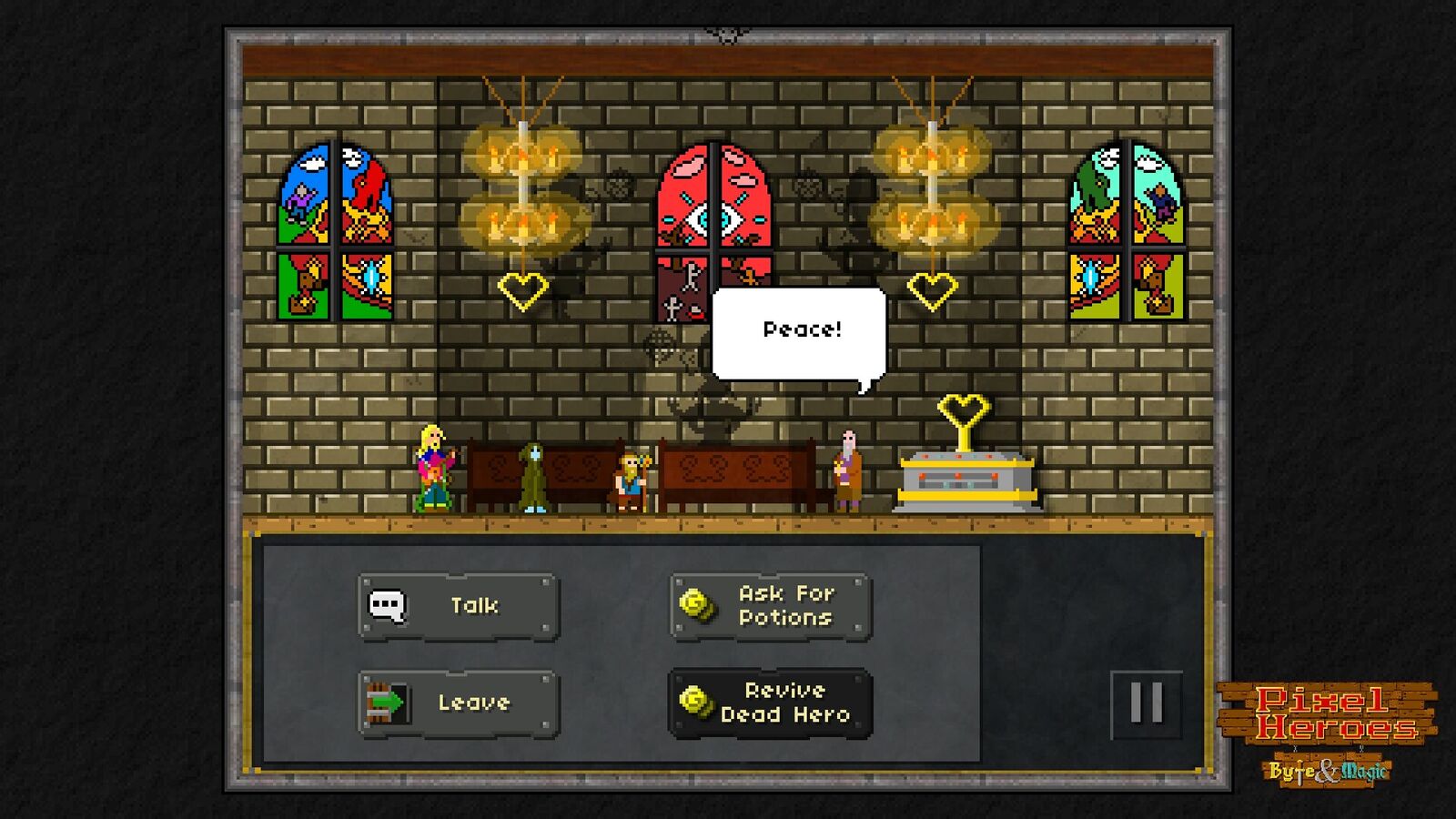 Once your party is ready to roll, it’s time to grab a quest from a nearby NPC. This is where the real bulk of gameplay takes place in Pixel Heroes. Quests will take you out into the countryside on a trek to a dungeon full of peril and treasure, in an effort to fulfill the quest objective. This usually amounts to annihilating whatever crosses your path en route to a boss monster who guards the item/treasure required. Just like the classic RPGs from the past, combat is a turn based affair. It proves a fun experience with each hero having a chance to strut their stuff. The fighting itself is quite shallow, following the same procedure for every battle. Individual classes have two special moves that serve to mix things up a little during the melee. Despite this, the action becomes tedious and repetitive quickly.

With three campaigns of increasing difficulty, each with six separate dungeons to explore, Pixel Heroes has plenty of content to hack through. Each campaign also boasts a special end-boss dungeon that will require some clever strategy and combat prowess to defeat. While I’m a fan of the permadeath element that rogue-likes are known for, losing your party means they are gone for good and you will need to start at the beginning of the entire campaign. After trawling through the same stuff three of four times, it gets boring fast, especially the first few dungeons. Pixel Heroes really benefits from being played sporadically in short bursts; playing for any prolonged period had me reaching for the off button. 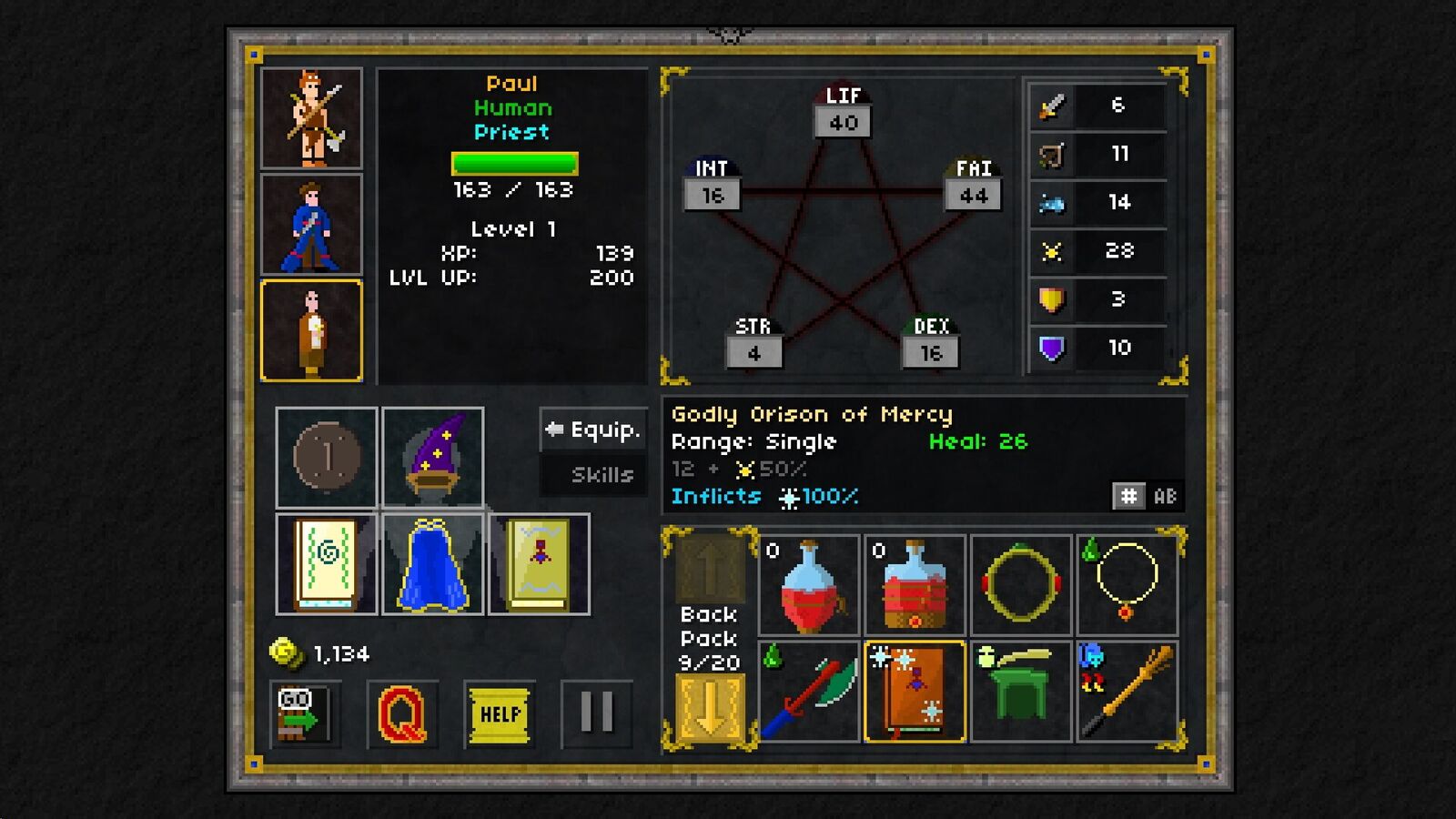 One of the best aspects of Pixel Heroes is the randomized loot because, in all honesty, why would you slog through a dingy, baddie infested crypt if there were no shiny baubles at the end. There’s a huge variety of equipment on offer here and it comes in all flavors and colors. Your heroes gear must be managed effectively as each monster you fight comes with it’s own strengths and weaknesses. Some of them, usually bosses, are effectively immune to certain kinds of damage. Therefore, it’s imperative you don’t embark on a dungeon crawl with three pure physical damage dealers. Or just mages dealing magic damage. You may find the critters can shrug off all your best attacks, leaving you with no avenue of offense. Diversify your approach and before long, you will be slaying with the best of them.

Unfortunately, the constant stream of loot calls to light an issue with inventory management in Pixel Heroes. After a few battles, you will invariably find your bags full of treasure.  The game then halts progression until you create some space. The only option is to dump what you don’t think is useful and once you do, it’s gone forever. This was especially irritating on more than one occasion for me. I dropped a piece that specialized in a certain damage type only to find the next boss was weak to that element. This commonly lead to a party wipe and restart. Get used to the arbitrary nature of Pixel Heroes and it’s random gameplay dead-ends. Sometimes you can only hope that you strike the right conditions and equipment for victory. 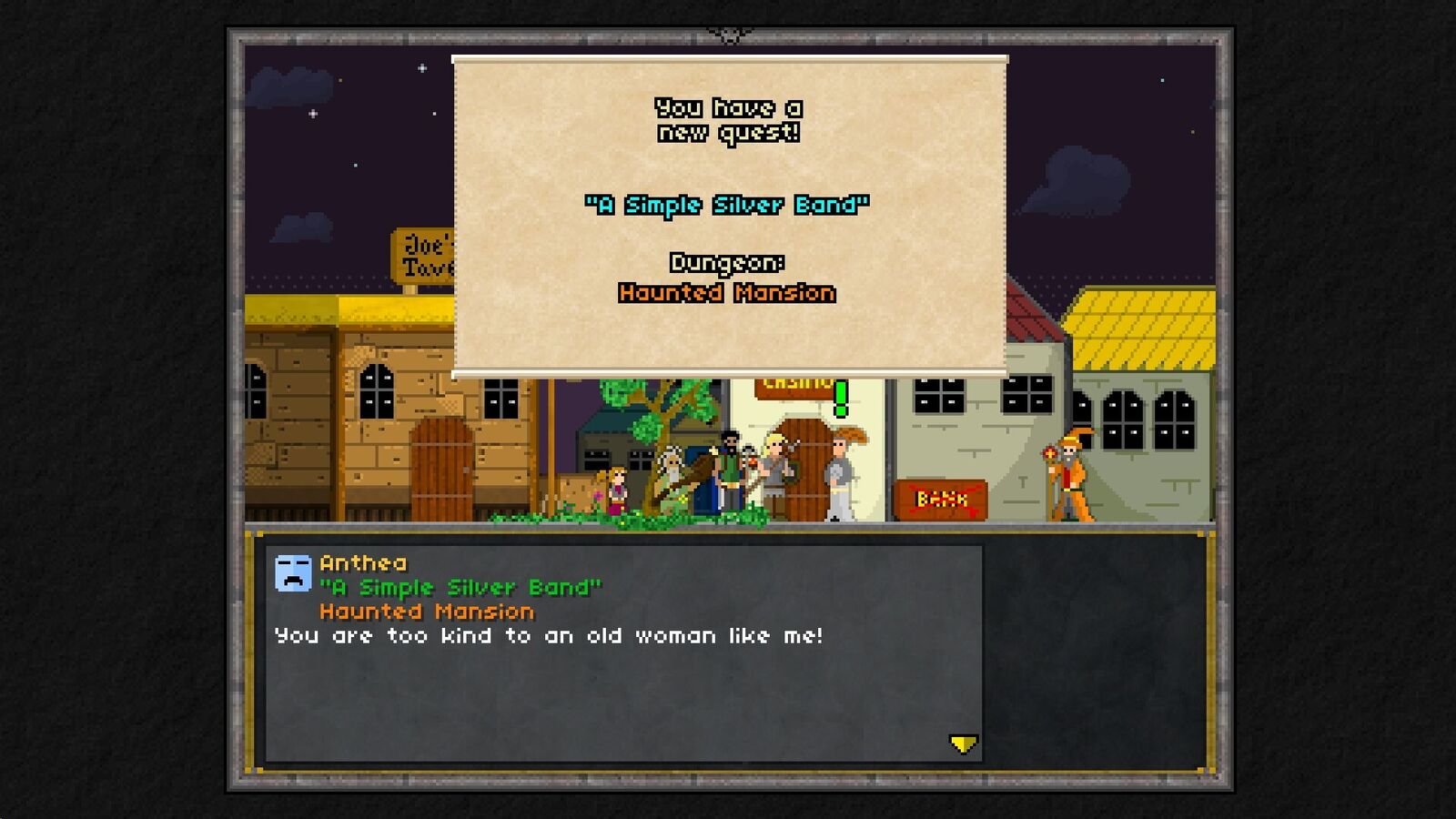 For a game inspired by turn based RPGs of yesteryear, Pixel Heroes nails the aesthetic of those old classics. Pixellated character models and blocky environments are the norm here and they’ll have you waxing nostalgic straight away. Everything is wonderfully colorful and full of humorous personality. Even the music and effects are delightfully wistful, although the chirpy tunes do get a little monotonous after a while.

Pixel Heroes excels at emulating the classic RPG formula from the 80’s and 90’s, albeit with a cool rogue-like twist. It certainly has some flaws. It’s touchscreen mobile roots become more apparent the longer you play. However, those with a love for past games of this type will benefit most from what it has to offer. So finish that frothy mug of ale and get adventuring!