The Walking Dead has an amazing following. People are so passionate about the series that they certainly sound off when they aren’t happy with a particular direction the show takes. With the first half of season 7, it felt like people were getting dissatisfied with the way the show was moving forward. After the explosive first episode where Abraham and Glenn got the mother of all headaches and the sheer intensity that flowed through that episode it was understandable that following episodes would not be able to maintain that level.

I had really enjoyed the change of pace that the first half of season brought; introducing new locations and characters, whilst developing the conflict and submissiveness Negan and The Saviors create. In fact, despite some people’s whining, I think we needed this submissiveness and change of speed. Rick and the gang at Alexandria were certainly a force to be reckoned with. They perhaps needed to be ‘under thumb’ so they were more appreciative. Plus, without that oppression we wouldn’t be where we are now. Ready to fight back, especially following the events of the last episode.

This episode’s main focus was on the building up an army to repel The Saviors. Rick and co. began their quest by appealing to Gregory, Hilltop’s leader, to join forces with those of Alexandria and fight back. Despite some good arguments and a whole lot of frustration, Gregory refuses. On their way out, the residents of Hilltop, thankful to Maggie, Sasha and Enid, state they would give their support, regardless of what Gregory says.

Jesus takes the crew to the Kingdom to meet King Ezekiel and plead their case, asking for their forces and weapons to help fight. A great sequence upon meeting King Ezekiel occurs, including a humorous moment in Jesus neglecting to mention the whole tiger thing. Rick also told a great tale to hammer home his point about the rewards that can come from taking a chance. This is where the title for the episode comes from. Unfortunately, despite Rick’s effort, King Ezekiel denies Alexandria their fighting support. He did, however grant Daryl ‘asylum’ allowing him to hide his escape safely. This is because of the Kingdom’s agreement with The Saviors that does not allow any Savior to step foot in the Kingdom, to which Rick rightly responded “for how long”.

A really cool plot device that occurred in this episode was the fact that Jesus had managed to obtain one of The Saviors long-range radios. This provided a great element to it as I was constantly aware of The Saviors presence, especially when the various settlements were discussing their being overthrown. This made itself known when they Negan, over the radio, ask for a search party of The Saviors to try to find Daryl, now they know that he has escaped. Of course they will be heading to Alexandria. So now Rick and the gang must return to Alexandria before Negan’s crew arrive and notice something’s up.

On their way back they happen upon a blockade of cars on a highway. I immediately thought that, given previous episodes, The Saviors knew the Rick’s crew were up to no good and had prepared for them. fortunately this wasn’t the case, this time. As part of this blockade, they realize that it was a trap for a herd of Walkers. An explosive one. There are a mass amount of RPG shells and sticks of dynamite wired up. The group saw their chance and made to ‘liberate’ the explosives to help bolster their firearm capability. Wondered where the Walkers were at this point? Well wonder no longer, here they come, their ears must have been burning!

So it’s a race against time; the team need to steal the explosives, move back the cars to their original position to allay suspicion from The Saviors and then get away, safely. Here comes the episodes point of tense and action. At first, you think they have plenty of time but damn those Walkers move quickly. Here you see some desperation from Rick, he wants badly to get some advantage against Negan and this almost becomes their undoing. Rick does admit that he pushed it. Here Michonne points out that, regardless of this, they succeeded in getting the explosives and that he should smile. This is more relevant than you originally might think as the episode progresses. 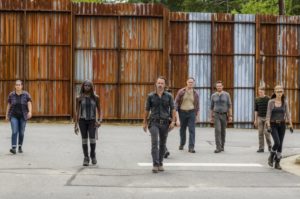 They arrive back at Alexandria just before The Saviors who then proceed to tear through the community, looking for Daryl. Of course, we know he’s not there, but given the unpredictability of The Saviors, I was still on edge as to what might happen. Luckily, for once, they do their checks and leave without too much threat. Though they do notice the bareness of the pantry shelves. Though this is Father Gabriel’s fault. At the beginning of the episode we learn that Father Gabriel abandons his watch, steals loads of food from the pantry and a car and seemingly drives off. Abandoning Alexandria.

Upon realising this to be the case, Rick sets out to find Gabriel after discovering the note ‘Boat’ in one of his notebooks. Believing that this to be the boat that Rick and Aaron searched a few episodes back. Several characters go with Rick and they make their way out into the woods towards the boat. As they track Gabriel, they find their way to an overgrown parking lot only to be ambushed by a small army of people with lots of weapons. They all look mean. Upon surrounding Rick and the others, the camera pans in to focus on Rick who does nothing other than get a big smile. What he is smiling out? We have to wait till the next episode it seems.

There were a few other elements touched on in this episode. We see the reuniting of Morgan with the team, who remains at The Kingdom. He also fills in Daryl and Rick about Carol and how she was resident at the Kingdom but has since left. This is a slight lie, as we know Carol is in The Kingdom, but tending to herself, as we see in a short scene with a young training Benjamin. We also see a bit of drama between Aaron and his partner, Eric. Eric manages to portray concerns about what Rick is planning to take on The Saviors and what that might mean. I took this to be a way to emulate the feelings of other residents of Alexandria, something which will probably be addressed in a later episode. We also, finally, get to see some spoken words from Daryl. More than one or two words. We get some emotion other than solemn and quietly defiant. Though I do feel for Daryl, reunited with Alexandria only to be left at The Kingdom.

Overall, I would say that Rock in the Road was a great return for The Walking Dead. It had a great sense of rebellion, but constantly had the feel that they were on borrowed time in their escapades. I was always aware that The Saviors could have turned up at any point. There was also a great sequence involving the Walkers which I really enjoyed. The rebellion has begun, but how will it continue? And, who the hell was the that at the end of episode 8, still none wiser at this point.