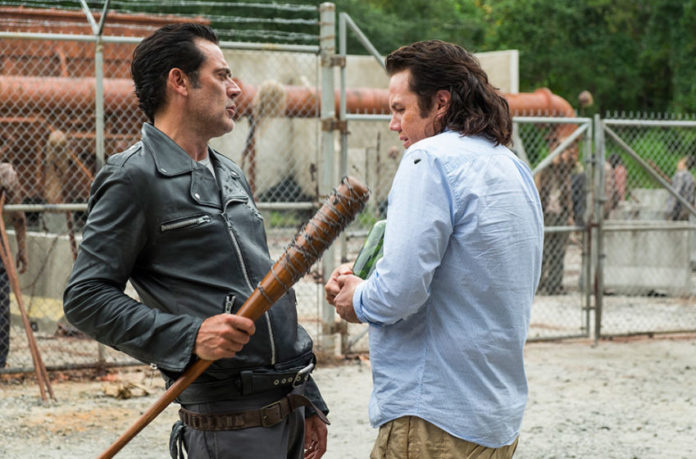 This week’s episode of The Walking Dead, “Hostiles and Calamities”, changes perspective a touch. For the first two episodes past the mid-season finale we have enjoyed seeing Rick and company band together. Their goal, to take on and defeat The Saviors, freeing them from their oppression and servitude. We know things are in the pipeline. We know they are building up a resistance. And we know that there has always been the ever pending threat of Negan and The Saviors.

Though we saw them briefly in episode nine, when some of The Saviors came looking for Daryl, we haven’t heard much from them. We know they know Daryl has escaped so what have they been up to? How is Eugene surviving under Negan’s tyranny? Turns out he’s doing just fine!

The episode starts with Daryl having just got away. The Saviors have discovered the dead body of the rotund Savior he killed in order to steal away a bike. Dwight, or ‘old man burny face’, arrives to the commotion. He realises that the bike being taken to be very significant and rushes to ‘the hole’ to confirm if Daryl has indeed gotten away. Of course, we know that he has. Dwight soon learns that this is the case too, as well as the fact that Daryl has been in his room. It’s not long before Negan and his cronies have broken into Dwight’s room and started decking him. Being responsible for Daryl is Dwight’s job and he has not been successful.

Hostiles and Calamities is a great episode for character development. We learn a lot more about Dwight. An interesting nugget of information is that we find out that Dwight was in the position he had Daryl. In ‘the hole’ and being systematically tortured until he “became” Negan (i.e. signed onto Negan’s way of working). Questions need to be asked, Negan must know how Daryl escaped, who let him out? Negan suspects Sherry, one of his wives, as she has mysteriously vanished from the compound too. Dwight is certain that it wasn’t Sherry. Later on we learn that Sherry is Dwight’s original wife and she is Negan’s wife to save Dwight’s life. 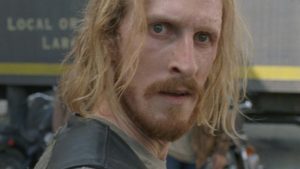 Negan tasks Dwight with finding Sherry. Taking the note he found on the floor of Daryl’s cell, he heads off into the wild to find Sherry and bring her back to the compound. Dwight affirms to Negan that he knows where to find her. He indeed does know where to go and winds up at a worn down house.

Walking through the house, Dwight comes across photos of himself and his wife and the home they once had. Whilst he is exploring, Sherry’s voice can be heard speaking to him. The camera occasionally pans to a letter to Dwight, one from Sherry, one that she reading to him. In it we learn that it was Dwight who was resistant to The Saviors and it was Sherry’s idea to join the them. She apologizes to Dwight for making him the man he was and for releasing Daryl. Daryl reminding her of someone who Dwight used to be.

There is a particular poignant moment here, the letter alludes to Dwight as he used to be; he has a terrible memory, excusing him from not remembering for turning up at the house when they got separated. They were to meet with beer and pretzels and get away. As the letter reaches its conclusion Dwight pulls out a six-pack of beers and a bag of pretzels and leaves them behind. At this point I started to feel for Dwight, as a family, they were doing everything they could to survive, which also meant joining Negan, which systematically was what destroyed his family.

The sympathy for Dwight soon passes however. On returning to the compound he is visiting the doctor to whom he reveals that he found Sherry and killed her. Creating a ruse that she had stumbled into a pack of Walkers. Later on the in the episode there is a gathering of all of The Saviors and Negan wants to know why the doctor had let Daryl escape. Wait, what?! I hear you cry! Dwight had planted a note he found in the house from Sherry, one with the same writing as the note he found in Daryl’s cell, in the doctor’s office.

A fairly intense scene follows with threats from Negan and an incredibly hot iron. The doctor is forced to confess to a crime he did not commit. Negan repents and removes the threat of the iron…before launching the doctor directly into the furnace in the centre of the room. All the while Dwight helps Negan out, again his right hand man. Scumbag. The whole scene a terrifying lesson for Eugene, made to watch from above.

So what is Eugene up to? Arriving back at the compound near the beginning of the episode we see him taken to his holdings. Given what Eugene knows of Negan and The Saviors at this point his current emotional state is spot on. He is purely terrified. Arriving at a comfortable and well furnished room in the compound Eugene is horrified before he knows what’s on the other side of the door. Eugene is treated well and shown around the compound. There’s some actual laugh out loud moments on a couple of occasions. One of the best being Eugene asking for lobster when told he can have anything he wants to eat with the response being exactly what you would expect in the world of The Walking Dead. 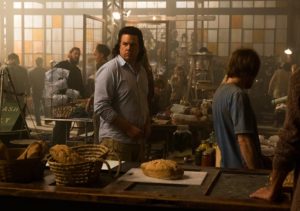 The Saviors are being nice, they’re treating Eugene well. A totally different tact to how they were with Daryl. In fact, the complete opposite. It is evident that Eugene and Daryl’s demeanours are polar opposites. Daryl was defiant and strong, Eugene is outwardly afraid and timid. Negan wants Eugene as a recruit, he wants him as a Savior. There is an excellent scene that was touched on during the week in the teaser trailer that you might have seen. I want to call it the “mister smarty-pants” scene.

Jeffrey Dean Morgan is just phenomenal as Negan in every scene he is in, but this one is great. After demonstrating his collective power, getting everyone to announce that they are “Negan” he asks Eugene to solve a Walker problem. By putting Eugene on the spot, Negan is able to assesses Eugene’s ability to solve problems and show off his usefulness. Solving a problem for Negan relating to his Walker barricade creates a hugely ingenious but fiendish solution. Or as Negan puts it “Not just smart but totally badass”. I couldn’t help think of how this new development may spell doom for a member of Rick’s resistance. For his ingenuity Negan rewards Eugene with some of his wives for a night of dinner and entertainment, “but no sex“.

Here we meet three of Negan’s wives. Two of them are willing wives of Negan, the third, Amber, less so. A wife of necessity, so that her mother could get medication to live. We learn that Amber wants to “end it all” and after the wives find out how smart Eugene is they want him to help her. They ask Eugene to create some medication to help kill herself. Eugene is heavily reluctant but they manage to talk him around by appealing to his human decency. We know, of course, that if Negan finds out or the plan is a success that he will not be happy (to say the least).

In a particularly cringey scene that follows, we see Eugene become super confident in front of other workers in the compound. He acquires the items he needs to create the suicide pills and does his best Breaking Bad tribute and succeeds in creating the pills. After the scene with the doctor and the furnace, Eugene realizes that the wives don’t want the pills to put Amber out of her misery. They want the pills for Negan, to put them out of his misery. Eugene refuses to give up the pills. 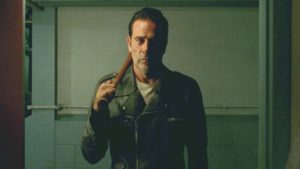 Later on, Eugene is enjoying his first pickle of the episode. I felt this was quite symbolic, he never felt comfortable to eat one of his supposed favorite items until now. It seems as though he has accepted his new fate and where he is. At this moment, Negan visits Eugene to tell him that he doesn’t need to be scared anymore and to ask one very difficult question. Before Negan can even finish the question Eugene enthusiastically answers: “I am Negan, I’m utterly, completely, stone cold Negan. I was Negan before I even met you properly, I just needed to know. I’m Negan.”

Cut to the next scene, Eugene is supervising the workers create his new molten liquid solution for the Walkers. He introduces himself to Dwight and the episode ends.  It is an interesting dynamic at this point because we are somewhat questioning Dwight’s loyalty and here we see Eugene’s almost complete following. Is Eugene playing the long game, has he gone in as a double agent almost? He is a “smarty pants” after all. Eugene is a difficult characters to read, annoyingly. He could well be playing Negan and this could be a contact to bring them down from the inside. However, given his open cowardice he could well have just found a new home. One where he is able to use his intellect more creatively, one where he is safe and has protection, as well as comfort.

If I had to pick an issue with this episode I would have to say it was the fact that Negan didn’t realize that Dwight was fabricating the fact that he didn’t kill his wife. Though in that scene Negan did allude to the fact that if Dwight was lying, he would find Sherry and would not stop until he did. It’s always been to me that Negan was incredibly astute and clued in. I would have assumed he knew what was going on. Perhaps he does, but he has to act on the information he has at the time and maybe he can’t be sure?

Hostilities and Calamities was a great episode. It really showed some great depth to Dwight and Eugene. What really struck me was the fact that I was under the impression that any of the wives presence with Eugene was a test for him. Even though it never was. The Saviors have made me so paranoid about what they know and don’t know, it just keeps me guessing. Further to that it has some sinister moments and any scene with Negan is just stellar. So of course, an episode where he is present regularly is always a delight. It is going to be interesting to see what happens next. Negan has a powerful ally in Eugene, if that’s what he is. His ingenuity could certainly cause problems for Rick, which is probably why Eugene is still alive.